Noise as a hazard to employees

High levels of noise can produce permanent hearing damage and a conscientious employer will always bear this in mind when setting up a compressed air facility. Apart from his moral obligation, there is legislation to obey and codes of practice to which he has to pay attention. Some of these are:

• Guidance to the Noise at Work Regulations. Noise Guides I to 8 published by HSEBooks

• Guidance to the Personal Protective Equipment Regulations 1992 published by HSEBooks

Noise as an environmental problem

The manufacturer or the user of noisy equipment has to consider the effect it will have on persons other than the work force for whom he has primary responsibility. The European Community has taken the lead in ensuring that only equipment meeting specified maximum noise levels are acceptable in the countries of the Community. Some of the relevant legislation and Codes of Practice are:

• British Standard 5228:1984 Code of practice for Noise Control on Construction and Demolition Sites

Further information may be found in specialist publications, particularly the Handbook of Noise and Vibration Control (published by Elsevier Science Publishers Ltd) to which the reader is referred. This chapter is concerned mainly with the problems of noise reduction in compressed air instailations.

The Health and Safety Commission take the view that an exposure equivalent of 90 dB(A) over an 8 hour day is the maximum level to which a worker should be exposed. Silencing techniques should be directed towards achieving rather better than that (to ailow for deterioration over the life of the compressor). Bear in mind that the noise from a compressor wiil add to any other noise sources in the vicinity.

The first step to take in noise reduction is to perform a survey of the sources of noise. A simple spectrum analysis of the noise in octave bands wiil indicate which frequencies predominate. This may be foilowed by a closer frequency analysis to determine the existence and magnitude of discrete frequencies. This survey should be done for ail modes of operation, eg on-load, off-load and transition; the on-load condition is not necessarily the noisiest. The environment in which the compressor is placed can influence the noise levels. It is obvious that other sources of noise could confuse the readings, but what may be less obvious is that the reflectivity and the absorptive character of the walls or other structures may distort the spectrum from what would be produced by a compressor working in a free-field. It may not always be possible to perform the tests in an anechoic chamber but that would be the ideal.

Having performed the survey, it should be possible to identify the worst noise sources, which should be tackled in order of intensity.

The intake system wiil include some or ail of

Most compressors wiii incorporate an intake filter, which wiii by itself give some noise attentuation. This may be insufficient, in which case an intake silencer may be needed.

A reactive silencer produces its effect by interference and reflection of the sound waves (an automobile silencer is reactive). A simple silencer would include an expansion chamber with a tail pipe, which may be sufficient by itself if one frequency dominates the spectrum. For multiple frequency suppression the number of chambers has to increase; design details of the method of analysis can be found in specialist publications. The lower 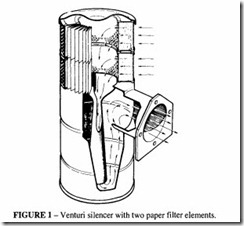 the frequency that is to be suppressed, the larger is the vessel required, so iflow frequency noise is suspected at an early stage in the design, provision should be made for a reactive silencer and space can be set aside for its installation.

An absorptive silencer produces its effect by suppressing internal reflections with a porous ascoustic material lining the inside of the silencer cavity. When using this type of silencer, precautions must be taken to ensure that the material does not become contami­ nated by dust, water or oil which will not only reduce its effectiveness but may also be a place where fires start. Under severe vibration the material may disintegrate, discharging debris into the intake of the compressor.

Another type of reactive silencer is the venturi tube, which is particularly effective but expensive. The main advantage of a venturi is that the pressure drop through it is lower than with other kinds of restrictions, so it is particularly suitable for intake silencers where intake pressure losses could seriously affect the compressor efficiency. The flow velocity can be higher than with other silencers. An example of a venturi silencer combined with a filter is shown in Figure I.

Guidance on the size and velocity of air flow in ducts is given in the chapter on Compressor Installation. A general rule to follow is: avoid coincidence of mechanical noise and acoustic frequencies, otherwise resonance of the pipe system can amplify rather than attenuate the noise.

It sometimes happens that a common intake system may supply more than one compressor. Such an arrangement should be avoided, as there is always the danger of amplified noise when pulsations of two compressors are in phase.

One should always attempt to design the pipework system so as to avoid undesirable frequencies. This is difficult, and it may turn out that when the installation is finished, it is unexpectedly noisy. One may then be faced with having to apply remedial treatment; this can be done by adding acoustic lagging to the outside of the pipes. Lagging should be made of a porous material such as glass fibre attached to the pipe, with an outer layer of dense cladding such as aluminium, steel or leaded plastics.

Compressor control systems that rely on throttling the intake may result in a high frequency note under part-load, partially throttled conditions. It may be necessary in this case to try a different valve.

Casings can be very efficient radiators of noise, particularly if, in an attempt to reduce cost, the thickness has been reduced to a bare minimum. The thicker the sections and the more inherent damping there is in the material the better are its acoustic properties. Cast iron is a very good material in this respect. It is not generally very successful to try the application of acoustic cladding to a casing after manufacture. It is likely to be expensive and may also act as a thermal insulator, raising the temperature of the compressor. Water coolingjackets act as a natural noise barrier and it may be better in some circumstances to use water, rather than air, cooling.

An acoustic enclosure is likely to be the most effective form of noise barrier. Practically any required attenuation can be achieved by enclosure. Twenty five dB is perfectly possible whereas techniques of noise reduction at source will only give about 5 dB. In designing an enclosure, reference can be made to the Handbook of Noise and Vibration Control. By far the best enclosure is one made of solid brickwork or some other heavy material. This is not practical for a compressor which needs to be moved, so the next best 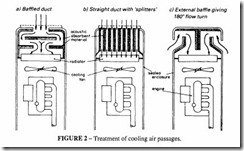 choice is a box made of heavy timber or steel partitions, lined with an absorbent material with no unsealed openings. It is the mass of the enclosure which is the main factor in suppressing the radiation of noise, but unless the interior is lined with an absorbent material, the level inside builds up with the result that the effect of the barrier is less. Cooling air should only be admitted through well-baffled ducts. The benefit of total enclosure can be easily vitiated by small openings for the passage of pipes.

These can be very expensive and should only rarely be considered. It is best to make sure that the interstage pipe is large enough to act as a pulsation damper; it should be a simple straight connection avoiding bends.

After delivery, the air is at pressure so any enclosure is a pressure vessel with all the design limitations that that implies. Whether it be a simple damper to reduce the effect of compressor pulsation or a larger receiver to store a substantial amount of air to meet a variable demand, it will act as an acoustic barrier to noise in the delivery passages. To suppress vibration it may prove necessary to apply treatment to its exterior. Bear in mind that passages up to the cooler will be at high temperature and the treatment must be resistant to heat.

The compressor and its prime mover should be mounted on flexible supports, preferably on a massive base also. Certainly the enclosure should be isolated from the machine proper, otherwise its value as a barrier would be lost. There may be difficulties if the pipe work is rigidly attached to a compressor free to move on its supports, so flexible hoses or bellows should be interposed.

There are several types of isolator on the market. Simple composition pads have a small static deflection but present a high impedance to high frequency energy. Rubber mounts have a medium degree of static deflection, suitable for lower frequencies. Steel springs, and in severe cases air springs, can be used for very low frequency isolation.

Blow-off valves should be equipped with their own silencers. Because they may be intermittent in operation, the noise that they make may not be noticed during a noise survey. An occasional noise may be more annoying to the neighbours than one continually present.

Safety valves only rarely discharge to the atmosphere. For safety reasons they must not be fitted with silencers or any form of piping. Indeed it may be desirable that they should make a noise as a warning. If a safety valve is continually blowing there is a fault in the control system.

Step-up gears are needed for screw compressors and for turbines. Some screw compres­sors supplying dry air also have timing gears. Helical gears are quieter than spur gears and ground teeth than machine-cut teeth. Gear boxes can radiate noise if they are fabricated or of thin section. Cast iron is the preferred material of construction.

Most compressors are now available as packaged units. If the noise level produced by a standard package is satisfactory this must be the first choice. Only if particularly rigorous noise levels are required should one attempt the exercise of making a non-standard enclosure. As indicated above, the environment in which it is situated may completely alter the spectrum from that which has been measured on the same compressor in a free field.

Figure 3 shows an example of a well silenced piston compressor with a noise level of 61 dB(A). It delivers up to 370 1/min 10 bar pressure. The air receiver in this case is external. The noise reduction is achieved by using a high density sound proof material, an integral cooling fan and mounting the assembly on anti-vibration pads. 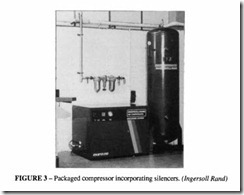