The essential parts of a piston-type cylinder are a cylindrical barrel, a piston and rod, end caps, and suitable seals. The end caps are attached to the ends of the barrel. These end caps usually contain the fluid ports. The end cap on the rod end contains a hole for the piston rod to pass through. Suitable seals are used between the hold and the piston rod to keep fluid from leaking out and to keep dirt and other contamination from entering the barrel. The opposite end cap of most cylinders is provided with a fit­ ting for securing the actuating cylinder to some structure. This end cap is referred to as the anchor end cap.

The piston rod may extend through either or both ends of the cylinder. The extended end of the rod is normally threaded so that some type of mechanical connection, such as an eyebolt or clevis, can be attached. This threaded connection provides for adjust­ ment between the rod and the unit to be attached. After the correct adjustment is made, the locknut is tightened against the connector to prevent the connector from turning. The other end of the connector is attached, either directly or through addi­ tional mechanical linkage, to the unit to be actuated.

In order to satisfy the many requirements of fluid power systems, piston-type cylin­ ders are available in a variety of designs.

the piston. In some spring-loaded cylinders the spring is located on the blank side and the fluid port is on the rod side of the cylinder.

A three-way directional control valve is normally used to control this type of cylinder. To extend the piston rod, pressurized fluid is directed through the port into the cylin­ der (Figure 6-4). This pressure acts on the surface area of the blank side of the piston and forces the piston to the right. This action moves the rod to the right, through the end of the cylinder, thus moving the actuated unit in one direction. During this action, the spring is compressed between the rod side of the piston and the end of the cylin­ der. The length of the stroke depends upon the physical limits within the cylinder and the required movement of the actuated unit.

The end of the cylinder opposite the fluid port is vented to atmosphere. This prevents air from being trapped in this area. Any trapped air would compress during the extension stroke, creating excess pressure on the rod side of the piston. This would cause sluggish movement of the piston and could eventually cause a complete lock, preventing the fluid pressure from moving the piston. Adequate seals prevent leakage between the cylinder wall and piston. The piston in Figure 6-4 contains V-ring seals that prevent blow-by of hydraulic fluid that would then be vented through the bleed ports.

Most piston-type cylinders are double acting, which means that pressurized fluid can be applied to either side of the piston. In this type of cylinder work is performed in two directions.

One design of the double-acting cylinder is shown in Figure 6-5. This cylinder contains one piston and piston rod assembly. The stroke of the piston and piston rod assembly in either direction is produced by fluid pressure. The two fluid ports, one near each end of the cylinder, alternate as inlet and outlet ports, depending on the direction of flow from the directional control valve. This actuator is referred to as an unbalanced actuator because there is a difference in the effective working areas on the two sides of the piston. There­ fore, this type of cylinder is normally installed so that the blank side of the piston carries the greatest load–that is, the cylinder carries the greater load during the extension stroke.

A four-way directional control valve is normally used to control the operation of this type of cylinder. The valve can be positioned to direct pressurized fluid to either end of the cylinder and allow the displaced fluid to flow from the opposite end back to the reservoir.

There are applications where it is necessary to move two mechanisms at the same time. In this case, double-acting cylinders of different designs are required. Figures 6- 6 and 6-7 illustrate examples of these applications.

Figure 6-6 shows a three-port double-acting cylinder. This actuator contains two pis­ tons and piston rod assemblies. Fluid is directed through port A by a four-way valve and moves the pistons outward, thus moving the mechanisms attached to the piston rods. The fluid on the rod side of both pistons is forced out of the cylinder through ports B and C, which are connected by a common line to the directional control valve. The displaced fluid then flows through the control valve to the reservoir. 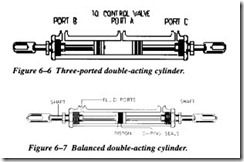