Mason and Smith [20] carried out tests on 25 and 50 mm square section 90° bends with a flow of alumina particles from vertically up to horizontal. The bends were made of Perspex and were constructed with substantial backing pieces in order that the 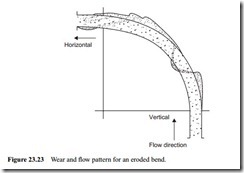 change in flow pattern and wear over a period of time could be visually observed. The results from one of their tests are given in Figure 23.23.

With a new bend the particles tend to travel straight on from the preceding straight pipeline until they impact against the bend wall. After impact they tend to be swept round the outside surface of the bend. They are then gradually entrained in the air in the following straight length of pipe. In Figure 23.23 the flow pattern is shown after substantial wear has occurred. This shows quite clearly the gradual wearing process of a bend and the effect of impact angle on the material in the process. Erosion first occurred at a bend angle of 21° which became the primary wear point, as one would expect. After a certain depth of wear pocket had been established, however, the par- ticles were deflected sufficiently to promote wear on the inside surface of the bend, and then to promote a secondary wear point at a bend angle of 76°.

A small tertiary wear point was subsequently created at an angle of 87°. If such a well reinforced bend were to be used in industry, in preference to replacing worn bends, the deflection from the latter wear points would probably cause erosion of the straight pipe section downstream of the bend. As this pattern of particle deflection in worn bends is now well recognized, some companies manufacture steel bends with thicker walls and a typical example is shown in Figure 23.24. This particular bend is also slightly thicker on the inside surface to allow for the fact that particles can be deflected to the inside surface, as illustrated in Figure 23.23.

The curve in Figure 23.1 of erosion against impact angle, for the aluminium alloy, pro- vides a means by which an interpretation of the type of wear shown in Figure 23.23 can be obtained. The outer wall of the bend presents a surface at a low impact angle to the particles issuing from the preceding vertical straight pipe run, and as Perspex is a 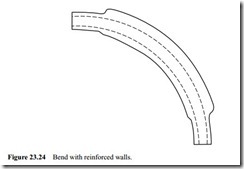 The conveyed material can be seen quite clearly to be deflected out of this primary wear pocket. Due to this abrupt change in direction, however, it is no longer swept around the bend as before, but impacts on the inside surface of the bend. It is then deflected to the outer wall again, and because the low impact angle is maintained here, the erosion at this point is far greater than that at the primary wear point.

Mason and Smith [20] also mention that a conventional bend design, used to avoid plant shut down due to wear, is to reinforce the outside of the bend with a mild steel channel backing filled with a suitable concrete, as illustrated in Figure 23.20a. They included a radiograph of such a 100 mm bore pipeline bend and this showed a primary wear pocket developing in precisely the same manner as for the Perspex bend tested. It is believed that the bend ultimately failed through erosion of the inner surface due to material deflection from the primary wear point.