The pressure required to convey a material through a pipeline can be divided into a number of component parts. The most important are the straight pipeline sections and the bends. For each of these elements there are a multitude of sub variables that can have and influence, but their incorporation necessarily adds to the complication of the process. A compromise is clearly needed in order to provide a quick first approximation method.

A considerable amount of published data exists on the pneumatic conveying of materials through pipelines. Much of it was generated by the author when commissioned by the Department of Trade and Industry in the UK to write the original Design Guide for Pneumatic Conveying, and even more has been generated subsequently. Typical data for the horizontal conveying of material through straight pipeline is presented in Figure 18.2.

Figure 18.2 is a graph of material flow rate plotted against air mass flow rate, which is the usual form for presenting the conveying characteristics for materials. Lines of con- stant solids loading ratio can be drawn quite easily on this plot as they are simply straight lines through the origin. Lines of constant pressure gradient, in mbar/m, are also super- imposed. The data was initially derived from conveying trials with cement and barytes, but has since been found to be reasonably close to that for many other materials.

The data in Figure 18.2 represents the pressure gradient, in mbar/m, for conveying material through straight horizontal pipeline of 53 mm bore. As will be seen, it covers both dilute and dense phase, with a smooth transition between the two. This first approximation method is based on the use of this data and so it will be seen that there is no specific reference to material type, and hence this is one of the main reasons for this being an approximate method, as the title states.

For flow vertically up it was shown in Chapter 14 that the pressure gradient is approximately double that for horizontal conveying and that this applies over an extremely wide range of solids loading ratios. To take account of vertically up sections of pipeline, therefore, the pressure gradient values on Figure 18.2 simply need to be doubled for any operating point on the chart.

For flows in vertically down sections of pipeline the situation is very different. In dense phase flows there is a pressure recovery, such that the pressure gradient has a negative value. For dilute phase flows, however, there is a pressure loss. The transition between the two occurs at a solids loading ratio of about 35 and at this value materials can be conveyed vertically down with no pressure drop at all. Figure 18.2, therefore, cannot be used in this case.

If, in a long pipeline, there is only a very short length of vertically down pipeline, it is suggested that it can be ignored, in terms of the overall accuracy of this method, for both and dense phase flows. If a conveying system does have a significant propor- tion of pipeline which is vertically down, the user if referred to the more detailed con- veying characteristics presented in Figures 11.13 and 14.25.

Material flow rate varies approximately in proportion to pipe section area, and hence in terms of (diameter)2. Air flow rate, to maintain the same velocity in a pipeline of dif- ferent bore, varies in exactly the same way. To determine the pressure gradient for flow in a pipeline having a bore different from that of the reference data in Figure 18.2, both the material and air flow rates should be adjusted in proportion to (d2/53)2, where d2 is the diameter of the plant pipeline in mm. It will be noted that there will, therefore, be no change in the value of the solids loading ratio.

It must be appreciated that along the length of a pipeline, as the pressure drops and the conveying air velocity increases, the pressure gradient is likely to increase. In Figure 18.2 a single value is given for the entire pipeline. This value can be taken to be 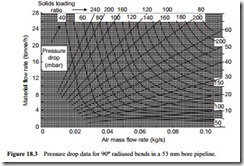 an average for the pipeline, but it is another feature that reinforces the point that this is only an approximate method.

The pressure drop in a stepped bore pipeline can be evaluated in exactly the same way as outlined above. A critical point in stepped bore pipelines is the location of the steps along the length of the pipeline. At each step in the pipeline the conveying air vel- ocity must not be allowed to fall below a given minimum value, otherwise the pipeline is liable to block at that point. The solution, therefore, is likely to be an iterative one since the velocity of the air at the step depends upon the pressure at the step.

Pressure drop data for bends in pipelines is presented in Figure 18.3. This is an identical plot to that in Figure 18.2 and covers exactly the same range of conveying conditions, in terms of both air and material flow rates and hence solids loading ratios. The pressure drop in this case is for an individual bend in the pipeline and hence is in mbar per bend.

The data presented in Figure 18.3 relates to 90° radiused bends in a 53 mm bore pipeline. This is also data that was initially derived from conveying trials with cement and barytes, but has since been found to be reasonably close to that for many other mater- ials. From an extensive programme of conveying trials with bends of different bend

diameter, D, to pipe bore, d, ratios, and reported in section 14.5.2, it was found that pres- sure drop varied little over a very wide range of D/d ratios.

It has been found that the pressure drop in blind tee bends, however, is significantly higher. An appropriate allowance, therefore, should be made if very short radius bends, blind tees or similar pocketed bends are to be fitted into a pipeline.

For dilute phase conveying a relatively high conveying air velocity must be maintained to ensure that the material does not drop out of suspension and block the pipeline. This is typically in the region of 10–12 m/s for a very fine powder, to 14–16 m/s for a fine granular material, and beyond for larger particles and higher density materials. For dense phase conveying, air velocities can be down to 3 m/s, and lower in certain circumstances.

It is generally recommended that, for design purposes, the pick-up, or conveying line inlet air velocity at the material feed point, should be about 20 per cent greater than the minimum conveying air velocity, as discussed above with Equation (18.7). This should provide sufficient margin to allow for surges in material flow, air mover char- acteristics, and other contingencies. An unnecessarily high conveying air velocity should not be employed as this will have an adverse effect on system performance, in terms of air pressure needed, and hence power requirements.

For guidance purposes an approximate value of the pick-up or conveying line inlet air velocity to be employed for pneumatic conveying is given in Figure 18.4 and so this incorporates the 20 per cent margin. For convenience, materials here are classified as being either ‘floury’ or ‘sandy’. Floury materials are those that are very fine and have good air retention properties and will convey in dense phase in a moving bed type of flow. Sandy materials are typically fine granular materials that have neither air retention nor permeability and so will only convey in dilute phase suspension flow in a conventional pneumatic conveying system. These curves simply represent ‘average’ materials for which Figures 18.2 and 18.3 also apply.