A large number of types of drive are offered for the motor types previously described. Some types of drive, especially electro-mechanical controllers ,are now considered to be outdated technology, but are included for com­ pleteness (see Figure 7.1). When a motor and a drive are combined, this becomes a power drive system (PDS). The power ranges for different technologies of electrical variable speed drives (VSDs) are shown in Figure 7.2, with a summary of their characteristics and additional details in Appendix A2.

Whilst it is possible to vary the slip of a conventional cage induction motor by reducing the supply voltage, this introduces unacceptable additional losses manifested as heat in the rotor. Therefore this method is only practical for wound rotor motors where this energy can be dissipated externally.

The preferred practice for electrical speed variation is by changing supply frequency with a variable frequency drive (VFD). The most common form of VFD system is the voltage source pulse width modulation (PWM) frequency converter (often incorrectly referred to as an inverter) applied to a cage induction motor.

Many other designs have been developed. However, few are still offered except for specialised applications.

The frequency converter produces a variable frequency, variable voltage, output waveform. In its simplest form the converter develops a 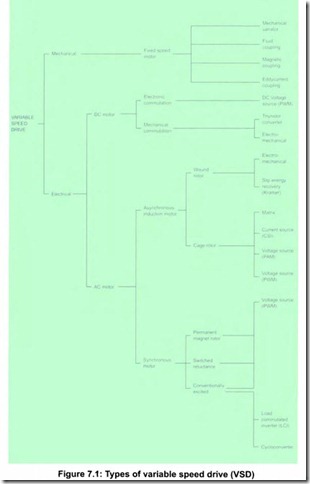 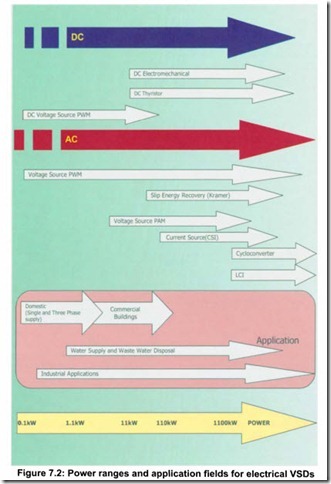 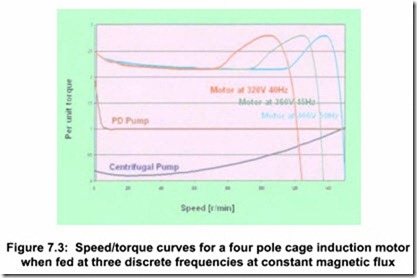 In theory a motor can be driven at any speed between zero and its design (base) speed by maintaining a constant flux. If a higher speed is required, this may be accommodated, providing the motor is appropriately designed. However, as the inverter output voltage will be limited, the motor flux and consequently the available torque will be reduced.

Figure 7.4 shows the design of most frequency converter drive systems. The three-phase AC voltage is initially rectified to a direct current (DC), then smoothed and finally, the DC/AC inverter converts the DC voltage to the variable voltage and variable frequency output applied to the motor. Further details of drive design are described in Appendix A2.1 and A2.2 The pulsed output voltage is applied to the motor and the resulting current, modified by the significant motor inductance, consists mainly of the fundamental sinewave at the required operating frequency with a superimposed low magnitude ripple component based on the switching frequency. Both voltage and current over one cycle are illustrated in simplified form with deliberately reduced switching frequency in Figure 7.5. The voltage and current waveforms are not in phase due to the effects of the motor power factor. 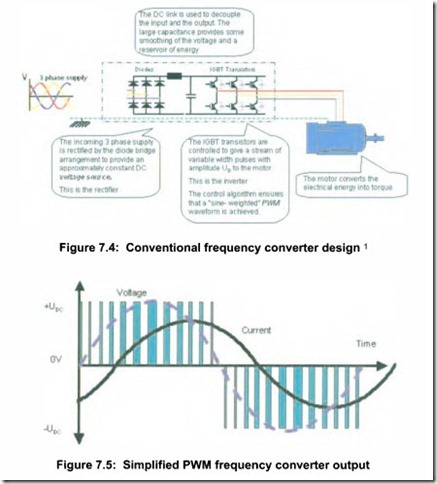