SELECTION AND PERFORMANCE OF CYLINDERS

The choice of a cylinder appropriate for a particular operation is determined in the main by the required force to be applied, the available air pressure and the speed of operation.

The theoretical force generated by a cylinder is readily calculated by taking the product of the available pressure and the effective area. The extension force is based on the full piston area and the retracting force on the annular area, ie omitting the area of the piston rod. In performing practical calculations, one should allow for the friction caused by the sealing forces on the piston and rod. It is recommended that the efficiency, allowing for friction, should be 75% or less for the smaller sizes of cyIinder and 65% for cylinders larger than 100 mm diameter. For dynamic applications, where the load has to be accelerated, a further allowance has to be made.

Spring return (single-acting) cylinders require that the air pressure is sufficient to overcome the force of the spring as well as friction. The spring is usually pre-loaded, so that when the cylinder is retracted with the spring fully extended, it still applies a force which has to be overcome by the air pressure.

Most manufacturers of cylinders supply performance data as part of the specification, either in their literature or on a computer-readable disc.

Some applications require a long-stroke, lightly loaded cylinder, for example the closing of sliding doors. The cylinder area as calculated theoretically may result in an impractically slender design, so a larger cyIinder has to be chosen. The consequence of this is operation with a low air pressure and consequently a very jerky movement. Ways of controlling this by valves is discussed in the chapter on Control Valves, but it can also be done hydraulically (see below).

The strength of a cylinder can be calculated from the same formula as for air receivers.

Material stress is given by:

where t is the wall thickness and D is the cylinder bore.

Commercially available cylinders are designed with a generous safety factor. Cylinders of conventional design do not have to meet the criteria for pressure vessels as discussed in the chapter on Air Receivers

It is more likely, when designing a cylinder, that the critical element is the piston rod. When stressed in tension, the material stress is given by:

where F is the tensile load and A is the cross-sectional area of the rod.

If the cylinder is used in dynamic applications, a generous factor of safety should be applied. A factor of 5 or 6 on ultimate tensile strength should be used.

The attachment of the rod to the piston and the sizing of the pin or shackle should also be checked in tension or shear.

When the cylinder is used as a strut at maximum extension, particularly with a long stroke length, the piston rod should be checked in buckling. The relationship is: 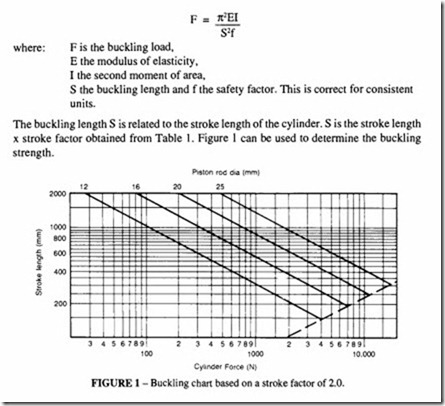 where D is the outside diameter of the rod.

As before the safety factor should have a minimum value of 5.

If the cylinder rod carries a bending load caused by side forces on the rod end, this must also be checked. Manufacturers can supply strength data for this purpose.

Air cylinders are inherently fast acting in the absence of throttling or inertia loading. If loads are light, the piston will continue to accelerate rapidly until brought to a stop at the end of the stroke. The travel can be arrested either by reaching the end of the cylinder or by a mechanical stop built into the operated mechanism.

When the cylinder itself forms the stop, the kinetic energy of the piston and rod is dissipated in the form of a shock load on the cylinder end cover, which may over-stress the end attachments or tie rods. This can be avoided by incorporating some means of decelerating the piston in a uniform manner as it approaches the end of its stroke; this is known as cushioning. A simple form of cushioning is an elastomer (customarily polyurethane) washer inserted between end cap and piston. Integral cushioning can be done pneumatically via a controlled bleed, thus providing an adjustable damping or braking effect over the last few miliimetres of travel. The piston is brought to rest gradually and the kinetic energy is dissipated in heat. Cylinders without cushioning should only be used if the stroke limitation is external.

Cushions can be fitted at one or both ends of the cylinder, and most manufacturers can supply them as an option. The cushion chamber may be incorporated in the end covers or in the form of a cushion coliar. The cushion boss or nose of the piston is usualiy tapered to provide smooth entry, but produces a plunger-type seal once it has fully entered the cushion chamber, trapping the air volume in the chamber which is then compressed by further motion. The rate of bleed and thus the cushioning effect is adjustable by means of a needle valve (see the chapter on Construction of Pneumatic Cylinders).

Detail design varies with manufacturer. Originally cushions were of a simple plunger type with both the cushion chamber bore and the piston nose of metal and this arrangement is widely used. Metal-plastic combinations may be preferred as being Jess affected by corrosion or dirt. Elastomeric seals may also be used in place of plunger seals.

Another type is based on a spring-loaded seal or an arrangement of face seals which forms its own cushion chamber once the seal is brought into contact with the seating surface at the end of the cylinder. This eliminates the need for a separate cushion chamber but requires a needle valve in both the blind end of the cylinder and the piston rod to bleed off the trapped air. See Figure 2.

The weakest point of all cushioning systems is usually the needle valve or bleed control, which can be affected by dirt or corrosion with a resulting change to the cushioning action.

A cushioned cylinder also requires some modification to the porting. On a double acting cylinder provision must be made to supply air directly to the piston area and not 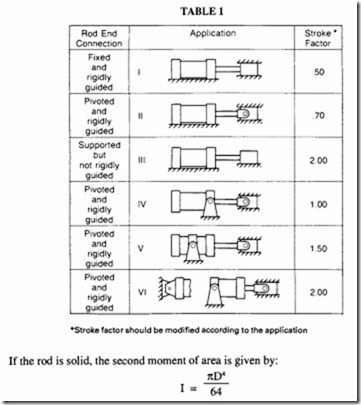 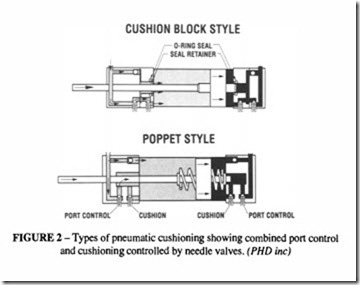 through the cushion chamber, otherwise the initial thrust available would be too low; this is a matter of suitable geometry.

With seal-type cushions, the flexibility ofthe seal can be such that it may collapse when air pressure is applied from the reverse side, allowing flow to the full piston area. Flow to the full area may also be encouraged by distribution channels in the end cover or piston face.

Cushioned cylinders are most suitable for low to moderate speeds, At speeds above 500 mm/s, they are relatively ineffective, the initial shock as the piston reaches the cushion area being too high unless a long cushion is used with progressive entry. Many automation applications such as machining operations and pick-and-place units require faster move­ ments up to 1 rn/s or greater. In these cases it may be necessary to arrange for some form of external cushioning, either by use of a buffer cylinder or some form of speed control which provides retardation over a suitable proportion of the stroke. Hydraulic cushions are often used for this purpose.

Two further limitations of integral cushioning are- (a) they are effective only ifthe full stroke of the piston is used and (b) they are relatively ineffective on pre-exhausted cylinders or those with quick exhaust valves.

In the former, the piston never enters the cushion area, being brought to rest by external stops. The use of cylinders with standard stroke lengths makes it unlikely that the exact length will be suitable for any particular operation.

In the latter, there is only a small amount of air trapped in the cushion and so the cushioning effect is correspondingly small.

One solution to end of stroke cushioning is the use of an hydraulic shock absorber, which can be mounted directly on the cylinder or on the load. One example is shown in Figure 3, mounted on a rodless cyIinder. These units are rated by the energy to be absorbed (obtained from the final velocity and the weight being moved) and the cycles per minute. Since shock 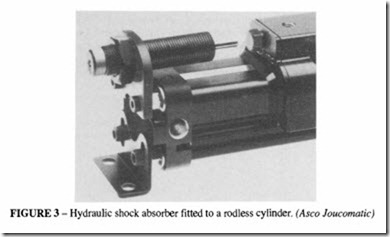 Oil is metered from one side of the piston to the other through a transfer tube. (PHD inc) absorbers convert the kinetic energy into heat, it is important not to exceed the maximum permissible cycles per minute for the given energy absorption. Up to 60 cycles per minute is possible for the smaller sizes and up to 5 m/s maximum velocity. Two types are available: automatic adjustment to give optimum absorption performance and user adjustable.

To control the velocity throughout the full stroke of the pneumatic cylinder, it is necessary to have an hydraulic cylinder working in parallel with it. This can be done by mounting the hydraulic cylinder on the back of the pneumatic one (Figure 4) or coupled to it by a common piston rod (Figure 5). In Figure 5, the reservoir is optional and should be fitted in rapid cycling applications. The whole assembly can occupy a considerable amount of space and should only be resorted to if other options fail. With this type of speed control, velocities from about 100 mm/s virtually down to 0 mm/s can be controlled.

The installation of standard pneumatic cylinders follows a similar procedure to that of hydraulic cylinders and depends on the mounting style chosen. This can be decided while the layout is being arranged.

With special cylinders such as rodless, the machine can be designed to take advantage of the special features of the cylinders and the manufacturer’s instructions should be followed.

Before fitting and operating the equipment, it is advisable to arrange a flexible air line complete with a blow gun for test purposes. By this means it is possible to see that the installation is correct and the cylinders can move freely.

It is important that where cylinders are operating guided slides, linkages and levers the axis of normal cylinder movement follows that of associated guided components in all planes. The cylinder axis can be lined up by the use of dial gauges located on the outside of the cylinder.

When the cylinder has been lined up it should be possible manually to move the load between the stroke extremities to make sure that the slides move freely. If the mechanical arrangement is such that manual operation is not possible due to the loading, the blow gun can be used at appropriate ports to actuate movement. Only when the movement is smooth and steady will the alignment be satisfactory. This test is not conclusive of free movement under full load, because it takes no account of deflections caused by reactive forces on the cylinder supports, but it should be done as a first stage, to be followed by a final load check.

For trunnion mountings, it is necessary to ensure that the cylinders are free to oscillate on their mountings and the cyIinder pipe connections must be clear to flex naturally under normal oscillation.

Finally all trunnions and bearing slides must be lubricated following the manufacturer’s instructions and a test of the complete system carried out.