Boyle’s law- which states that the volume (V) of a gas, at constant temperature varies inversely with the pressure (P).

Charles’s law- which states that the volume of a gas, at constant pressure, varies directly with the absolute temperature (T).

Amagat’s law- which states that the volume of a mixture of gases is equal to the partial volumes which the constituent gases would occupy if each existed alone at the total pressure and temperature of the mixture.

Poisson’s law – which states that for a process without any heat exchange with the surroundings, the relationship between pressure and volume follows the mathematical relationship: 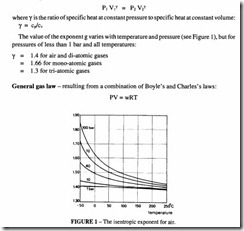 There are four theoretical ways of compressing air as shown in Figure 2. Of these only isothermal and isentropic need be considered as practical cycles for air compression. There is in addition a fifth cycle, polytropic, which is commonly used as a basis for performance estimation; it is intermediate between the isothermal and the isentropic curves. This takes into account the practical observation that real compression can take place neither at constant temperature nor without heat exchange to the surroundings.lt is characterised by the value of the polytropic exponent, n, an empirical value which is not capable of theoretical determination, but which has generally accepted values for various kinds of compressors. 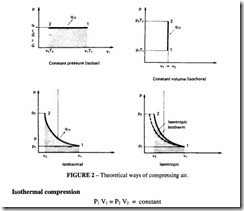 This is a hyperbola on the P-V diagram

The work done to compress and to deliver the gas is equal to the shaded area in Figure 2.

In this case, the total work also includes the amount of heat extracted to maintain the constant temperature.

No heat is extracted in this case and the governing equation is:

pyr =constant The work done in compression and delivery is:

Note that P1 and q1 refer to the inlet conditions of the compressor which is the usual way of quoting performance.

The equations appropriate to this type of compression are obtained by replacing yby n, the polytropic exponent. This is more for practical purposes than a concept which has theoretical justification. n is usually obtained empirically or by reference to the perform­ ance of similar compressors.

In continuous steady-state conditions it is impossible to attain a cycle approaching isothermal. Most operations are closer to adiabatic. Isothermal represents the theoretical aim and so the efficiency of a unit is often calculated on that basis.

It may sometimes happen in a very efficient compressor that this value exceeds unity. This occurs when exceptional measures have been taken to achieve internal cooling, as in some examples of oil injection in screw compressors.