In a radial pump, the cylinder block rotates on a stationary pintle and inside a circular reaction ring or rotor. As the block rotates, centrifugal force, charging pressure, or some form of mechanical action causes the pistons to follow the inner surface of the ring, which is offset from the centerline of the cylinder block. As the pistons recipro­cate in their bores, porting in the pintle permits them to take in fluid as they move out­ ward and discharge it at a higher pressure as they move in.

The size and number of pistons and the length of their stroke determines pump dis­ placement. In some models, moving the reaction ring to increase or decrease the pis­ton travel length or stroke can vary the displacement. 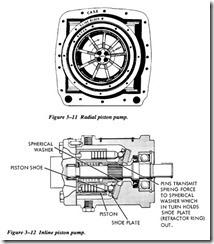 Figure 3-13 illustrates the operation of the radial piston pump. The pump consists of a stationary pintle that acts as a valve and a cylinder block, which revolves around the pin­ tle. The cylinder block also contains the pistons; a rotor that houses the reaction ring against which the piston heads press; and a slide block that is used to control the length of piston stroke. The slide block does not revolve, but houses and supports the rotor, which does revolve because of the friction set up by the sliding action between the pis­ ton heads and the reaction ring. The cylinder block is attached to the drive shaft.

In the illustrations, the rotor is shown in the center, the extreme right, or the extreme left as related to the cylinder block. The amount of adjustment in distance between the two centers determines the length of the piston stroke and the amount of fluid flow in and out of the cylinder. Thus, the adjustment determines the displacement of the pump. This adjustment may be controlled in different ways. Manual control by a handwheel is the simplest. The pump illustrated in Figure 3-13 is controlled in this way. For automatic control of delivery to accommodate varying volume requirements during the operating cycle, a hydraulically controlled cylinder may be used to position the slide block. A gear motor controlled by a push button or a limit switch is some­ times used for this purpose.

The cylinder blow in this pump is turned by the drive shaft. Pistons fitted to bores in the cylinder are connected through piston shoes and a retracting ring, so that the shoes bear against an angled swash plate. As the block turns (Figure 3-16), the piston shoes follow the swash plate, causing the pistons to reciprocate. The ports are arranged in 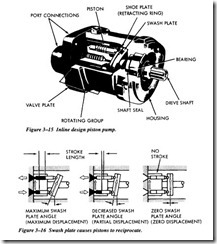 Operation of the inline compensator-controlled pump is shown schematically in Figure 3-17. The control consists of a compensator valve balanced between load pressure and the force of a spring, a piston controlled by the valve to move the yoke, and a yoke return 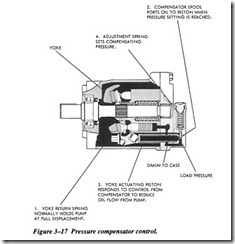 spring.With no outlet pressure, the yoke return spring moves the yoke to the full-delivery position .As pressure builds, it acts against the end of the valve spool. When the pressure is high enough to overcome the valve spring, the spool is displaced and oil enters the yoke piston. The piston is forced by the oil under pressure to decrease the pump displacement. If the pressure falls off, the spool automatically moves back, oil is discharged from the pis­ ton to the inside of the pump casing, and the spring returns the yoke to a greater angle.

The compensator adjusts the pump outlet to whatever displacement is required to develop and maintain the preset pressure. This prevents excess power loss by avoiding relief valve operation at full pump volume in holding and clamping applications.