Fluid behaviour is determined to some extent by its temperature. A later section discusses the relationship between pressure and tem­ perature in a gas.

A temperature scale is established by choosing two observable physical effects which are dependent upon temperature and assigning numerical values to them. The Fahrenheit and Celsius (previ­ously known as Centigrade) scales use the freezing and boiling points of water as the two reference points:

The SI unit of temperature is the Kelvin. This defines the lowest theoretical temperature (called absolute zero) as 0 K, and the triple point of water (0.01°C) as 273.16 K. It should be noted that tem­peratures in Kelvin do not use the degree (0 symbol. These appar­ently odd numerical values make a temperature change of 1 K the same as 1°C, and:

The Celsius scale is most widely used in industry, but the Kelvin scale is important in determining the changes in gas pressure or volume with temperature.

There are four basic ways of measuring temperature based on temperature-dependent physical properties.

Expansion of a substance with temperature can be used to produce a change in volume, length or pressure. This is probably the most common type of temperature measurement in the form of mercury or alcohol-in-glass thermometers. A variation is the bimetallic strip shown in Figure 1.21. where two dissimilar metals have different coefficients of expansion which cause the strip to

bend according to the temperature. This technique is the basis of most on/off thermostats used for temperature control or alarm annunciation. A bimetallic spiral can be used to construct an indicating thermometer.

Electrical resistance changes with temperature. A platinum wire with resistance 100 ohms at ooc will have a resistance of 138.5 ohms at 1OOOC. Temperature sensors based on this principle are known as RTDs (for resistance temperature detector) or PT100 sensors (from PT, for platinum, and 100 for 100 ohms at 0°C). Semiconductor devices called thermistors have more dramatic changes, the characteristics of a typical device being shown in Figure 1.22. The response, however, is non-linear which makes thermistors more suitable for alarm/control application than tem­ perature indication. 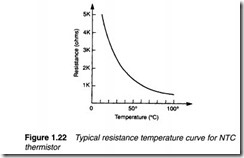 Thermocouples, the principle of which is shown in Figure 1.23, use the small difference in contact potentials between different metals to give a voltage which depends on the temperature differ­ence between the measurement and reference points. Although widely used in process control, the technique is rarely encountered in pneumatic and hydraulic systems.

The final method, called pyrometry, uses the change in radiated energy with temperature. As this has a minimum temperature mea­ surement of about 400°C, it is totally unsuitable for the systems we shall be discussing.