Conveying characteristics for another group of four materials are presented in Figure  These were all conveyed from a high pressure top discharge blow tank and through a 70-m long pipeline of 53 mm bore that is shown in Figure 12.22.

The conveying characteristics for bentonite are shown in Figure 12.21a. Bentonite is another of the drilling mud powders. The material has a bulk density of about 760 kg/m3 and a particle density of 2300 kg/m3. The mean particle size of the ben- tonite was 24 j.Lm and so was clearly capable of low velocity dense phase conveying. From Figure 12.21a it can be seen that it could be conveyed at solids loading ratios up to 140 in this 70 m long pipeline, and with conveying line inlet air velocities down to 3 m/s. It will also be seen that the form of the conveying characteristics are very similar to those for fine fly ash, with steeply sloping lines of constant pressure drop.

Similar data for fluorspar is presented in Figure 12.21b. Material flow rates and solids loading ratios here are very much lower and this is partly due to the fact that the min- imum conveying air velocity was about 7 m/s. The material, therefore is clearly conveyed in dense phase, but has limited capability. The mean particle size of the fluorspar was about 66 j.Lm and so is in the transitional range of dense phase capability. With a lower particle size the material would probably have full dense phase con- veying capability, like the bentonite, although the material flow rate would probably be much lower. The bulk density of the fluorspar was about 1580 kg/m3 and the particle density 3700 kg/m3.

The conveying characteristics for coal in Figure 12.21c are quite definitely dilute phase conveying. Although solids loading ratio values of up to 30 have been achieved this is 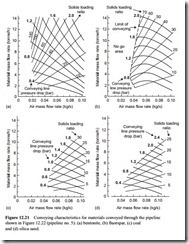 only because high pressure air has been used and the coal contained a high proportion of fine material. The fines have helped to lower the minimum conveying air velocity for the material to about 12 m/s, and as material flow rates for coal are quite high in relation to other materials, as will be seen from Figure 12.4, this has resulted in a high value of solids loading ratio for dilute phase conveying. 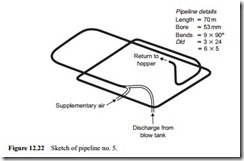 Data for sand is presented in Figure 12.21d. The sand had a mean particle size of 70 j.Lm, with a fairly narrow size distribution, and so there was no possibility of the material being conveyed in dense phase in a conventional conveying system, even with high pressure air available. The minimum conveying air velocity was similar to that for the coal and so this is quite clearly dilute phase suspension flow. The maximum value of solids loading ratio, however, was only 25, and this was only achieved with a conveying line pressure drop of 2.4 bar. The silica sand had a bulk density of about 1250 kg/m3 and a particle density of 2630 kg/m3.