In order to determine the influence of vertical sections in a pipeline it is generally necessary to use pressure tappings along the length of the section to be considered. By this means, data can be obtained for vertical sections in isolation from the rest of the pipeline. In horizontal pipelines pressure tappings are not required since there is no change in orientation. The data obtained, however, will be in a different form, but if tests are carried out over a range of conveying conditions, the results can be presented in a similar way to those of the conveying characteristics for the pipeline.

Data obtained from a PhD programme [1] on vertical pneumatic conveying, super- vised by the author, is included here to illustrate the nature of the relationships. A sketch of the pipeline specifically built for the test work, together with typical pressure gradient results are presented in Figure 11.12 [2]. Two pipelines were built, one of 53 and another 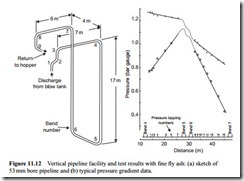 Two typical sets of pressure measurement data for the vertically down and vertically up sections of pipeline are presented in Figure 11.12b. This shows the location of the pressure tappings and their proximity to the various bends in the pipeline. The data relates to the pneumatic conveying of a fine grade of pulverized fuel ash, and many other materials were tested [2].

Results for the vertically downward conveying of a fine grade of pulverized fuel ash through the 53 mm bore pipeline are presented in Figure 11.13a. The same axes have been employed, as for the conveying characteristics, but lines of constant pressure gradient in mbar/m have been drawn from the experimental data. Solids loading ratio values of well over 100 were achieved for the flow of material. 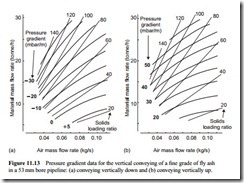 loss, but at higher solids loading ratios there will be an increase in pressure along the length of the pipeline. With a line pressure gradient of -25 mbar/m this would amount to a gain in pressure of about 1.0 bar for a 40 m length of vertical pipeline when conveying downwards.

If a pipeline having a significant proportion of the routing vertically downwards has to be designed, data such as that in Figure 11.13a is essential. This would be the case in situations where materials have to be conveyed down mine shafts. With a large vertical fall a very high pressure could result if the material was conveyed at a high value of solid loading ratio. It is possible that the pressure generated in this way could be used to con- vey the material to mine workings some distance from the bottom of the shaft. Such a system would have to be carefully designed, with due consideration to conveying air velocities in horizontal sections following vertical falls, but it is possible that it could operate with a low air supply pressure and require little power [3]. 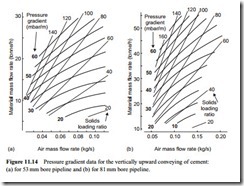 Lines of constant conveying line pressure gradient will ultimately reach the horizontal axis and so the slope must, at some point, reverse. In the area appropriate to pneumatic conveying, however, it would appear that a significant increase in material flow rate can be obtained by increasing the air flow rate. This is possibly a feature of straight pipeline lengths as it applies to both vertically up and vertically down lines. An increase in air flow rate at a constant line pressure gradient will result in a correspond- ing increase in power requirements, but it does mean that much of the extra power is being used to convey additional material. This point is considered further in relation to both horizontal pipeline and bends that follows.

In work carried out to determine scaling parameters for horizontal conveying distance, tests were carried out on pipelines of various lengths but with each having the same number of bends. From an analysis of the results obtained the influence of the bends was isolated. The results for barytes in a 53 mm bore pipeline are presented in Figure 11.15. This is a similar plot to that for the vertical lines in Figures 11.13 and 11.14. It will be noticed that, although these pressure gradient values are much lower than those presented for the vertically up lines, the trend of the curves is very similar. Despite the fact that barytes has a particle density of about 4200 kg/m3, solids loading ratios in excess of 100 were obtained once again. In terms of dense phase conveying capability it is the air retention property that is the dominating parameter.

Figure 11.15 shows once again that for straight pipeline sections there will be an increase in material flow rate with increase in air flow rate, in the area of the conveying

In work carried out to determine scaling parameters for pipeline bends, tests were carried out on two lines of approximately the same length but having a different number of bends. From an analysis of the results obtained from these two pipelines, the influence of the bends was determined. By using the results of this analysis, it is possible to separate the effects of bends from the straight horizontal conveying, without having to use pressure tappings.

A plot similar to those presented in Figures 11.13 to 15 is given in Figure 11.16 for the pipeline bends. The data in this case is presented in terms of a pressure loss in mbar/bend, and relates to bends having a bend diameter to pipe bore ratio of about 24:1. It can be seen from Figure 11.16 why the conveying characteristics for a pipeline sys- tem are so different from those of the straight sections of pipeline.

In terms of pipeline conveying performance, therefore, bends can have a very significant effect. Losses associated with bends are expressed as either a pressure drop or an equivalent length of straight horizontal pipeline. The number of bends, their geometry and their location in the pipeline are all important. It is also possible that the type of conveyed material has a significant effect, as well as conveying parameters. These issues are considered further in Chapter 14.

Part of the problem lies in the complexity of the flow in the region of a bend. The conveyed particles approaching a bend, if fully accelerated, will have a velocity of about 80 per cent of that of the air. The velocity, of course, will depend upon the particle shape, size and density, and the pipeline orientation. At outlet from a bend the velocity of the particles will be reduced and so they will have to be re-accelerated back to their terminal velocity in the straight length of pipeline following the bend. 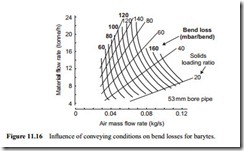 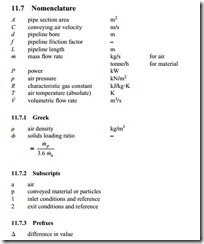