It could be rightly argued that a calculation of this kind takes no account of the pressure energy content of the compressed air, but only of its kinetic energy or energy of transport. The former can be reclaimed only if the output machine is designed to work expansively. Unfortunately, from the point of view of the energy conservationist, few devices do work this way or are able to use much of the energy of compression; most tools and other types of machine work almost as if they were hydraulic machines. The air is discharged at practically the same pressure as it entered. Some modern tools are designed to allow a degree of internal expansion, but in most such cases the reason is not so much economy as the need to reduce the noise caused by a sudden expansion of the air.

There are two reasons why pneumatic machines are designed on an hydraulic basis. The first and main reason is that they would have to be much larger for the same power output; the greater the need to maximize the power/weight ratio, the less is the design expansion ratio. Another reason is that if the air were to expand fully its temperature would fall and the moisture content in it would freeze, with the likelihood of the flow passages becoming blocked; this is already a problem for many tools in the region of the exhaust port. 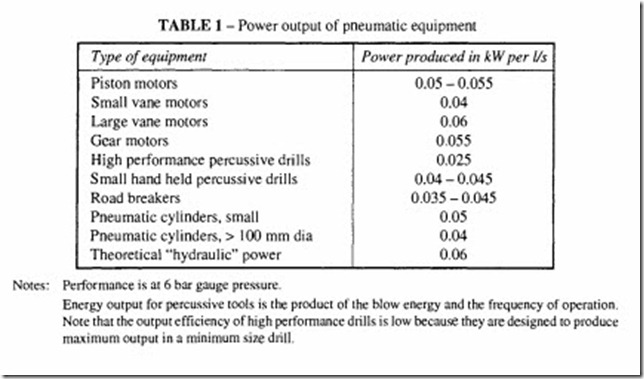 Energy output for percussive tools is the product of the blow energy and the frequency of operation. Note that the output efficiency of high performance drills is low because they are designed to produce maximum output in a minimum size drill.

To demonstrate the energy needed by some typical machines, Table 1 has been prepared from published values of power output.

It is instructive to calculate the overall energy usage of a typical compressed air system.

Take as an example a rotary motor, capable of producing 0.05 kW per 1/s of air FAD at 6 bar pressure. As determined above, to produce I1/s requires 0.26 kW at the compressor. The overall efficiency is therefore 0.05/0.26 = 0.19 = 19%. This calculation demonstrates the basic feature of compressed air- its comparative inefficiency. It shows that 81% of the power of the prime mover is converted into an unusable form of energy, ie heat, and to a lesser extent into friction and noise; it also indicates the importance of ensuring that the air is not wasted.

If one is designing a compressed air system, it is worthwhile investigating the possibility of using some part of the 81% for other purposes such as space heating, for hot washing water or, if the factory can use it, for processing. Paint drying, paper drying and baking ovens are possible applications that could use some of the waste heat. It is quite possible to produce hot water at a temperature of 90°C. This subject is discussed in detail later. It has been calculated that I0% of all electrical power used in industry produces compressed air; the opportunity of using 80% of that for heating presents a considerable challenge to the designer.

The subject of Compressor Control has been dealt with previously. Maximum effi­ ciency in the control system will ensure that power is not wasted. A compressor that runs partially or totally unloaded for any appreciable time may consume up to 75% of its full load power because of the minimum power needs of the compressor, the lower power factor and reduced motor efficiency. It is worthwhile incorporating an automatic control system that stops the compressor when it no longer needs to provide air. For installations where there are wide fluctuations in demand, the use of several smaller compressors connected to a multi-set control enables the shutdown of one or more units when demand for air is low, significantly reducing the power consumption.

Comparison with other energy media

It might be asked why, if compressed air is so inefficient, it is such a widespread form of energy. There are several reasons for this. One of the main uses of compressed air is the operation of pneumatic tools and power cylinders for factory automation. Percussive tools are particularly suitable for being driven by air; and despite the many attempts to develop equivalent tools working on hydraulic power or electricity, in the main they have not been successful.

By their nature, percussive tools have a rapidly varying demand for air. They operate at up to 3000 cycles per minute; during each cycle the demand varies from zero to maximum, which the compressibility of the medium can accommodate. An hydraulic tool, working with an incompressible medium has artificially to create compressibility in the supply line by including gas accumulators in the circuit close to the tool.

Pneumatic tools are cheaper, lighter and easier to handle than electric or hydraulic ones, and although they may not make such good use of the input power, ergonomic factors

outweigh considerations of cost. Provided that reasonable precautions are taken, com­ pressed air is a clean and safe medium. Even when considering cost, the simplicity of construction of pneumatic tools, their tolerance to misuse and lack of maintenance often means that a pneumatic system may cost no more overall than its competitors.

Another feature of compressed air as a power medium is that it does not matter if the output device stalls. A pneumatic motor has a stall torque as large as or larger than its running torque, and can sustain that with no chance of damage. An electric motor would soon burn out under these conditions, and an hydraulic motor would blow off at its pressure relief valve.

Air does not make a mess on the floor when it escapes. A leaking hydraulic system is soon noticed and remedied but a leak of air will continue to be ignored. Anyone who has visited a factory after the shift has finished cannot fail to have noticed the hiss of a leaking air main. The waste that this represents can be easily and cheaply remedied.