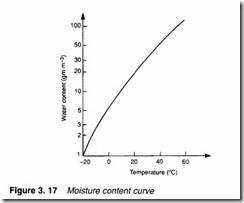 If a given volume of air contains the maximum quantity of water vapour possible at the air temperature, the air is said to be saturat­ed (and we would perceive it as sticky because sweat could not evaporate from the surface of the skin). From Figure 3.17, air con­taining 50 grams of water vapour per cubic metre at 40°C is satu­ rated.

Moisture content of unsaturated air is referred to by relative humidity, which is defined as:

Air containing 5 grams of water vapour per cubic metre of air at 20°C has, from Figure 3.17, a relative humidity of 30%.

Relative humidity is dependent on both temperature and pressure of the air. Suppose air at 30°C contains 20 grams of water vapour. From Figure 3.17 this corresponds to 67% humidity. If the air is allowed to cool to 20°C it can only hold 17 grams of water vapour and is now saturated (100% relative humidity). The excess 3 grams condenses out as liquid water. If the air is cooled further to 10°C, a further 8 grams condenses out.

The temperature at which air becomes saturated is referred to as the ‘dew point’. Air with 17.3 grams of water vapour per cubic metre has, for example, a dew point of 20°C.

It follows that relative humidity rises quickly with increasing pressure, and even low atmospheric relative humidity leads to satu­ rated air and condensation at the pressures used in pneumatic systems (8-10 bar). Water droplets resulting from this condensation can cause many problems. Rust will form on unprotected steel sur­faces, and the water may mix with oil (necessary for lubrication) to form a sticky white emulsion, which causes valves to jam and blocks the small piping used in pneumatic instrumentation systems. In extreme cases water traps can form in pipe loops.

When a compressed gas expands suddenly there is a fall of tem­ perature (predicted by expression 1.19). If the compressed air has a high water content, a rapid expansion at exhaust ports can be accompanied by the formation of ice as the water condenses out and freezes.

Air in a pneumatic system must be clean and dry to reduce wear and extend maintenance periods. Atmospheric air contains many harmful impurities (smoke, dust, water vapour) and needs treatment before it can be used.

In general, this treatment falls into three distinct stages, shown in Figure 3.18. First, inlet filtering removes particles which can damage the air compressor. Next, there is the need to dry the air to reduce humidity and lower the dew point. This is normally per­ formed between the compressor and the receiver and is termed primary air treatment.

The final treatment is performed local to the duties to be per­ formed, and consists of further steps to remove moisture and dirt and the introduction of a fine oil mist to aid lubrication. Not sur­prisingly this is generally termed secondary air treatment.

Inlet filters are used to remove dirt and smoke particles before they can cause damage to the air compressor, and are classified as dry filters with replaceable cartridges (similar to those found in motor car air filters) or wet filters where the incoming air is bubbled through an oil bath then passed through a wire mesh filter. Dirt par­ticles became attached to oil droplets during the bubbling process and are consequently removed by the wire mesh.

Both types of filter require regular servicing: replacement of the cartridge element for the dry type; cleaning for the wet type. If a filter is to be cleaned, it is essential the correct detergent is used. Use of petrol or similar petrochemicals can tum an air compressor into an effective diesel engine – with severe consequences.

Filters are classified according to size of particles they will stop.

Particle size is measured in SI units of micrometres (the older metric term microns is still common) one micrometre (1 J.tm) being I0-6 metre or 0.001 millimetre. Dust particles are generally larger than 10 Jlm, whereas smoke and oil particles are around 1 J.tm. A filter can have a nominal rating (where it will block 98% of parti­ cles of the specified size) or an absolute rating (where it blocks 100% of particles of the specified size).

Microfilters with removable cartridges passing air from the centre to the outside of the cartridge case will remove 99.9% of par­ ticles down to 0.01 J.tm, the limit of normal filtration. Coarse filters, constructed out of wire mesh and called strainers, are often used as inlet filters. These are usually specified in terms of the mesh size which approximates to particle size in micrometres as follows:

In bulk air systems all that may be required is a simple after­ cooler similar to the intercoolers described earlier, followed by a separator unit where the condensed water collects and can be drained off.

Figure 3.19a shows a typical water trap and separator. Air flow through the unit undergoes a sudden reversal of direction and a deflector cone swirls the air (Figure 3.19b). Both of these cause heavier water particles to be flung out to the walls of the separator and to collect in the trap bottom from where they can be drained. Water traps are usually represented on circuit diagrams by the symbol of Figure 3.19c. 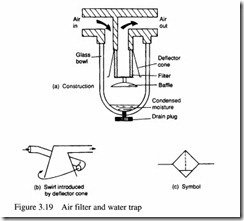 Dew point can be lowered further with a refrigerated dryer, the layout of which is illustrated in Figure 3.20. This chills the air to just above ooc condensing almost all the water out and collecting the condensate in the separator. Efficiency of the unit is improved with a second heat exchanger in which cold dry air leaving the dryer pre-chills incoming air. Air leaving the dryer has a dew point similar to the temperature in the main heat exchanger.

Refrigerated dryers give air with a dew point sufficiently low for most processes. Where absolutely dry air is needed, chemical dryers must be employed. Moisture can be removed chemically from air by two processes.

In a deliquescent dryer, the layout of which is shown in Figure , a chemical agent called a desiccant is used. This absorbs water vapour and slowly dissolves to form a liquid which collects at the bottom of the unit where it can be drained. The dessicant material is used up during this process and needs to be replaced at regular intervals. Often deliquescent dryers are referred to as absorbtion dryers. a term that should not be confused with the next type of dryer. 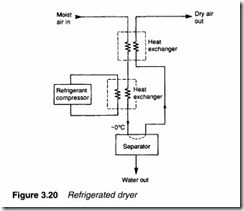 An adsorption dryer collects moisture on the sharp edges of a granular material such as silicon dioxide, or with materials which can exist in hydrated and de-hydrated states (the best known is copper sulphate but more efficient compounds are generally used). Figure 3.22 shows construction of a typical adsorption dryer. Moisture in the adsorption material can be released by heating, so 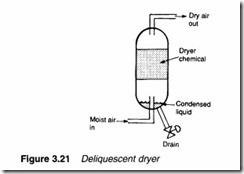 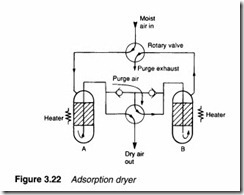 two columns are used. At any time, one column is drying the air while the other is being regenerated by heating and the passage of a low purge air stream. As shown, column A dries the air and column B is being regenerated. The rotary valves are operated auto­ matically at regular intervals by a time clock. For obvious reasons adsorption dryers are often referred to as regenerative dryers.

A carefully controlled amount of oil is often added to air immedi­ately prior to use to lubricate moving parts (process control pneu­matics are the exception as they usually require dry unlubricated air). This oil is introduced as a fine mist, but can only be added to thoroughly clean and dry air or a troublesome sticky emulsion forms. It is also difficult to keep the oil mist-laden air in a pre­dictable state in an air receiver, so oil addition is generally per­ formed as part of the secondary air treatment.

The construction of a typical lubricator is shown with its symbol in Figure 3.23. The operation is similar to the principle of the petrol air mixing in a motor car carburettor As air enters the lubricator

its velocity is increased by a venturi ring causing a local reduction in pressure in the upper chamber. The pressure differen­tial between lower and upper chambers causes oil to be drawn up a 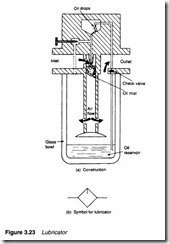 riser tube, emerging as a spray to mix with the air. The needle valve adjusts the pressure differential across the oil jet and hence the oil flow rate.

The air-oil mixture is forced to swirl as it leaves the central cylinder causing excessively large oil particles to be flung out of the air stream.

One thought on “Air treatment:Stages of air treatment,Filters,Air dryers and Lubricators.”