Pneumatic and hydraulic systems require control valves to direct and regulate the flow of fluid from compressor or pump to the various load devices. Although there are significant practical differ­ences between pneumatic and hydraulic devices (mainly arising from differences in operating pressures and types of seals needed for gas or liquid) the operating principles and descriptions are very similar.

Most control valves, however, are only used to allow or block flow of fluid. Such valves are called finite position valves. An analogy between the two types of valve is the comparison between an electric light dimmer and a simple on/off switch. Connections to a valve are termed ‘ports’. A simple on/off valve therefore has two ports. Most control valves, however, have four ports shown in hydraulic and pneumatic forms in Figure 4.1.

In both the load is connected to ports labelled A, B and the pres­sure supply (from pump or compressor) to port P. In the hydraulic valve, fluid is returned to the tank from port T. In the pneumatic valve return air is vented from port R. 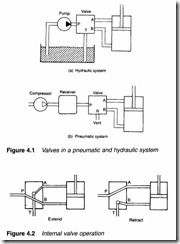 The numbers of ports and positions does not, however, com­pletely describe the valve. We must also describe its action. Figure shows one possible action for the 4/3 valve of Figure 4.3b. Extend and retract connections are similar, but in the off position ports P and T are connected-unloading the pump back to the tank without need of a separate loading valve, while leaving the ram locked in position. (This approach could, of course, only be used where the pump supplies one load). Other possible arrangements may block all four ports in the off position (to maintain pressure), or connect ports A, B and T (to leave the ram free in the off posi­tion). A complete valve description thus needs number of ports, number of positions and the control action.