Control components in a hydraulic system

After reading this chapter, the student will be able to:

• Learn about the various control components used in hydraulics

• Understand and explain the different methods of valve actuation

• Explain the purpose, design and operation of servo valves

• Understand the concept of hydraulic fuses

• Understand the function and purpose of shock absorbers in hydraulics

• Learn about the operation of different types of temperature and pressure switches.

One of the most important considerations in a hydraulic system is ‘control’. For any hydraulic system to function as required, a proper selection of control components is quite essential. Fluid power is primarily controlled with the help of control devices called valves. The selection of these control devices involves not only choosing the right type but also the size, actuating technique and its remote control capability.

In this chapter, we shall review in detail the working of various control devices in

hydraulic systems that are as listed below:

A valve is a control device used for adjusting or manipulating the flow rate of a liquid or gas in a pipeline. The valve essentially consists of a flow passage whose flow area can be varied. The external motion can originate either manually or from an actuator positioned pneumatically, electrically or hydraulically, in response to some external positioning signal. This combination of the valve and actuator is known as a control valve or an automatic control valve.

Basically there are three types of control valves:

2. Pressure control valves: Pressure control valves protect the system against overpressure conditions that may occur either on account of a gradual build up due to decrease in fluid demand or a sudden surge due to opening or closing of the valves. Pressure relief, pressure reducing, sequencing, unloading, brake and counterbalance valves control the gradual buildup of pressure in a hydraulic system. Pressure surges can produce instantaneous increases in pressure as much as four times the normal system pressure and that is the reason why pressure control devices are a must in any hydraulic circuit. Hydraulic devices such as shock absorbers are designed to smoothen out pressure surges and also to dampen hydraulic shock.

Since it is important to know the primary function and operation of the various types of control components, it is required to examine and study the functioning of each of these valves in detail.

As briefly discussed above, direction control valves are used to control the direction of flow in a hydraulic circuit. They are primarily designated by their number of possible positions, port connections or ways and the manner in which they are actuated or energized. For example, the number of porting connections is designated as ways or possible flow paths. A four-way valve would comprise of four ports P, T, A and B. A Three-position valve is indicated by three connected boxes, as shown. There are several mechanisms employed for actuation or shifting of the valve. They include hand lever, foot pedal, push button, mechanical, hydraulic pilot, air pilot, solenoid and spring. 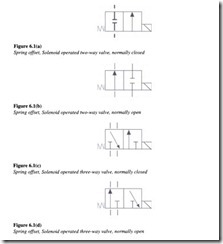 By direct acting, it is implied that some force is made to act directly on the spool, causing it to shift. A direct acting direction control valve can be actuated either manually or with the help of a solenoid.

In the example illustrated in Figure 6.2, upon energizing the solenoid, an electro­ magnetic force which is generated pulls the armature of the coil into the magnetic field. As a consequence of this action, the connected push pin moves the spool in the same direction, while compressing the return spring. The shift in the spool valve results in port P opening to port A and port B opening to port T or tank, thereby allowing the cylinder to extend. When the coil is de-energized, the return springs move the spool back to its center position. Manual overrides are provided with most solenoid actuated valves, allowing for

the spool to be operated by hand. This can be accomplished by depressing the pin in the push pin tube end located at each end of the valve.

In hydraulic systems requiring higher flow rates of 35 gpm and above, a greater force is required to shift the spool. This is not possible with the direct acting method and therefore a pilot-operated arrangement is used. Figure 6.3 illustrates the working of a pilot-operated direction control valve. These valves are operated by applying air pressure against a piston at either end of the valve spool. Referring Figure 6.3, the top valve is known as the pilot valve, while the bottom valve is the main valve that is to be actuated. In a typical pilot operated valve operation, the pilot valve is used to hydraulically actuate the main valve. The oil required by the pilot valve in order to accomplish this operation is directed either from an internal source or an external source. Oil is directed to one side of the main spool, when the pilot valve is energized. The resultant shift in the spool leads to the opening of the pressure port to the work port thereby directing the return fluid back to the tank. External piloting or in other words, sending fluid to the pilot valve from an external source is often resorted to. 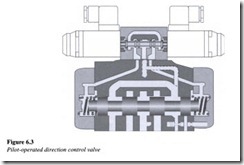 To understand the concept of Pilot-operated direction control valves even better, let us consider the following example shown in Figure 6.4 illustrating the cutaway section of a pilot-operated four-way valve.