For this case study a material has been chosen that has no natural dense phase convey- ing capability and so can only be conveyed in dilute phase suspension flow in a conven- tional pneumatic conveying system. The magnesium sulphate had a mean particle size of about 225 f.Lm and so de-aerated very rapidly. The bulk density of the material was about 1010 kg/m3 and the particle density 2350 kg/m3. As with dense phase conveying, the minimum conveying air velocity for a material is a critical design parameter, but unlike dense phase conveying there is no significant change in its value with solids loading ratio.

Data on the pneumatic conveying of magnesium sulphate was presented in Chapter 12. The material was conveyed through pipeline no. 6 (Figure 12.24) and the conveying characteristics were presented in Figure 12.23d. It was reported (Section 12.2.6.4) that the minimum conveying air velocity for the material was about 14 m/s. Tests were car- ried out with conveying line pressure drop values up to 1.8 bar and the maximum value of solids loading ratio that could be achieved was about 10.

To illustrate the scaling process for system design with regard to dilute phase conveying, the magnesium sulphate is used. Once again just a single point is selected for scaling but the entire conveying characteristics can be scaled if required.

A sketch of the test pipeline used for this case study is given in Figure 17.1. It is almost identical to pipeline no. 6 reported above but the bore of the pipeline was 105 mm instead of 81 mm.

The pipeline was 95 m long and almost entirely in the horizontal plane. The pipeline incorporated nine 90° bends and they all had a D/d ratio of 12:1. The pipeline was fed by a high pressure top discharge blow tank. Conveying characteristics for the magnesium sulphate conveyed through this pipeline are presented in Figure 17.2. 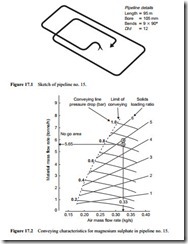 It is suggested that a design should be considered for the conveying of the magnesium sulphate over a horizontal distance of 300 m at a rate of 15 tonne/h and that a positive displacement blower having a 1 bar gauge delivery pressure capability should be used. It is proposed that the design should be based on a conveying line pressure drop of 0.85 bar. The pipeline routing has a total vertical lift of 25 m and incorporates seven 90° bends.

In dilute phase conveying the pipeline bends can play a very significant role and so data on the equivalent length of bends from Figure 14.16, and used in the previous case study, is also required here. It is reproduced in Figure 17.3 for reference. The minimum conveying air velocity for the magnesium sulphate in pipeline no. 15 was also 14 m/s. The conveying line inlet air velocity will be based on a velocity approximately 20 per cent higher than this as generally recommended.