TRANSMISSION OF FORCE THROUGH LIQUIDS

When a force is applied to the end of a column of confined liquid (Figure 2-7, view B), it is transmitted straight through to the other end. It is also equal and undiminished in every direction throughout the column-forward, backward, and sideways-so that the containing vessel is literally filled with the added pressure. 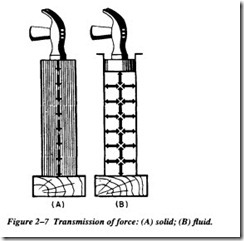 So far we have explained the effects of atmospheric pressure on liquids and how external forces are distributed through liquids. Let us now focus our attention on forces generated by the weight of liquids themselves. To do this, we must first discuss density, specific gravity, and Pascal’s law.

PRESSURE AND FORCE IN HYDRAULIC SYSTEMS


According to Pascal’s law, any force applied to a confined fluid is transmitted uni­ formly in all directions throughout the fluid regardless of the shape of the container. Consider the effect of this in the system shown in Figure 2-8.

In this case, the fluid column has a uniform cross-section, so the area of the output piston is the same as the area of the input piston, or 10 square inches. Therefore, the upward force on the output piston is 100 pounds and is equal to the force applied to the input piston. All that was accomplished in this system was to transmit the 100 pounds of force around the bend. However, this principle underlies practically all mechanical applications of hydraulics or fluid power. 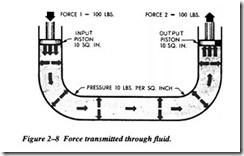 At this point, you should note that since Pascal’s law is independent of the shape of the container, it is not necessary that the tube connecting the two pistons have the same cross-sectional area as the pistons. A connection of any size, shape, or length will do, as long as an unobstructed passage is provided. Therefore, the system shown in Figure 2-9, with a relatively small, bent pipe connecting two cylinders, will act exactly the same as the system shown in Figure 2-8.

Unlike the preceding discussion, hydraulic systems can provide mechanical advan­ tage or a multiplication of input force. Figure 2-10 illustrates an example of an increase in output force. Assume that the area of the input piston is 2 square inches. With a resistant force on the output piston, a downward force of 20 pounds acting on the input piston will create a pressure of 20/2 or 10psi in the fluid. Although this force is much smaller than the force applied in Figures 2-8 and 2-9, the pressure is the same. This is because the force is applied to a smaller area.

This pressure of 10 psi acts on all parts of the fluid container, including the bottom of the output piston. The upward force on the output piston is 200 pounds (10 psi x pis­ ton area). In this case, the original force has been multiplied tenfold while using the same pressure in the fluid as before. In any system with these dimensions, the ratio of output force to input force is always 10 to 1, regardless of the applied force. For example, if the applied force of the input piston is 50 pounds, the pressure in the sys­ tem will be 25 psi. This will support a resistant force of 500 pounds on the output pis­ ton. The system works the same in reverse.

If we change the applied force and place a 200-pound force on the output piston (Figure 2-11), making it the input piston, the output force on the input piston will be one-tenth the input force, or 20 pounds. Therefore, if two pistons are used in a fluid power system, the force acting on each piston is directly proportional to its area, and the magnitude of each force is the product of the pressure and the area of each piston. 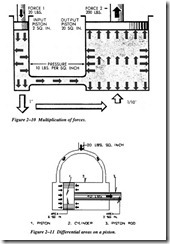 Figure 2-11 is a simple example of differential pressure. The figure illustrates a single piston with a surface area of 6 square inches, attached to a piston rod with an area of 2 square inches. Without any external force applied to the end of the piston rod, an equal force, 20 psig, applied to both sides of the piston, will cause the piston to move to the right. This motion is the result of differential forces. Even though the input force, 20 psig, is applied to both sides of the piston, the difference in area, 6 in2 on the left face,

In the system illustrated in Figure 2-8, assume that the resistant force on the output piston is 100 pounds. If a force slightly greater than 100 pounds is applied to the input piston, the pressure in the system will be slightly greater than 10 psi. This increase in pressure will overcome the resistant force on the output piston. If the input piston is forced downward 1 inch, the movement displaces 10 cubic inches of fluid. The fluid must go somewhere. Since the system is closed and the fluid is practically incom­pressible, the fluid will move the right side of the system. Because the output piston also has a cross-sectional area of 10 square inches, it will move upward 1 inch to accommodate the 10 cubic inches of fluid. You may generalize this by saying that if two pistons in a closed system have equal cross-sectional areas and one piston is pushed and moved, the other piston will move the same distance in the opposite direc­ tion. This is because a decrease in volume in one part of the system is balanced by an equal increase in volume in another part of the system.

This leads to the second basic rule for fluid power systems that contain two pistons: The distances the pistons move are inversely proportional to their areas. Or, more sim­ply, if one piston is smaller than the other, the smaller piston must move a greater dis­tance than the larger piston any time the pistons move.