The operating principles of all the pressure control valves revolve around these two basic design types.

The primary objective in any hydraulic circuit is to either control the flow rate or pressure. For accurate control of force in a hydraulic circuit, six different types of pressure control valves have been developed. These are given below along with their graphical representation (Figures 6.15 (a)-(f)). 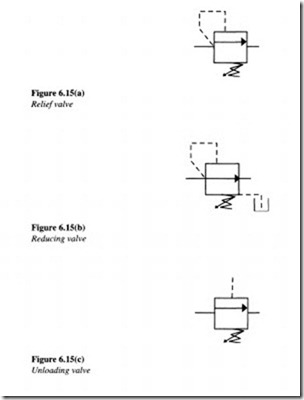 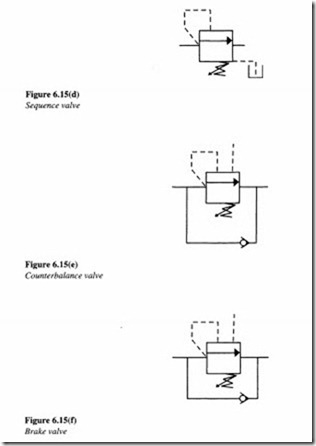 One may find the graphical symbols quite confusing since these valves resemble one another so closely that often only their location in a hydraulic circuit may actually help determine what type of pressure valve they are.

The most widely used type of pressure control valve is the pressure relief valve since it is found in practically every hydraulic system. It is a normally closed valve whose function is to limit the pressure to a specified maximum value by diverting the pump flow back to the tank. The primary port of a relief valve is connected to system pressure and the secondary port connected to the tank. When the poppet in the relief valve is actuated at a predetermined pressure, a connection is established between the primary and secondary ports resulting in the flow getting diverted to the tank. Figure 6.16, illustrates the operation of a simple direct acting relief valve. 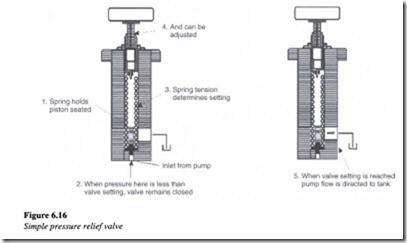 One important consideration to be taken note of is the practical difficulty in designing a relief valve spring strong enough to keep the poppet closed at high-flow and high­ pressure conditions. This is normally the reason why direct acting relief valves are available only in relatively smaller sizes.

A partial hydraulic circuit consisting of a pump and a pressure relief valve has been depicted in Figure 6.17. The pump and the relief value are symbolically represented.

A compound pressure relief valve is one which operates in two stages. They are designed to accommodate higher pressures than direct acting relief valves at the same flow rate capacity. To have a broad understanding of how a compound pressure relief is internally designed, a cutaway view of an actual valve manufactured by Vickers INC., Detroit is shown in Figure 6.18. 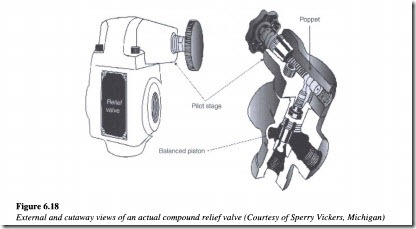 The first stage of the pilot relief valve includes the main spool which is normally closed and kept in position by a non-adjustable spring. The pilot stage is located in the upper valve body and contains a pressure-limiting poppet, which is held against a seat by an adjustable spring. The lower body contains the port connections. The balanced piston in the lower part of the body accomplishes diversion of the full pump flow.

In normal operation, the balanced piston is in a condition of hydraulic balance. Pressure at the inlet port acts on both sides of the piston, through an orifice, that is drilled through the large land. For pressures less than the valve setting, the piston is held on its seat by a light spring. As soon as the pressure reaches the setting of the adjustable spring, the poppet is forced off its seat. This limits the pressure in the upper chamber. The restricted flow through the orifice into the upper chamber results in an increase in pressure in the lower chamber. This causes an imbalance in the hydraulic forces, which tends to raise the piston off its seat. When the pressure difference between the upper and the lower chamber reaches approximately 1.5 kg/cm2 (approx. 21 psi) the large piston lifts off its seat to permit flow directly to the tank.

If there is a flow increase through the valve, the piston lifts further off its seat. However, this compresses only the light spring and hence very little override occurs. Compound relief valves can also be operated remotely by using the outlet port from the chamber above the piston. This chamber in turn can be vented to the tank through a solenoid-operated direction control valve. 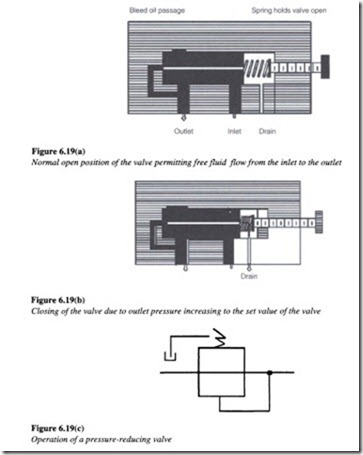 Practical application of a pressure reducing valve in a hydraulic system

A pressure-reducing valve is placed just before cylinder B in the hydraulic circuit as shown. This arrangement allows flow to the cylinder, until the set pressure value on the valve is reached. At this point where the set pressure is reached, the valve shuts off, thereby preventing any further buildup of pressure. The fluid is bled to the tank through the drain valve passage resulting in the easing-off of the pressure, as a result of which the valve opens again. Finally a reduced modulated pressure equal to the valve results.

Unloading valves are remotely piloted, normally closed pressure control valves, used to direct flow to the tank when pressure at a particular location in a hydraulic circuit reaches a predetermined value. Figure 6.21 depicts the sectional view of a typical unloading valve used in hydraulic systems. 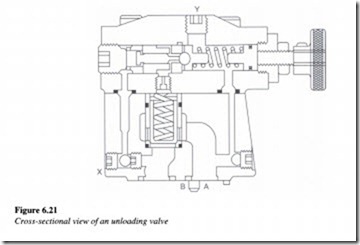 The unloading valve in Figure 6.21 is used to unload pressure from the pump connected to port A, when the pressure at port X is maintained at a value satisfying the valve setting. The spring-loaded ball exercises control over the high-flow poppet along with the pressure applied at port X. Flow entering at port A is blocked by the poppet at low pressures. The pressure signal from port A passes through the orifice in the main poppet to the top side area and then to the ball. There is no flow through these sections of the valve until the pressure rise equals the maximum value permitted by the spring-loaded ball. When that occurs, the poppet lifts causing fluid flow from port A to port B which in tum is connected to the tank. The pressure signal at port X acts against the solid control piston and forces the ball further off the seat. Due to this, the topside pressure on the main poppet reduces and allows flow from port A to B with a very low-pressure drop, as long as the signal pressure at port X is maintained.

This system shown above is designed for providing a rapid return on the work cylinder. In this system, the net total displacement of both the pumps is delivered to the work cylinder until the load is contacted. At this point there is an increase in system pressure and this causes the unloading valve to open. This results in the flow from the high displacement pump getting directed back to the tank at a minimal pressure. The low volume pump continues to deliver flow for the higher pressure requirement of the work cycle. For facilitating rapid return of the cylinder, flow from both the pumps is again utilized.