Process control pneumatics is also concerned with sequencing i.e. performing simple actions which follow each other in a simple order or with an order determined by sensors. Electrical equivalent circuits are formed with relays, solid state logic or programmable controllers.

A simple example of a pneumatic sequencing system is illustra­ted in Figure 7.27, where a piston oscillates continuously between two striker-operated limit switches LS 1 and LS2 • These shift the main valve V 1 with pilot pressure lines. The main valve spool has no spring return and remains in position until the opposite signal is applied. Shuttle valves V2 and V3 allow external signals to be applied via ports Y and Z. 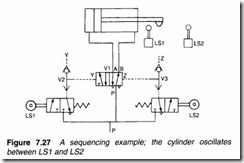 structed as illustrated in Figure 7.28a. Input signal X is a pilot signal moving the spool in main valve V 1, but it is delayed by the restriction valve and the small reservoir volume V. When X is applied, pilot pressure Y rises exponentially giving a delay T before the pilot operating pressure is reached. When X is removed, the non-return valve quickly vents the reservoir giving a negligible off delay. Figure 7.28b shows the response. As shown, the valve is a delay-on valve. If the non-return valve is reversed delay-off action is achieved.

Sequencing valves are used to tie pressure-controlled operations together. These act somewhat like a pilot-operated valve, but the