In this section problems relating to the system are considered, other than throughput problems which were considered in Chapters 20 and 21. One part is concerned essen- tially with environmental factors such as altitude, temperature variations and condensa- tion. Another part deals with physical problems that can happen to the system such as an explosion, bends eroding and electrostatic discharges. Many of these problems are caused directly by the material being conveyed. They are considered in this section since the problem may not initially be recognized in terms of the material being conveyed.

The operation of a pneumatic conveying system at altitude should present no problems at all, provided that due account has been taken of the local air pressure, and hence density of the air. This will influence the specification of the air mover since the volumetric flow rate is generally quoted in terms of free air (see Equation (9.10) and Figure 9.21). It will also influence the size of the filter required, as discussed above in the section on component related problems.

For a plant located at an elevation of 1000 m above sea level, for example, there is a reduction in ambient pressure of about 11.4 kN/m2 or 85 mmHg, which is more than 10 per cent of the standard atmospheric pressure at sea level. The normal atmospheric pressure at sea level can fluctuate quite naturally by ±25 mmHg on a day to day basis, which equates to a change in elevation of about 300 m.

Condensation is liable to occur in pipelines that are subject to large temperature vari- ations, particularly where there are pipe runs outside buildings, and air drying is not employed. This problem is considered in detail in Chapter 25.

Pneumatic conveying systems are known to be prolific generators of static electricity. In a large number of cases the amount of charge generated is too small to have any noticeable effect, but sometimes appreciable generation can occur. Very often, this is just a nuisance, but occasionally it can present a hazard. The electrostatic problem can be reduced by earthing the pipeline and ensuring that electrical continuity is main- tained across all flanged joints. The humidity of the conveying air can also be used as a means of controlling static build-up. The use of humidity for charge control, how- ever, is clearly not suitable if the material being conveyed is hygroscopic, or where condensation might be a problem.

If the hardness of the particles to be conveyed is higher than that of the system compo- nents, such as feeders and pipeline bends, then erosive wear will occur at all surfaces against which the particles impact. Erosion is wear caused by the impact of particles against surfaces, and the angle of impact is a major variable in the wear process. Abrasive wear is caused by the sliding of particles against surfaces. Abrasive wear can be a problem with hoppers, chutes and cyclones, but in pneumatic conveying systems erosive wear can be an order of magnitude more serious. As a consequence Chapter 23 is devoted entirely to the subject of Erosive Wear.

There is a wide range of material which, in a finely divided state, dispersed in air, will propagate a flame through the suspension if ignited. These materials include foodstuffs such as flour, sugar and cocoa, synthetic materials such as plastics, chemical and phar- maceutical materials, metal powders and fuels such as coal and wood. Research has shown that the particle size must be below about 200 µm for a hazard to exist.

It is virtually impossible to avoid dust cloud formations in pneumatic conveying. Even when the material being conveyed consists of particles larger than 200 µm, con- sideration must be given to the production of fines during conveying which may result in an explosion hazard being created in the receiving vessel. This is another topic that clearly requires serious consideration and so the problem is reviewed and a range of solutions are presented in Chapter 26.

Difficulties can be experienced with low velocity dense phase conveying, however, since conveying line inlet air velocities can be very much lower. In a programme of tests carried out with a 1260 kg batch of cement a note of the mass of cement that could not be conveyed to the reception hopper was made, as part of the recorded information taken in determining the conveying characteristics for the material in the test pipeline. The results are presented in Figure 22.5 [1]. 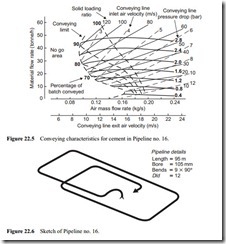 The bends in the test pipeline were of quite long radius and so did not present a problem in purging. Some of the bends used in pneumatic conveying pipelines, however, such as the pocketed bends, may take a considerable time to be purged clear of mater- ial. This is particularly the case with bind tee bends such as that shown in Figure 5.1a.

A residue of material may also be left in the feeding device and this is particularly so with top discharge blow tanks as mentioned in Section 4.4.1.1. This is a particular advan- tage of the bottom discharge type since the entire contents can usually be discharged.

This entire problem of purging must be given serious consideration if a system is required to convey a number of different materials and cross-contamination must be avoided.

To recap briefly on some of the points made earlier; if the material being handled is abrasive, wear of feeding devices, such as screws and rotary valves, will occur. This will result in an increase in air leakage across the feeder and hence a reduction in the air flow rate available to convey the material. In vacuum, closed loop and combined systems, wear of the air mover may occur if the filtration system is not sufficiently effi- cient. This will result in a gradual deterioration in performance of the air mover. Pipelines and bends are considered in Chapter 23.

For a plant subject to operating in extremes of temperature, from summer to winter and/or day to night, consideration will have to be given to the problems of condensation and changes in conveying air velocity. Air density increases with decrease in temperature, and so if a conveying air velocity is 15 m/s at 40°C, it will be about 12 m/s at -20°C for the same free air flow rate. The influence of conveyed material temperature must also be taken into account as considered in Section 9.6.1. Condensation may occur in pipelines subject to large temperature variations as discussed in Section 20.2.3.1. Chapter 25 is devoted to the topic of moisture and condensation in pneumatic conveying systems.