The helical lobe, or screw, compressor has two or more mating sets of lobe-type rotors mounted in a common housing. The male lobe or rotor is usually direct-driven by an electric motor. The female or mating rotor is driven by a helical gear set that is mounted on the outboard end of the rotor shafts. The gears provide both motive power for the female rotor and absolute timing between the rotors.

The rotor set has extremely close mating clearance, about 0.5 mils, but without metal­ to-metal contact (Figure 14-12). Most of the rotary compressors are designed for oil­ free operation. In other words, no oil is used to lubricate or seal the rotors. Instead, lubrication is limited to the timing gears and bearings that are outside the air chamber. As a result, maintaining proper clearance between the two rotors is critical.

This type of compressor is classified as a constant-volume, variable-pressure machine and is quite similar to the vane-type rotary in general characteristics. Both have a built-in compression ratio.

Helical-lobe compressors are best suited for base-load applications where they can provide a constant volume and pressure of discharge gas. The only recommended 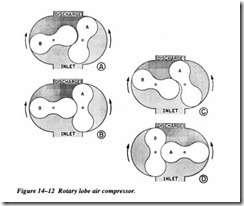 method of volume control is the use of variable-speed motors. With variable-speed drives, capacity variations can be obtained with a proportionate reduction in speed. A 50 percent speed reduction is the maximum permissible control range.

Helical-lobe compressors are not designed for frequent or constant cycles between load and no-load operation. Each time the compressor unloads, the rotors tend to thrust axially. Even though the rotors have a substantial thrust bearing and in some cases a balancing piston, to counteract axial thrust, each time the compressor unloads, the axial clearance is increased. With time, this clearance will increase enough to per­mit a dramatic increase in the impact energy created by axial thrust during the tran­sient from loaded to unloaded conditions. In extreme cases, the energy will be enough to physically push the rotor assembly through the compressor housing.

These units are primarily designed to operate dry, with nonlubricated compression chambers sealed at leakage points by close clearances. Since these clearances must be kept open at all times, any operational factors affecting them must be limited. If not, there might be sufficient expansion or distortion to cause rotor contact and consequent damage. These and other limiting factors include the following:

Discharge temperature. Discharge temperatures must be limited to prevent excessive casting distortion and rotor growth. If either occurs, the clear­ance between rotating parts will decrease and metal-to-metal contact will take place. Since the rotors typically rotate at speeds between 3,600 and 10,000 rpm, metal-to-metal contact normally results in instantaneous, cat­astrophic failure of the compressor.

Temperature rise. A limit is sometimes set to prevent excessive relative dis­tortion between the inlet and discharge ends of the casing and excessive rotor growth. The higher-pressure units are water-jacketed for uniform casing temperature. Rotors may also be cooled to permit a higher operating limit.

Pressure rise. Pressure rise is the differential pressure across the compres­sor, i.e., the difference between discharge and inlet pressure. This acts to deflect the rotor and shaft. Any bending of the rotor or its shaft changes the original clearance.

Bearing loads. Changes in differential pressures, caused by variations in either inlet or discharge conditions, will result in a change in the bearing load zone. If there is a change in either the inlet or discharge conditions, i.e., tem­perature, volume, or pressure, the rotors tend to become unstable. As a result of this instability, the load zones are changed in the shaft support bearings. The normal result is premature wear and/or failure of the bearings.

Rotary screw compressors are designed to deliver a constant volume and pressure of air or gas. Any variation in either the inlet or discharge conditions will result in rotor instability that can result in instantaneous failure of the compressor. In normal opera­tion, the compressor will generate a vibration profile that will include the following:

Rotor speeds. In a single-stage rotary screw compressor, there will be two mating rotors. The male will be directly driven by an electric motor. Typi­cally, this input speed will be between 1,800 and 3,600 rpm. The mating female rotor will normally operate at a higher speed than the male. The normal speed range for the female rotor is between 3,000 and 5,000 rpm.

In two-stage rotary screw compressors, there is a second set of mated rotors that extract compressed air from the first set and further compress the gas. Speeds on these rotors can be as much as 10,000 rpm.

Each of these rotors will generate a fundamental (lx) frequency compo­ nent at their actual running speed. Speed should be relatively uniform, but slight variations resulting from load changes may be observed.

Gear mesh. The helical timing gears that are used to synchronize the male and female rotors will generate a gear mesh profile. The rules used to mon­itor and evaluate a standard single-reduction helical gear set should be used for this application.

Bearing frequencies. Most rotary screw compressors use rolling-element bearings on both rotor shafts. The normal configuration has a large thrust or fixed bearing located on the outboard end of each shaft and float bearing on the inboard ends. These bearings should be monitored in the same man­ ner as any rolling-element bearing.

The most common reason for compressor failure or component damage is process instability. These units are extremely susceptible to any change in either inlet or dis­ charge conditions. A slight variation in pressure, temperature, or volume can result in instantaneous failure.

The following indices of instability and potential problems should be used:

Rotor mesh. In normal operation, the energy generated by the meshing of the male and female rotors will be very low level. As in the case of vane or blade passing, the peak should be narrow and have low amplitude.

Axial movement. The normal tendency of both the rotors and the helical timing gears is to generate axial movement or thrusting of the shafts. The extremely tight clearances between the male and female rotors will not tolerate any excessive axial shaft movement. Therefore, a primary monitoring parameter must be the amount of axial movement that is present in the compressor.

Axial measurements should be acquired and monitored on both rotor assemblies. If there is any increase in the vibration amplitude in these mea­ surement points, there is a high probability of compressor failure.

Thrust bearings. Although process instability can affect both the fixed and float bearings, the thrust bearing is more likely to show early degradation as a result of process instability or abnormal compressor dynamics. These bearings should be monitored closely. Any degradation or suggestion of excessive axial clearance should be corrected immediately.

Gear mesh. The gear mesh profile will also provide an indication of pro­ longed instability in the compressor. Deflection of the rotor shafts will change the wear pattern on the helical gear sets. This change in pattern will increase the backlash in the gear mesh and result in higher vibration levels as well as an increase in thrusting.