The conventional rotary valve has been developed, as mentioned above, to have a capability of feeding material into positive pressure pneumatic conveying systems at pressures of up to 3–4 bar gauge. This is as a stand-alone feeder without the use of a lock hopper. With a lock hopper there is no pressure drop across the rotary valve and so a conventional rotary valve can operate at significantly higher pressures. This point should be understood because it does tend to cause a lot of confusion.

The closed end type of rotor, illustrated in Figure 3.12b, provides a significantly more rigid construction, and it is with this type of rotor that developments with much higher pressure and lower leakage rate applications have been possible. This new generation of rotary valves are often used in low pressure systems, instead of the conventional valve, simply because of the reduced air leakage.

With an end plate it is possible to provide a seal to significantly reduce the quantity of air that leaks across the valve by this route, and a more rigid construction allows rotor tip clearances to be reduced. Air leakage via the returning empty pockets remains a problem, but by these various improvements the operating pressure differential has been improved to about 3–4 bar gauge, compared with about 1 bar gauge for the conventional rotary valve, as indicated on Figure 3.2.

Blow tanks are often employed in pneumatic conveying systems because of their capability of using high pressure air. A high pressure air supply is necessary if it is required to convey over long distances in dilute phase, or to convey at high mass flow rates over short distances through small bore pipelines. As an example of the latter, cement was conveyed at 25 tonne/h over a distance of 100 m through a 2 in. (53 mm actual) bore pipeline containing 17 bends, by the author, using a high pressure blow tank, to provide data for the first edition of this Pneumatic Conveying Design Guide.

Blow tanks are neither restricted to dense phase conveying nor to high pressure use. Low pressure blow tanks are often used as an alternative to screw feeders and rotary valves for feeding pipelines, particularly if abrasive materials have to be conveyed, as was considered in the previous chapter on ‘low pressure feeding devices’. Materials not capable of being conveyed in dense phase can be conveyed equally well in dilute phase suspension flow from a blow tank. Depending upon their pressure rating, blow tanks have to be designed and manufactured to an appropriate pressure vessel code, and are subject to insurance and inspection. They can, therefore, be more expensive than alternative feeding systems.

The blow tank has no moving parts and so both wear of the feeder and degradation of the material are significantly reduced. Another advantage of these systems is that the blow tank also serves as the feeder, and so the problems associated with feeding against an adverse pressure gradient, such as air leakage, do not arise. There will, how- ever, be a small pressure drop across the blow tank in order to achieve material feed, and so this must be taken into account when evaluating air requirements.

There are numerous different types of blow tank, and for each type alternative configurations are possible. The basic features of different blow tanks are essentially similar, but different arrangements can result in very different conveying capabilities and con- trol characteristics.

There are also a variety of blow tank configurations that are widely used. Apart from single blow tanks there are twin blow tank arrangements, with both parallel and series arrangements. Blow tanks operating in parallel basically consist of two identical blow tanks, generally placed alongside each other, and while one is being filled the other is being discharged, generally as a means of improving cycling efficiency.

Twin blow tanks that operate in series is another term for a single blow tank operating with a lock hopper and this is considered as a separate topic within this chapter. The top vessel is not a blow tank, but is the lock hopper, and this allows conveying on a continuous basis from the blow tank beneath. Due to headroom problems a further development here is to position the lock hopper alongside the blow tank.

The blow tank shown in Figure 4.2 is a top discharge type. It is shown with a discharge valve so that it can be isolated from the conveying line. It also has a vent line and valve so that it can be de-pressurized independently of the conveying line. Discharge is arranged through an off-take pipe which is positioned above the fluidizing membrane. The material is discharged vertically up and the discharge pipe exits the blow tank through the top of the vessel, and hence the term ‘top discharge’ in this case.

With this type of blow tank, however, it is not possible to completely discharge the contents, although with a conical membrane very little material will remain. Where a 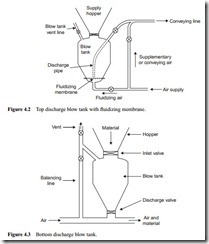 conveying system is dedicated to a single material so that cross contamination does not have to be taken into account, and the material is not time limited, this does not generally represent a problem, although the possibility must be considered. The vessel is usually flanged as shown in Figure 4.2 for convenience of access to the fluidizing membrane.

In a bottom discharge blow tank there is no membrane. Material has an uninterrupted passage to be gravity fed into the pipeline and so the contents can be completely discharged. A sketch of such a blow tank is given in Figure 4.3.

The arrangement shown in Figure 4.3 is one that is commonly found in industry. A feature of blow tanks is that most designs will work, and for most materials to be conveyed. For those materials for which it will not work very well it would be suggested that it should be modified by adding an air supply to a point close to the discharge point 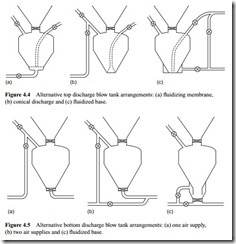 so that the material can be fluidized or aerated in this area, and that the supplementary air be introduced a short distance downstream, as shown with the blow tank illustrated in Figure 3.27.

In Figure 4.4a the discharge arrangement is ideal, with a fluidized base by means of a membrane, but this is the only air supply provided. With only one air supply the only means available of controlling the material flow rate is to vary the air flow rate, but as this additionally influences both the conveying line inlet air velocity and the conveying line pressure drop, it is not to be recommended.

The situation with regard to blow tank control is illustrated with Figure 3.28. The 100 per cent line represents the situation here and illustrates that there is little scope for control. If the conveying line to be fed is long, the pipeline is likely to block if the air supply pressure is not high enough, since the maximum material flow rate will be delivered. Only with supplementary air can the material flow rate be controlled to a lower value to match the pressure capability of the air supply.

Figure 4.4b presents a similar situation in that there is only one air supply. The situation here is potentially worse, for the air has to permeate through the material to get to the point of discharge. For materials that have a wide particle size distribution, and that de-aerate rapidly, the system is unlikely to work.

An air supply to the top of the blow tank is not essential, although it will increase the rate of pressurization. The use of the air through the base of the blow tank is particularly useful in transport applications and in situations where material is left for a period of time in a blow tank before being discharged. In both of these situations the material will tend to compact, de-aerate and consolidate and will be difficult to discharge. With fluidizing air entering at the base, also being used to pressurize the blow tank, it has the effect of stirring up the material and aerating the entire batch prior to being discharged.

It will be seen that this is a top discharge blow tank and has no membrane. A porous membrane is more effective at fluidizing material than an annular slot and so in some cases an additional air supply is taken directly to the entrance of the off-take pipe to pro- vide further fluidization in this region. This is sometimes necessary for materials with very poor air retention, for they could block the discharge pipe if only a small percent- age of the total air supply is directed to the blow tank for aerating the material and pressurizing the blow tank. At the end of the conveying cycle a small residue of mater- ial is likely to remain in the bottom of the blow tank.

The blow tank shown in Figure 4.5a has a similar deficiency to that of Figure 4.4b, with a single air supply into the top, although the bottom discharge blow tank has the advantage of gravity discharge. In this case it is quite likely to discharge material but with very little control, as discussed earlier. The application of these configurations of blow tank, therefore, is strictly limited unless air is introduced into the pipeline down- stream of the blow tank via trace lines or boosters.

The blow tank in Figure 4.5c has an aeration device similar to that shown in Figure 4.4c. The air enters into a plenum chamber and fluidizes or aerates the material in the blow tank close to the discharge point through a narrow (about 1 mm) annular slot. Under normal operation this type of aeration device will work very well. If there should be a situation in which the pressure in the blow tank is greater than that of the air supply, however, it is possible that fine materials will flow back into the plenum chamber. As a consequence of this it could become blocked and hence cease to operate effectively.

As a generalization, the top discharge type of blow tank, with fluidization of the material, is most suitable for powdered materials, and bottom discharge blow tanks are best suited to granular materials.

Fluidizing membranes may consist of a porous plastic, a porous ceramic, or a filter cloth sandwiched between perforated metal plates. The top perforated plate is required to support the filter cloth against the pressure of the air below, and the bottom plate is required to support the weight of the material in the blow tank. In top discharge blow tanks it is not usually necessary for the discharge pipe to have a conical end, as shown in Figure 4.4b, unless additional fluidization is required in this region. A sketch of such an arrangement is given in Figure 4.6.

If a porous membrane is used it is important that the fluidizing air is both clean and dry, for dust and moisture in the air will cause a gradual deterioration in performance. For powdered materials the off-take pipe needs to be spaced about 40 mm above the base or membrane. If it is further away the blow tank will simply discharge less material and hence reduce its effective capacity. If it is too close it may adversely affect the discharge rate.

The pressure drop across the blow tank represents a potential source of energy loss to the conveying system and so should be kept as low as possible. In the case of top dis- charge blow tanks this is particularly important. The discharge pipe must be kept as short as possible because the pressure gradient in this line will be very high owing to