Hard brittle materials are generally used in cases of severe erosive wear. Materials used include Ni-hard, basalt and ceramics. Ni-hard is an abrasion resistant white cast iron. It contains about 6 per cent Ni, 8.5 per cent Cr, 1.7 per cent Si and 0.5 per cent Mn and the structure can be refined by chill casting. The material has a Brinell hard- ness of 550–650, which is equivalent to a Vickers hardness of about 750 kg/mm2. 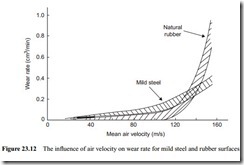 Basalt is a volcanic rock which can be cast into sections and used for lining sur- faces, and although widely used for lining chutes and hoppers, it is often used for straight pipeline and bends. After casting, the material is heat treated to transform it from an amorphous into a crystalline structure. This is a naturally hard material with a hardness, according to the Mohs’ scale of 7–8, which is equivalent to a Vickers hardness of about 720 kg/mm2. Basalt consists of approximately 45 per cent silica and 15 per cent alumina, with the rest made up of oxides of iron, calcium, magnesium, potassium, sodium and titanium.

Of the materials used for providing erosion resistance, alumina based materials are probably most common. A typical material consists of 50 per cent aluminium oxide, 33 per cent zirconium oxide and 16 per cent silicon oxide. The general industry speci- fication today is an alumina content of 85 per cent, although higher alumina contents can be supplied. It has a hardness of 9 on the Mohs’ scale, which is equivalent a Vickers hardness of about 2000 kg/mm2. Like basalt, these materials can also be cast into moulds of the required shape. 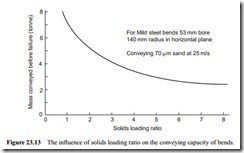 The general explanation for the gradual reduction in erosive wear with increase in solids loading ratio is that as the particle concentration increases, fewer impacts occur between the particles and the bend wall surface due to the interference of an increas- ing number of other particles. From work on the erosive wear of pipe bends the author has derived the following relationship for erosive wear:

The author has also found that the depth of penetration of particles into the bend wall surface varies with particle concentration, as with particle size reported in Section 23.2.3. As the solids loading ratio increases the particles tend to focus on a smaller area of bend wall surface such that the rate of penetration of the particles increases. In terms of the mass of metal that has to be eroded from a bend before fail- ure occurs the author has derived the following relationship:

By combining the data on the mass eroded from the bends, with that on the depth of penetration of the conveyed material into the bends, it is possible to determine a relationship for the mass of material that can be conveyed through a bend before fail- ure occurs [14]. Data for the bends investigated is presented in Figure 23.13. This is similar to the data presented on the influence of velocity in Figure 23.4. It will be seen from Figure 23.13 that as the solids loading ratio increases the life expectancy of the bends reduces quite considerably. Although the specific erosion decreases with increase in solids loading ratio, the influence of the increase in penetration rate has an over-riding effect.

It was reported earlier, with respect to particle size, and Figure 23.6, that the degree of scatter of the results increased considerably with decrease in particle size. A similar phenomenon was observed with regard to solids loading ratio, with the degree of scatter increasing considerably with increase in solids loading ratio. In terms of com- ponent life, therefore, both particle penetration rate and possible scatter in the results are potentially as important as mass eroded. Once again there was no obvious expla- nation for the occurrence, but it is possible that eddies produced and turbulence generated increase with increase in concentration.

The influence of particle shape on mass eroded has been reported by many researchers. The result is much as one might expect, for smooth and rounded particles do not cause as much erosion as sharp angular particles, under similar conditions of impact velocity and surface and particle hardnesses. For test work on the erosive wear of pipe bends in pneumatic conveying system pipelines there is generally a need to re-circulate the conveyed material. As a result of re-circulating the material, it degrades and the sharp angular corners and edges of the fresh material are gradually worn away, and they become more rounded and hence significantly less erosive [15]. This is a major problem when test facilities are used to assess component life.

It is generally thought that a highly polished surface will reduce the rate of erosive wear, but it must be emphasized that this is effectively just an incubation period. It will generally only have the effect of reducing the wear rate initially. Once the material sur- face starts to wear it will have little further influence on the steady state erosion rate. Brittle materials that have porous surfaces are particularly vulnerable to erosive wear. This can result in the casting process of these materials if gas bubbles are allowed to form. If a gas bubble results in particles impacting at an angle close to 90° extremely rapid wear will result in that area [16].