When one of the directional control valves is positioned to operate an actuating device, as shown in Figure 9-4, view B, fluid is directed from the pump through one of the working lines to the actuator. With the control valve in this position, the flow of fluid through the valve to the reservoir is blocked. Thus, the pressure builds up in the system and moves the piston of the actuating cylinder. The fluid from the other end of the actuator returns to the control valve through the opposite working line and flows back to the reservoir. 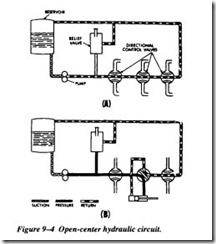 Another type of open-center directional control valve is manually engaged and pres­ sure disengaged. This type of valve is similar to the valve discussed in the preceding paragraph, but when the actuating mechanism reaches the end of its cycle and the pressure continues to rise to a predetermined pressure, the valve automatically returns to the neutral, open-flow, position.

One advantage of the open-center system is that the continuous pressurization of the system is eliminated. Since the pressure is gradually built up after the directional con­ trol valve is moved to an operating position, there is very little shock from pressure surges. This provides a smooth operation of the actuating mechanisms. However, the operation is slower than in a closed-center system, where pressure is always available the moment the directional control valve is positioned. Since most applications require instantaneous operation, closed-center systems are the most widely used.