The most common process control arrangement is probably electronic controllers with pneumatic actuators and transducers. Devices are therefore needed to convert between electrical analog

Figure 7.25 illustrates a common form of 1-P converter based on the familiar force balance principle and the flapper-nozzle. Electrical current is passed through the coil and results in a rota­tional displacement of the beam. The resulting pressure change at the flapper-nozzle gap is volume-boosted by the air relay and applied as a balancing force by bellows at the other end of the beam. A balance results when the force from the bellows (propor­tional to output pressure) equals the force from the coil (propor­tional to input electrical signal). 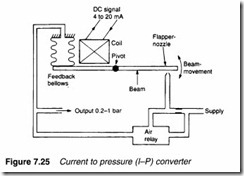 The operation of a P-1 converter. illustrated in Figure 7.26 again uses the force balance principle. The input pressure signal is applied to bellows and produces a deflection of the beam. This deflection is measured by a position transducer such as an LVDT (linear variable

differential transformer). The electrical signal corresponding to the deflection is amplified and applied as current through a coil to produce a torque which brings the beam back to the null position. At balance, the coil force (proportional to output current) matches the force from the bellows (proportional to input signal pressure).

The zero offset (4 rnA) in the electrical signal is sufficient to drive the amplifier in Figure 7.26, allowing the two signal wires to also act as the supply lines. This is known as two-wire operation. Most P-1 converters operate over a wide voltage range (eg, 15 to 30 V). Often, the current signal of 4 to 20 rnA is converted to a voltage signal (commonly in the range 1 to 5 V) with a simple series resistor.