Although suction nozzles are generally associated with mobile systems such as for spillage clearance and ship off-loading applications, they can equally be used in fixed systems for the emptying of hoppers and silos. In this application the nozzle is usually positioned close to the bottom of the hopper. A typical arrangement is illustrated in Figure 3.25.

Trickle valves, as a device on their own, are only suitable for vacuum conveying systems, since there is no pressure drop against which to feed. The greatest problem with this class of feeder is that of flow rate control, as discussed in relation to the control of venturi feeders in Section 3.4.2. A sketch of a typical device is shown in Figure 3.26.

This type of device is widely used in industry, mainly because of the cost advantage over almost any alternative method of feeding vacuum conveying systems.

In a typical 200 MW coal fired generating plant, for example, there will be thirty to forty ash hoppers. Vacuum conveying is widely used for this duty and every hopper requires a feeding device.

In this type of application the pipeline used to convey the material is generally extended a few metres ahead of the hopper. This is often done to make sure that the air inlet is in a safe place, as a health and safety requirement. It is usual to add a flow restriction in this section of pipeline, which is often a simple orifice plate. This resistance has the effect of slightly lowering the pressure in the pipeline at the material feed point and helping to promote flow.

Blow tanks are generally associated with high pressure conveying. A particular feature of the blow tank, however, is that it has no moving parts and so is ideal for the feeding of abrasive and friable materials. In this respect it is like the vacuum nozzle, but that is only for vacuum conveying. It might, therefore, be likened to the venturi feeder, but the blow tank does not generate high velocities in the feeding process and so is even more suitable for these types of material.

Since the blow tank is not a positive displacement feeder, like the rotary valve and screw, it is ideally suited to the conveying of materials having extremes of density values. Thus the one blow tank, without any modifications, would be equally cap- able of conveying iron powder having a bulk density of 4000 kg/m3 and exfoliated vermiculite having a bulk density of 80 kg/m3. The main disadvantage of the blow tank is its size and hence headroom requirements.

Since there is a requirement to convey abrasive and friable materials at low pressure, the blow tank is an ideal feeder for this purpose. It means that a positive dis- placement blower can be used to provide the air supply, rather than a compressor, and as the operating pressure is limited to 1 bar gauge, the blow tank does not have to be a coded vessel, with all the attendant inspection and insurance requirements. 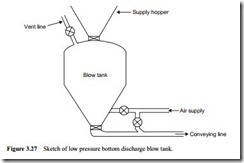 Although pressure drop was mentioned in Section 3.1.2 as an important point to con- sider with regard to feeders, it has not featured in any detail with any of the feeders considered so far as it has been marginal. With blow tanks, however, there will be a small pressure drop, the value depending upon the design, and this will be considered in more detail in the next chapter. A typical blow tank for low pressure applications is shown in Figure 3.27. This is a bottom discharge type, the term depending mostly on the direction of discharge from the vessel. As can be seen it is a batch type conveying system, but the batch size can be very large, for high tonnage duties.

As with the vacuum nozzle, flow control for a feeder having no moving parts is by air proportioning. Part of the air is directed into the blow tank to pressurize the vessel and aerate the material. The rest of the air effectively by-passes the blow tank, but is used to dilute the very high concentration of the material discharged from the blow tank to a solids loading ratio appropriate for conveying. This air flow is often referred to as the supplementary air supply.

Where the two air streams meet is effectively the start of the conveying pipeline and the air supply needs to be sufficient to achieve the required velocity for conveying the given material. Although the supplementary air supply could be introduced behind the blow tank discharge valve, which would mean that there would be no additional pressure drop due to the blow tank, the arrangement shown in Figure 3.27 is preferred. The supplementary air is introduced about 0.5–1 m downstream and it is found that this provides better flow control for most materials. With this layout the additional 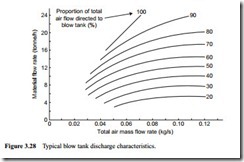 pressure drop is typically less than 0.1 bar. The nature of the flow control, by proportioning the air supply in the way described, is illustrated in Figure 3.28.

It will be seen from Figure 3.28 that the blow tank is capable of feeding material over a very wide range of flow rates. This is very much wider than could be obtained with a single rotary valve. Where blow tank systems are sold ‘off the shelf ’ they come in a small number of sizes. The lines of constant air proportion do terminate as shown in Figure 3.28 as this represents the conveying limit for the material considered, which is cement in this case. This limit is dictated by the minimum conveying air velocity, and hence the air flow rate required to achieve this value of velocity.

The 100% line represents the maximum discharge capability of the blow tank. This will be considered in the next chapter, along with alternative designs and configurations of blow tanks.