The systems illustrated above have all been single stage systems. In hydraulic conveying, for very long distance conveying, it is usual to stage systems. At the end of one stage the material is pumped back to pressure and fed into the pipeline of the next stage. Although this is perfectly possible for pneumatic conveying, it is very rare that it is ever done. Distance capability is limited with pneumatic conveying and the cost implications are probably against it. Combined systems, however, are quite common in which vacuum systems feed into positive pressure systems.

Protection has to be provided for the exhauster/blower from the possible ingress of material, as with negative pressure systems. It should be noted that the available power for the system has to be shared between the two sections, and that the pipelines for the two parts have to be carefully sized to take account of different operating pressures. Account must also be taken of the possible loss or ingress of air through material feed- ing and transfer devices.

Some air movers, such as positive displacement blowers, operate on a given pres- sure ratio, and this will mean that the machine will not be capable of operating over the same pressure range with the combined duty as compared with their individual operation. It should also be noted that although the air mover is shared between the two systems, each part of the system would require its own filtration unit. A sketch of a typical system is given in Figure 2.5.

If the conveying potential of a system requiring the vacuum pick-up of a material needs to be improved beyond that capable with a shared negative and positive pressure sys- tem, particularly in terms of conveying distance, then a dual system should be consid- ered. In this combination the two conveying elements are separated and two air movers are provided. By this means the most suitable air mover can be dedicated to the vacuum system and the most appropriate positive pressure system can be used for the onward transfer of material. 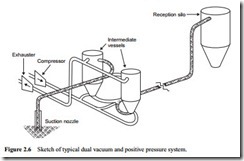 With the capability of using high pressure air for the onward conveying, dense phase conveying will be a possibility for appropriate materials. If the vacuum off-loading section is only a short distance, it is possible that the material could be conveyed in dense phase in this section also. Once again as there are two separate systems, two gas– solid separation devices also have to be provided. A sketch of a typical system is given in Figure 2.6. Filters and valves have been omitted for clarity. The various material feeding devices depicted will be considered in detail in Chapters 3 and 4.