Fluid power systems have developed rapidly over the past 35 years. Today, fluid power technology is used in every phase of human existence. The extensive use of hydraulics to transmit power is due to the fact that properly constructed fluid power systems possess a number of favorable characteristics. They eliminate the need for complicated systems of gears, cams, and levers. Motion can be transmitted without the slack or mechanical looseness inherent in the use of solid machine parts. The flu­ ids used are not subject to breakage as are mechanical parts, and the mechanisms are not subjected to great wear.

The operation of a typical fluid power system is illustrated in Figure 1-1. Oil from a tank or reservoir flows through a pipe into a pump. An electric motor, air motor, gas or steam turbine, or an internal combustion engine can drive the pump. The pump increases the pressure of the oil. The actual pressure developed depends on the design of the system.

The high-pressure oil flows in piping through a control valve. The control valve changes the direction of oil flow. A relief valve, set at a desired, safe operating pressure, protects the system from an overpressure condition. The oil that enters the cylinder acts on the piston, with the pressure acting over the area of the piston, developing a force on the pis­ ton rod. The force on the piston rod enables the movement of a load or device. 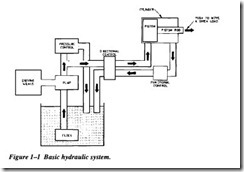 only take the shape of the containing vessel, but also expand to fill the vessel, regard­ less of its volume. Examples of the states of matter are iron, water, and air.

Matter can change from one state to another. Water is a good example. At high tem­ peratures, above 212° Fahrenheit CF), it is in a gaseous state known as steam. At mod­ erate temperatures, it is liquid, and at low temperatures, below 32″F, it becomes ice, a solid. In this example, the temperature is the dominant factor in determining the state that the substance assumes.

Pressure is another important factor that will affect changes in the state of matter. At pres­sures lower than atmospheric, 14.7 psi, water will boil and thus change to steam at tempera­ tures below 212°F. Pressure is also a critical factor in changing some gases to liquids or solids. Normally, when pressure and chilling are both applied to a gas, the gas assumes a liq­uid state. Liquid air, which is a mixture of oxygen and nitrogen, is produced in this manner.

The use of hydraulics is not new. The Egyptians and people of ancient Persia, India, and China conveyed water along channels for irrigation and other domestic purposes. They used dams and sluice gates to control the flow and waterways to direct the water to where it was needed. The ancient Cretans had elaborate plumbing systems. Archimedes studied the laws of floating and submerged bodies. The Romans con­ structed aqueducts to carry water to their cities.

After the breakup of the ancient world, there were few new developments for many centu­ries. Then, over a comparatively short period, beginning near the end of the seventeenth cen­tury, Italian physicist Evangelista Torricelli, French physicist Edme Mariotte, and later Daniel Bernoulli conducted experiments to study the force generated by the discharge of water through small openings in the sides of tanks and through short pipes. During the same period, Blaise Pascal, a French scientist, discovered the fundamental law for the science of hydraulics. Pascal’s law states that an increase in pressure on the surface of a confined fluid is transmitted throughout the confining vessel or system without any loss of pressure.

Figure 1-2 illustrates the transmission of forces through liquids. For Pascal’s law to become effective for practical applications, a piston or ram confined within a close tolerance cylinder was needed. It was not until the latter part of the eighteenth century that methods were developed that could manufacture the snugly fitted parts required to make hydraulic systems practical.

This was accomplished by the invention of machines that were used to cut and shape the necessary closely fitted parts, and particularly by the development of gaskets and packing. Since that time, components such as valves, pumps, actuating cylinders, and motors have been developed and refined to make hydraulics one of the leading meth­ ods of transmitting power.