The widespread use of fluid power in a vast majority of modern day applications is a testimony to its efficiency. Now that we are quite familiar with the design, functional and operational aspects of individual components in a hydraulic system, let us proceed further and discuss some of these common but important applications.

Most overhead trams require haulage or tow cable to travel up and down steep inclines. A 22-passenger, 12 000 pound (around 5000 kg) hydraulically powered and controlled tram is shown in Figure 9.2. 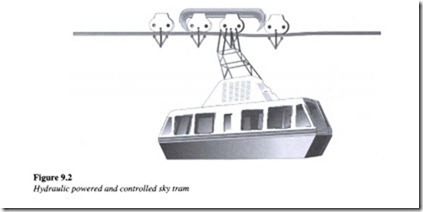 It is self-propelled and travels on a stationary cable. Since the tram moves instead of the cables, the operator can easily start, stop and reverse a particular car completely independent of any other car in the tram system.

Integral to the design of the sky tram drive is a pump (driven by a standard 8 cylinder gasoline engine) which supplies pressurized fluid to four hydraulic motors. Each of the four motors drives two friction drive wheels. Eight drive wheels on top of the cables support and propel the tramcar. On steep inclines, while a higher driving torque is required for ascending, a higher braking torque is required during descent. Dual compensation of the four hydraulic motors provides efficient proportioning of the available horsepower to meet the variable torque demands.

This system was developed by Bendix Corporation as a solution to the typically crowded engine compartments consisting of larger vacuum units. Figure 9.3 contains a schematic of this system. 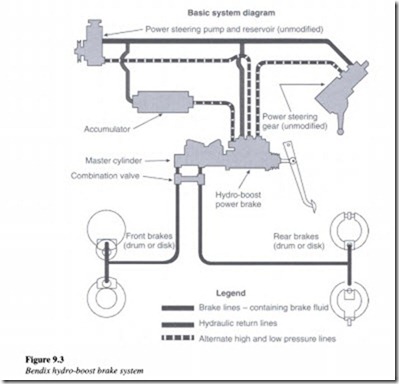 Normally mounted on the engine compartment firewall, it is designed to provide specific brake feel characteristics throughout the wide range of pedal force and travel. A spring accumulator stores energy for reverse stops.

Power steering is another automotive application developed by Bendix Corporation. This is used in conjunction with a conventional type steering gear. The hydraulic power cylinder is mounted at any convenient place where it can be connected to act directly on the steering tie rod or equivalent linkage member (Figure 9.4). Power for steering is applied in the most simplest and direct way as straight-line motion to the existing steering linkage of the vehicle. 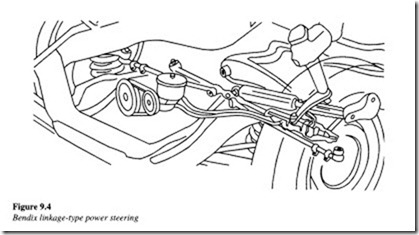 The control valve of the two-unit type installation is mounted in one of the ball joints, usually at the Pitman arm. A small movement in the valve serves to open and close the hydraulic ports and thus operate the double acting power cylinder. Installation of the power cylinder and control valve can be made without changing the existing geometry of the steering linkage.

In effect, the existing steering system including the steering gear remains intact. Likewise the system is free to operate entirely by physical effort, when the engine is not running and in the absence of hydraulic pressure.

A hydraulic system can be used for holding and positioning the parts to be welded during a welding operation. It is a typical example of how fluid power can be used in manufacturing and production operations, to reduce the overall costs and to increase production.

This application requires a sequencing system for fast and positive holding. This is accomplished by placing a restrictor (sequence valve) in the line leading to the second cylinder, as shown in Figure 9.5. The first cylinder extends to the end of its stroke.

Oil pressure then builds up, overcoming the restrictor setting and the second cylinder extends to complete the ‘hold’ cycle. This unique welding application of hydraulics was initiated to increase productivity. 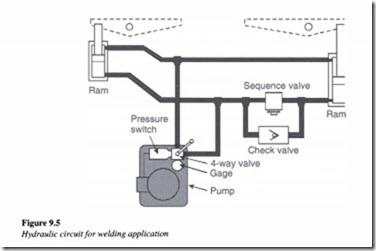 In earlier years, hydraulic systems were used as a means for removing the stress from structural members of bridges for effecting repairs and also for replacing beams. As many as four or five bulky low-pressure hand pumps and jacking ram setups were used to relieve stress in the beams that needed replacement. Labor costs were high and there were no accurate means of recording the pressures.

In recent times, modem hydraulic systems have been designed, with capacities to locate several 100 tons rams on the bridge structure. Only one portable pump is used to actuate all the rams by the use of a special manifold, thereby simplifying the operation and making it easier to remove the stress from the members that need replacement.