The influence of pressure

In Figure 9.3 the pressure ranges from 0 (atmospheric) to 0.8 bar gauge and so is appropriate to low pressure, typically dilute phase, conveying systems. If an air flow rate of 25 m3/min at free air conditions is considered it can be seen from Figure 9.3 that the actual volume at the material feed point at the start of the conveying line, will be reduced to about 14 m3/min if the air pressure is 0.8 bar gauge. Alternatively, the 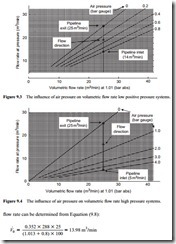 In Figure 9.4 the pressure ranges from 1.0 to 4.0 bar gauge and so is relevant to high pressure conveying systems. If the air at the material feed point is 4.0 bar gauge a free air flow rate of 25 m3/min will be reduced to about 5 m3/min, as can be seen from Figure 9.4. In both of the above cases the air will expand through the conveying line

back, approximately, to the free air value, at the discharge hopper and filtration unit at the end of the pipeline.

In the case of a vacuum system, however, free air conditions prevail at the material feed point. The air then expands beyond this and so, if the exhaust is at -0.5 bar gauge, 25 m3/min of free air will increase to about 50 m3/min, as can be seen from Figure 9.5. Alternatively, the air flow rate can be determined from Equation (9.8) once again:

It can be seen from this range of values that it is extremely important to take this com- pressibility effect into account in the sizing of pipelines, and particularly so in the case of combined positive and negative pressure systems.

If Figures 9.3 and 9.5 are used in conjunction with Figure 9.2 it will be possible to determine the resulting conveying air velocities for given conditions. An alternative to this procedure is to combine the models for actual volumetric flow rate and conveying air velocity. 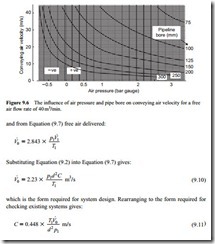 These are all graphs of conveying air velocity drawn against air pressure, with pipe bore plotted as the family of curves. The reason for this is that both conveying air 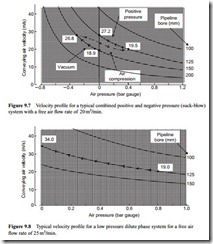 Figure 9.6 clearly illustrates the influence of pressure on conveying air velocity in a single bore pipeline. The slope of the constant pipe bore curves increase at an increasing rate with decrease in pressure. The reason for this can be seen from Equation (9.11). Conveying line inlet air pressure, p1, is on the bottom of the equation, and so as its value gets lower, small changes in its value have a more significant effect. 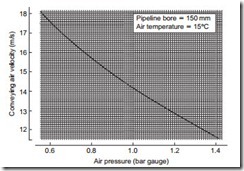 This is particularly so for negative pressure systems, and is quite dramatic at high vacuum, as shown in Figure 9.6.

On Figure 9.7 the expansion lines for a typical combined positive and negative pressure system are superimposed. This illustrates the problem of both pipeline sizing, with this type of system, and the relative expansion effects at different air pressures. With 20 m3/min of free air a 150 mm bore pipeline would be required for the vacuum line. This would give an air velocity of 18.9 m/s at the material feed point and would expand to 26.8 m/s if the exhaust was at -0.3 bar gauge.

If the pressure on the delivery side of the blower was 0.4 bar gauge a 125 mm bore pipeline would be required. This would give pick-up and exit air velocities of 19.5 and 27.2 m/s, respectively. It will be noted that the pick-up and exit air velocities are very similar for the two parts of the system, but different size pipelines are required. The free air flow rate is clearly the same for the two parts of the system and so it will be seen that it is entirely due to the influence of the conveying line inlet air pressure on the compressibility of the air. In the above case it has been assumed that the material is conveyed in dilute phase suspension flow and that the minimum conveying air velocity for the material is about 15 m/s. If a 20 per cent margin is allowed when specifying a conveying line inlet air velocity, this would need to be about 18 m/s.

The above is simply an example to illustrate the variation in conveying air velocity from feed point to material discharge in a pipeline. For the design of a conveying system Equation (9.10) would be used to evaluate the free air requirements.

The influence of air pressure on conveying air velocity is illustrated further with Figure 9.9. This is a graph of conveying air velocity plotted against air pressure, and is drawn for a free air flow rate of 30 m3/min in a 150 mm bore pipeline. During the operation of a pneumatic conveying system the conveying line inlet air pressure may vary slightly, particularly if there are variations in the feed rate of the material into the pipeline. If the feed rate increases for a short period by 10 per cent, the conveying line inlet air pressure will also have to increase by about 10 per cent in order to meet the increase in demand.