Few plant operators need to be told of the problems caused by water in compressed air. They are most apparent to those who operate pneumatic tools, rock drills, auto­ matic pneumatic powered machinery, paint and other sprays, sandblasting equipment, and pneumatic controls. However, almost all applications, particularly of 100-psig power, could benefit from the elimination of water carryover. The principal problems might be summarized as follows:

1. Washing away of required lubrication

2. Increase in wear and maintenance

3. Sluggish and inconsistent operation of automatic valves and cylinders

5. Spoilage of product by spotting in paint and other types of spraying

6. Rusting of parts that have been sandblasted

8. Further condensation and possible freezing of moisture in the exhaust of those more efficient tools that expand the air considerably 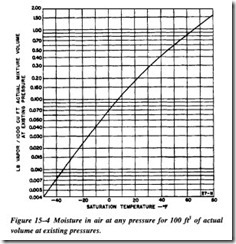 A fact to remember is that water vapor, as vapor, does no harm in most pneumatic systems. It is only when the vapor condenses and remains in the system as a liquid that problems exist. The goal, therefore, is to condense and remove as much of the vapor as is economically possible.

In conventional compressed air systems, vapor and liquid removal is limited. Most two­ stage compressors will include an intercooler between stages. On air-cooled units for 100 to 200 psig service, the air between stages is not cooled sufficiently to cause sub­ stantial liquid drop out and provision is not usually made for its removal. Water-cooled intercoolers used on larger compressors will usually cool sufficiently to condense con­ siderable moisture at cooler pressure. Drainage facilities must always be provided and used. Automatic drain traps are normally included to drain condensed water vapor.

All compressed-air systems should always include a water-cooled aftercooler between the compressor and receiver tank. In normal summer conditions, properly designed and maintained aftercoolers at 100 psig will condense up to 70 percent of the vapor entering the system. Most of this condensation will collect in the aftercooler or the receiver tank. Therefore, both must be constantly drained.

The problem with a conventional system that relies on heat exchangers (i.e., aftercool­ ers) for moisture removal is temperature. The aftercooler will only remove liquids that have condensed at a temperature between the compressed air and cooling water