Another design of internal gear pump is illustrated in Figures 3-6 and 3-7. This pump consists of a pair of gear-shaped elements, one within the other, located in the pump chamber. The inner gear is connected to the drive shaft of the power source. 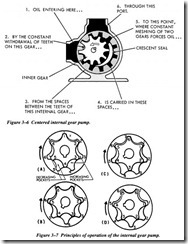 At one side of the point of mesh, pockets of increasing size are formed as the gears rotate, while on the other side the pockets decrease in size. InFigure 3-7, the pockets on the right­ hand side of the drawings are increasing in size toward the bottom of the illustration, while those on the left-hand side are decreasing in size toward the top of the illustration. The intake side of the pump would therefore be on the right and the discharge side on the left. In Figure 3-7, since the right-hand side of the drawing was turned over to show the ports, the intake and discharge appear reversed .Actually, A in one drawing covers A in the other.

The lobe pump uses the same principles of operation as the external gear pump. The lobes are considerably larger than gear teeth, but there are only two or three lobes on each rotor.A three-lobed pump is illustrated in Figure 3-8. The two elements are rotated, one directly driven by the power source, and the other through timing gears. As the ele­ ments rotate, liquid is trapped between two lobes of each rotor and the walls of the pump chamber. The trapped liquid is carried from the suction side to the discharge side of the pump chamber. As liquid leaves the suction chamber, the pressure in the suction chamber is lowered and additional liquid is pulled into the chamber from the reservoir.

The lobes are constructed so there is a continuous seal at the points where the two lobes meet at the center of the pump. The lobes of the pump illustrated in Figure 3-8 are fitted with small vanes at the outer edge to improve the seal of the pump . Although these vanes are mechanically held in their slots, they are free to move outward. Centrifugal force keeps the vanes snug against the chamber and the other rotating members.