All practical compressors work under adiabatic conditions with some heat loss. The amount of heat produced by compression is considerable which may not be an immediate disadvantage at low compression ratios, except that the air will be saturated with water vapour, some of which can be removed by aftercooling. Unless the machine specifically requires aftercooling, a low compression ratio machine may work satisfactorily uncooled (eg a single-stage centrifugal blower). If the machine does require cooling (eg in a reciprocating compressor), the necessary cooling may be achieved by finned cylinders with or without forced circulation. Unless this form of cooling is effective, the incoming charge of air will be preheated by transfer from the cylinder walls which may seriously reduce the efficiency of the compression. In general, cooling may be advantageous or necessary to achieve the following:

• Limit the amount of heating applied to the inducted charge, thus improving the efficiency of the compression and increasing the volumetric capacity.

Cool the compressed air between stages to improve compression efficiency of the second and subsequent stages.

• Reduce the temperature of the air for use when operating hand tools.

Where more than one stage of compression is involved, it is desirable from the point of view of maximum efficiency that each stage does an equal amount of work. This can only be realized if the temperature of the air into the second stage is similar to that of the air inducted into the first stage. Cooling by means of a water jacket or finned cylinders will only remove a proportion of the heat generated by compression, because not all the air passing through the compressor will come into contact with the cooled surfaces of the cylinder walls. With an efficient water cooling system applied to a reciprocating compres­ sor cylinder, only about 10 to 15% of the heat generated will be removed. Extra cooling between stages will be needed to bring the temperature down to an acceptable value. This will involve a separate heat exchanger.

An after cooler is a heat exchanger used to cool compressed air after leaving the compressor. Cooling reduces the air temperature and precipitates out water droplets which can be drained off. Aftercoolers incorporate a moisture separator for this purpose. Aftercooling reduces the volume of the air, but this presents no power loss (other than that required to run the heat exchanger).

In the case of small single stage compressors, natural air cooling may be sufficient using finned cylinders. The performance of such a compressor can be expected to vary with changes in the ambient temperature, as the effectiveness of the cooling varies with the difference in temperature between the cylinder and the ambient. Forced draft cooling is to be preferred, generated by an engine driven fan or from a power take-off on the compressor shaft, as this can provide more effective heat dissipation and more consistent heat transfer. If the compressor is located in a warm atmosphere it may be advantageous to draw the cooling air from a lower temperature source, eg through ducting led to the outside of the building. The amount of cooling required by a compressor is higher than that considered optimum for an internal combustion engine. The aim is to lower the compres­ sor temperature as far as possible rather than to maintain it at an efficient running temperature as in the case of an engine.

Forced draft air cooling may be adequate for both small and large compressors, particularly if the latter are low capacity or multi-stage machines. For the latter, the increase in temperature per stage is lower than that of a single-stage machine of the same pressure ratio. Air cooling has its limitations when the compressor has a high capacity and is run continuously.

Most larger single-stage compressors and many multi-stagecompressors are water cooled. In reciprocating compressors, the principle adopted is basically similar to that of internal combustion engine cooling, using water jackets for the cylinder barrels and cylinder heads. They can be either cored into the cylinder casings or added as fabricated jackets.

The temperature of the cooling water should be as low as possible with a high flow rate so as to keep the compressor temperature low. In a closed system, this will require a further heat exchanger to cool the circulating water, which can follow automobile practice, ie a radiator exposed to forced draft cooling from a fan. In larger installations other types of cooling can be adopted such as cooling towers. Typical water cooling requirements are shown in Table I.

• Diaphragm cooling, which implies that the air passages are water jacketed with a supply of coolant through the jackets. The diaphragm is a stationary element between the separate stages of a compressor and is kept cool by heat transfer from

the water in the jacket. This is not a particularly efficient fonn of cooling and can be supplemented by an external intercooler

• Injection cooling involves spraying a suitable liquid into the return channel of the compressor stage. In the case of a refrigeration compressor, the refrigerant itself can be used. For air compressors, water can be used, providing that the increase in water vapour can be tolerated.

• Intercooling, which may be placed between any two of the stages (eg between the third and fourth stage of a six stage machine).

flow through them is designated as either counter-current, in which the liquid to be cooled travels counter to that of the coolant; co-current in which it travels in the same direction; or cross-current in which it travels at right angles. Generally counter-current is more efficient because the temperature difference between the two fluids is greatest, but practical heat exchangers often combine all three so as to produce maximum cooling efficiency in a minimum of space.

In studying the theory of heat exchangers the fundamental equation is:

The logarithmic mean temperature difference (LMTD) needs some explanation. It will be apparent that in a heat exchanger the temperature difference between the fluid to be cooled and the coolant varies throughout the device, even under steady flow conditions. The LMTD is a way of determining an average temperature for use in the above equation. Figure 2 gives the values for LMTD when the temperature differences between the two streams at entry and exit are known. Strictly, different curves should be drawn for different configurations of tube and shell, but Figure 2 drawn for a simple counter-current form is usually good enough, particularly when the other parameters are not known with any great accuracy. 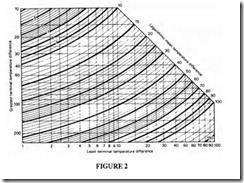 The value of K is hard to detennine theoretically, and it is best when performing calculations to use test results. A brief explanation of the method of analysis may be helpful where tests are not available. Reference to a standard work on heat exchanger theory is recommended if further infonnation is needed.

K is a combination of three factors -the convective coefficients of each t1uid and the conductance of the partition between the two. The equation relating K to the constituent coefficients is

where: h1 and h2 are the convective coefficients of the two t1uids in contact with the heat exchanger partition in W/(m2 K)

If h 1 and h2 are very different in magnitude, the larger one has little effect on the value of K, so it is good practice in efficient coolers to make the two coefficients close in value. One way of doing this is to make the two t1ow velocities approximately equal. It will be apparent that the velocity of the shell-side stream is likely to be smaller than that of the tube-side. It can be effectively increased by making the t1uid follow a tortuous path of smaller cross-section by the insertion of baft1es in the shell, Figure 3. 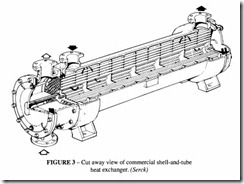 Often the contribution of the term d/k can be neglected, so we then have:

The computation of the values of h, and h2 presents a complex problem in heat transfer theory. It can be shown from dimensional analysis that the convective coefficient of the fluid is primarily dependent on theNusselt number, Nu. This is a non-dimensional quantity which plays a role in heat transfer theory analogous to that played by Reynolds number in determining the friction flow in pipes. It is given by:

whre Q is the rate of heat Joss per unit area (= Q/(tm2) and D is the significant linear dimension of the solid.

The Nusselt number has been determined experimentally for a number of cases of practical interest, and is quoted in a variety of forms according to the geometry of the heat exchanger. Some relationships, which are commonly quoted for shell-and-tube exchang­ ers experiencing turbulent flow (the usual situation), are 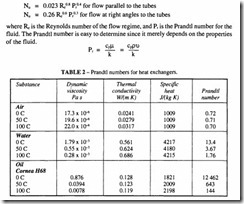 Some values of the Prandtl number for fluids of interest are given in Table 2. Reynolds number, Re, is discussed in detail in the chapter on Pipe Flow. It is defined as:

v is the velocity of flow in the pipe D is the diameter of the pipe u is the kinematic viscosity All the physical constants, with the exception of the velocity, in the Reynolds and Prandtl numbers are properties either of the construction of the heat exchanger or of the fluids, so for any given design it is possible to express the value of the Nusselt number as

The last step in determining the individual k values is the relationship between hand Nu.

Note that D for the shell is not its overall diameter but rather a dimension obtained by approximating the space between the tubes to an equivalent diameter. It is calculated as four times the ratio of the area of flow to the wetted perimeter.

The appropriate value of his found for both shell- and tube-side flows. These two are combined with the wall coefficient as in the equation quoted above to give K.

It should be emphasised that the above theoretical treatment can do no more than give an indication of the principles involved in design and most designs rely on practical experience. No account has been taken in the theoretical treatment of corrosion or the presence of layers of oil or scale on the surfaces. Regular cleaning and inspection will ensure that the heat exchanger is kept at its maximum efficiency.

One tube is fitted inside another such that a space exists between them, which is filled with a harmless heat transfer medium and kept at a pressure of at least 0.5 bar by the expansion tank. In the case ofleakage through corrosion or breakage, either the water or the oil mixes with the heat transfer medium but they cannot mix with each other; contamination is impossible. This type of heat exchanger can be used in the food or pharmaceutical industry, or for providing hot drinking water.

Portable and other compressors frequently use automobile type radiators. One form of construction uses corrugated metal sheets, laid together and dip-brazed; another type uses an aluminium cooling matrix. The designs are based on the principle of providing a large exposed area in a high conductive material.

Air is forced through by a motor driven fan. Analysis of this type of cooler is best done by the use of characteristics obtained from tests. Suppliers of coolers have comprehensive design charts for selecting the appropriate type, and much practical experience in choosing the ideal design parameters.