In certain fluid power systems, the supply of fluid to subsystems must be from more than one source to meet system requirements. In some systems an emergency system is provided as a source of pressure in the event of normal system failure. The emer­ gency system will usually actuate only essential components.

The main purpose of the shuttle valve is to isolate the normal system from an alternate or emergency system. It is small and simple, yet it is a very important component.

Figure 7-24 is a cutaway view of a typical shuttle valve. The housing contains three ports: the normal system inlet, the secondary or emergency inlet, and the normal out- 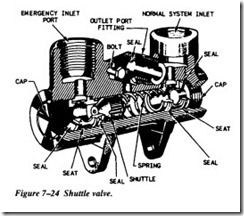 let. A shuttle valve used to operate more than one actuating unit may contain addi­ tional unit outlet ports. Enclosed in the housing is a sliding part called the shuttle. Its purpose is to seal off one or the other of the inlet ports. There is a shuttle seat at each inlet port. When a shuttle valve is in the normal operating position, fluid has a free flow from the normal system inlet port, through the valve, and out through the outlet port.

25. As the spool is moved back and forth, it either allows fluid to flow through the valve or prevents flow. In the open position, the fluid enters the inlet port and flows around the shaft of the spool, then through the outlet port. The spool cannot move back and forth by difference of forces set up within the cylinder, since the forces there 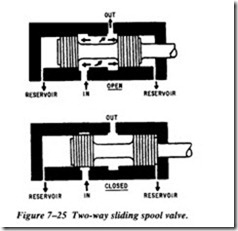 are equal. As indicated by the arrows against the pistons of the spool, the same pres­ sure acts on equal areas on their inside surfaces. In the closed position, one of the pis­ tons of the spool simply blocks the inlet port, thus preventing flow through the valve.

A number of features common to most sliding spool valves are shown in Figure 7-25. The small ports at either end of the valve housing provide a path for any fluid that leaks past the spool to flow to the reservoir. This prevents pressure from building up against the ends of the pistons, which would hinder the movement of the spool. When spool valves become worn, they may lose balance because of greater leakage on one side of the spool than on the other. In that event, the spool would tend to stick when it is moved back and forth. Small grooves are therefore machined around the sliding surface of the piston. In hydraulic valves, leaking liquid will encircle the piston and keep the contacting surfaces lubricated and centered.

Three-way valves contain a pressure port, a cylinder port, and a return or exhaust port. The three-way directional control valve is designed to operate an actuating unit in one direction. It permits either the load on the actuating unit or a spring to return the unit to its original position.

Figure 7-26A, B shows the operation of a cam-operated, three-way, poppet-type directional control valve.

View A shows fluid under pressure forcing the piston outward against a load. The upper poppet (2) is unseated by the inside cam (5), permitting fluid to flow from the 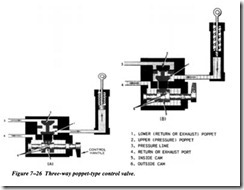 line (3) into the cylinder to actuate the piston. The lower poppet (1) is seated, sealing off the flow into the return line (4). As the force of the pressurized fluid extends the piston rod, it also compresses the spring in the cylinder.

View B shows the valve with the control handle turned to the opposite position. In this position, the upper poppet (2) is seated, blocking the flow of fluid from the pressure line (3). The lower poppet (1) is unseated by the outside cam (6). This releases the pressure in the cylinder and allows the spring to expand, which forces the piston rod to retract. The fluid from the cylinder flows through the control valve and out the return port (4). In hydraulic systems, a line to the reservoir connects the return port.

A pilot-operated, poppet-type, three-way directional control valve is shown in Figure 7-27. This valve is normally closed and is forced open by fluid pressure entering the pilot chamber. The valve contains two poppets connected to each other by a common stem. The poppets are connected to diaphragms, which hold them in a centered posi­ tion.

The pressure in the pilot port and the chamber above the upper diaphragm controls the movement of the poppet. When the pilot chamber is not pressurized, the lower poppet is seated against the lower valve seat. Fluid can flow from the supply line through the inlet port and through holes in the lower diaphragm to fill the bottom chamber. This

pressure holds the lower poppet tightly against its seat and blocks flow from the inlet port through the valve. At the same time, because of the common stem, the upper pop­ pet is forced off of its seat. Fluid from the actuating unit flows through the open pas­ sage, around the stem, and through the exhaust port.

When the pilot chamber is pressurized, the force acting against the diaphragm forces the poppet down. The upper poppet closes against its seat, blocking flow of fluid from the cylinder to the exhaust port. The lower poppet opens, and the passage from the supply inlet port to the cylinder port is open so that the fluid can flow to the actuating unit.

Figure 7-28 shows a typical four-way valve, a poppet-type directional control valve. This is a manually operated valve and consists of a group of conventional spring­ loaded poppets. The poppets are enclosed in a common housing and are intercon­ nected by ducts to direct flow of fluid in the desired direction. 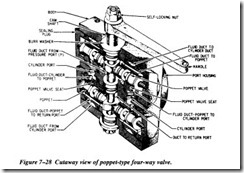 Cams on a camshaft actuate the poppets. The movement of the manual handle controls the camshaft. The valve may be operated by manually moving the handle or mechanical linkage to a control handle, which is located in a convenient place for the operator.

The camshaft may be rotated to any one of three positions: neutral and two working positions. In the neutral position, the camshaft lobes are not contacting any of the poppets. This ensures that the poppet springs will hold all four poppets firmly seated. With all poppets seated, there is no flow through the valve. This also blocks the two cylinder or work ports, so that when the valve is in neutral, the fluid in the actuating unit is trapped. Relief valves are installed in both working lines to prevent overpres­ surization caused by thermal growth and in the main system pressure line to prevent damage to system components.

1- rings are spaced at intervals along the length of the shaft to prevent external leak­ age around the end of the shaft and internal leakage from one chamber to another. The 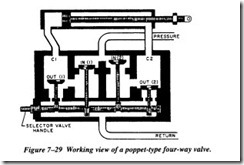 camshaft has two lobes, or raised portions. The shape of these lobes is such that when the shaft is placed in the neutral position the lobes will not contact any of the poppets.

When the handle is moved in either direction from neutral, the camshaft is rotated. This rotates the lobes, which unseats one pressure poppet and one return poppet (Fig­ ure 7-29). The valve is now in the working position. Fluid under pressure, entering the pressure port, flows through the vertical fluid passage in both pressure poppets’ seats.

Since the cam lobe unseats only one pressure poppet, IN (2), the fluid flows past the open poppet to the inside of the poppet seat. From there it flows through the diagonal passage, out one cylinder port, C2, and to the actuating unit.