Objectives of the guide

Variable speed drives in pump systems are now a mature technology, which can generate large benefits to the user in cost savings and reliability improvements, in the right applications. However it is apparent that oppor­ tunities for lower life cycle costs are being missed by continuing to use traditional control methods. Conversely there are examples of ineffective systems and wasted expenditure, caused by wrongly applying variable speed drives.

A study was carried out to find what information was available on this subject, and it became apparent that very little was specific to variable speed driven pumps. Another observation was that the few articles found, were focused on either electrical or hydraulic issues, and the interaction of the component parts of the complete system was not described.

The conclusion was that there was a real need for a comprehensive guide on variable speed pumps, motors and drives.

A further major catalyst in forming the international group of mechanical and electrical experts to create this guide, was the need for energy conser­ vation. This not only saves cost to users, but also has environmental benefits.

From studies carried out by the European Commission, it was shown that pumping systems account for nearly 22% of the world’s electric motor energy demand. In certain industrial plants over 50% of electrical energy used by motors can be for pumping systems. Figure 1.1 shows a typical split of energy usage of motor driven equipment on an industrial plant. Clearly there is scope for major savings by operating pumps more effectively and efficiently.

Figure 1.2 shows the breakdown of energy consumption by the two main pump categories. Rotodynamic pump types account for 73% and positive displacement pumps 27%, of total energy used by pumps. The 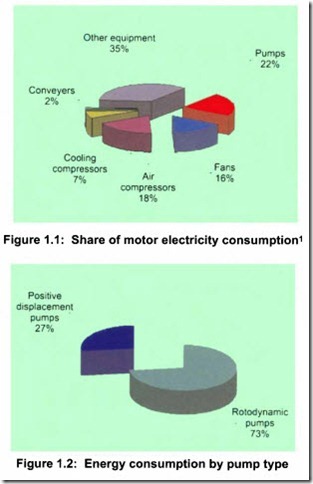 two types have quite different characteristics in response to varying operating speed, and both are described fully in this guide.

In constructing this document, the group has tried to offer hydraulic, mechanical and electrical assistance to the reader who wishes to evaluate variable speed driven pumps.

This guide includes sections on pumps, systems, motors, variable speed drives and control methods, which start with the basic principles, but progress to more advanced and detailed concepts. At all times the importance of understanding the process requirements and system design is emphasised, and the interrelation of the various elements is explained.

When the requirements of the pump and system are defined, the use of our flow charts will enable the reader to work through a logical selection process to decide if variable speed pumping is the correct choice for either new or retrofit installations.

The long term benefits are sometimes missed by apparent high initial costs, but we show how to make a life cycle cost analysis, and even how the investment need be no higher than for traditional pump system control methods.

It is essential to avoid inappropriate applications. Therefore we explain the limitations, drawbacks and operational characteristics, as well as high­ lighting the importance of reviewing potential installations on a case-by­ case basis.

This guide concentrates on electronic variable frequency drives because they have the greatest benefits, including wide ranging appli­cations, versatile control, energy saving and ease of retrofitting.

In conclusion we hope that this guide encourages the use of variable speed pumping, in appropriate applications, leading to cost savings from both reduced energy consumption and increased pump system reliability.

(Chairman of the VSD Group)

The International working group was formed from members of the pump, motor and drives industries and it is to these individuals we are all indebted for this guide. 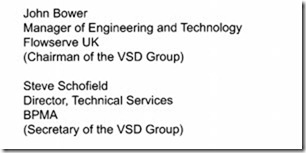 The Chairman and the Secretary of the working group wish to thank all the team members for their contributions.

In particular a special mention should be given to the main working group members:- 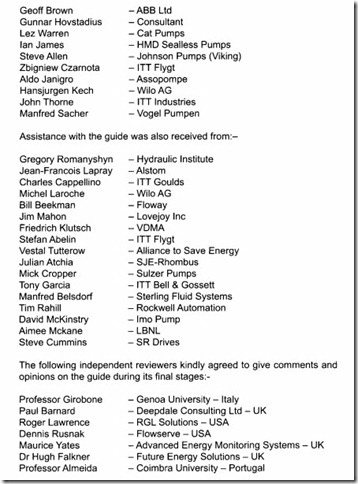