On reading this chapter, the student will be able to:

• Explain and understand the various terms and definitions used in hydraulics

• Understand the significance of Pascal’s law and its applications

• Understand the importance of flow and pressure in hydraulics.

Pressure along with flow is one of the key parameters involved in the study of hydraulics. Pressure in a hydraulic system comes from resistance to flow. This can be best understood from Figure 2.1.

Consider the flow from a hydraulic pump as shown. Here the pump produces only flow and not pressure. However any restriction in the flow from the pump results in the formation of pressure. This restriction or resistance to flow normally results from the load induced in the actuator. The various conductors and components of the hydraulic system such as pipes and elbows also act as points of resistance and contribute to the generation of pressure in the system.

Pressure (P) is defined as the force (F) acting normally per unit area (A) of the surface and is given by the equation:

Pressure in the SI unit is measured in terms of N/m2 also known as a Pascal. Pressure can also be expressed in terms of bar, where

Fluids are composed of molecules, which are in continuous random motion. These molecules move throughout the volume of the fluid colliding with each other and with the walls of the container as a result of which the molecules undergo a change in momentum.

Now, let us consider a surface within the fluid which is impacted by a large number of


Pressure at a point in a liquid

The pressure at any point in a fluid at rest, is given by the Hydrostatic law, which states that the rate of increase of pressure in a vertically downward direction must be equal to the specific weight of the fluid at that point.

Thus, the pressure at any point in a liquid is dependent on three factors:

1. Depth of the point from the free surface

2. Density of the liquid

3. Acceleration due to gravity.

The earth is surrounded by an envelope of air called the atmosphere, which extends upwards from the surface of the earth. Air has mass and due to the effect of gravity exerts a force called weight. The force per unit area is called pressure. This pressure exerted on the earth’s surface is known as atmospheric pressure.

Most pressure-measuring instruments measure the difference between the pressure of a fluid and the atmospheric pressure. This is referred to as gage pressure.

Absolute pressure is the sum of the gage pressure and the atmospheric pressure.

If the pressure is lower than the atmospheric pressure, its gage pressure is negative and the term vacuum is used when the absolute pressure is zero (i.e. there is no air present whatsoever). 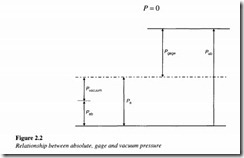 In Figure 2.2, Pa is the atmospheric pressure, Pgage is the gage pressure, Pab is the absolute pressure and pvacuum is the vacuum pressure.


Effect of pressure on boiling point

At higher altitudes, the atmospheric pressure is low, hence water boils at a temperature lower than 100 °C (212 °F). This makes cooking difficult. An important point to be noted is that adding impurities to a liquid can increase its boiling point.

The behavior of a fluid can be deduced by measuring the two critical system parameters of flow and pressure. For flow measurement, a flow transducer or transmitter has to be installed in line whereas for measuring pressure, pressure transmitters can be mounted independently with a tubing connection to the pipe, otherwise known as remote monitoring. 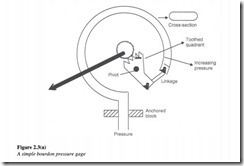 Hydraulic and pneumatic systems tend to exhibit large pressure spikes as the load accelerates and decelerates. These spikes can be misleading especially with regard to the true value measured and also end up causing damage to the pressure gage. In order to avoid this, a snubber restriction is provided to dampen the response of a pressure sensor. This has been illustrated in Figure 2.3(c).

Bourdon pressure-based transducers are robust but low-accuracy devices. For more accurate pressure measurement, transducers based on the forced balance principle are used as shown in Figure 2.4.

This is a differential pressure transducer in which a low-pressure inlet (LP) is left open to the atmosphere and a high-pressure inlet (HP) is connected to the system. The difference between the two readings (HP – LP) obtained in the form of a signal, indicates the gage pressure.

A pressure increase in the system, deflects the pressure sensitive diaphragm to the left.

This movement is detected by the transducer and which, through a servo amplifier, leads to an increase in the coil current. The current through the transducer is proportional to the differential pressure as the force from the balance coil exactly balances the force arising from the differential pressure between the LP and HP. Pressure does not depend on the shape or size of the container. 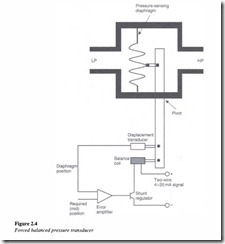