For most practical purposes, it will serve to know the relative viscosity of the fluid. Relative viscosity is determined by timing the flow of a given quantity of the hydrau­lic fluid through a standard orifice at a given temperature. There are several methods in use. The most acceptable method in the United States is the Saybolt viscosimeter (Figure 4-4).

The time it takes for the measured quantity of liquid to flow through the orifice is measured with a stopwatch. The viscosity in Saybolt Universal Seconds (SUS) equals the elapsed time.

Obviously, a thick liquid will flow slowly, and the SUS viscosity will be higher than for a thin liquid, which flows faster. Since oil becomes thicker at low temperatures and thins when warmed, the viscosity must be expressed as a specific SUS at a given temperature. Tests are usually conducted at either lOO’F or 210’F.

For industrial applications, hydraulic oil viscosity is typically approximately 150 SUS at lOO’F. It is a general rule that the viscosity should never go below 45 SUS or above 4,000 SUS, regardless of temperature. Where temperature extremes are encountered, the fluid should have a high viscosity index. 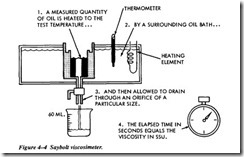 SAE numbers have been established by the Society of Automotive Engineers to spec­ify ranges of SUS viscosities of oils at SAE test temperatures. Winter numbers (5W, lOW, 20W) are determined by tests at O’F. Summer numbers (20W, 30W, etc.) desig­nate the SUS range at 2IO’F. Table 4-1 is a chart of the temperature ranges.

The following formulas may be used to convert centistokes (eSt units) to approximate Saybolt universal seconds (SUS units). For SUS values between 32 and 100: 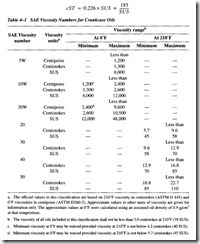 For SUS values greater than 100:

Although the viscometers just discussed are used in laboratories, there are other vis­cometers in the supply system that are available for local use. These viscometers can be used to test the viscosity of hydraulic fluids either prior to their being added to a system or periodically after they have been in an operating system for a while.

The ideal oil for most purposes is one that maintains a constant viscosity throughout tempera­ture changes. The importance of the VI can be shown easily by considering automotive lubri­cants. An oil having a high VI resists excessive thickening when the engine is cold and, consequently, promotes rapid starting and prompt circulation; it resists excessive thinning when the motor is hot and thus provides full lubrication and prevents excessive oil consumption.

Another example of the importance of the VI is the need for a high-viscosity-index hydraulic oil for military aircraft, since hydraulic control systems may be exposed to 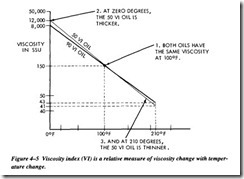 temperatures ranging from below -6YF at high altitudes to over lOO’F on the ground. For the proper operation of the hydraulic control system, the hydraulic fluid must have a sufficiently high VI to perform its functions at the extremes of the expected temperature range.

Liquids with a high viscosity have a greater resistance to heat than low-viscosity liq­uids, which have been derived from the same source. The average hydraulic liquid has a relatively low viscosity. Fortunately, there is a wide choice of liquids available for use in the viscosity range required of hydraulic liquids.

The VI of oil may be determined if its viscosity at any two temperatures is known. Tables, based on a large number of tests, are issued by the American Society for Testing and Materials (ASTM). These tables permit calculation of the VI from known viscosity.