In physics, the word specific implies a ratio. Weight is the measure of the earth’s attraction for a body, which is called gravity. Thus, the ratio of the weight of a unit volume of some substance to the weight of an equal volume of a standard substance, measured under standard pressure and temperature, is called specific gravity. The terms specific weight and specific density are also sometimes used to express this ratio:

Specific gravity and density are independent of the size of the sample and depend only on the substance of which it is made.

Viscosity is one of the most important properties of hydraulic fluids. It is a measure of a fluid’s resistance to flow. A liquid such as gasoline, which flows easily, has a low viscosity, and a liquid such as tar, which flows slowly, has a high viscosity. The vis­cosity of a liquid is affected by changes in temperature and pressure. As the tempera­ ture of liquid increases, its viscosity decreases. That is, a liquid flows more easily when it is hot than when it is cold. The viscosity of a liquid will increase as the pressure on the liquid increases.

A satisfactory liquid for a hydraulic system must be thick enough to give a good seal at pumps, motors, valves, and so on. These components depend on close fits for creating and maintaining pressure. Any internal leakage through these clearances results in loss of pressure, instantaneous control, and pump efficiency. Leakage losses are greater with thinner liquids (low viscosity). A liquid that is too thin will also allow rapid wearing of moving parts, or of parts that operate under heavy loads. On the other hand, if the liquid is too thick, viscosity too high, the internal friction of the liq­ uid will cause an increase in the liquid’s flow resistance through clearances of closely fitted parts, lines, and internal passages. This results in pressure drops throughout the system, sluggish operation of the equipment, and an increase in power consumption.

Viscosity is normally determined by measuring the time required for a fixed volume of a fluid, at a given temperature, to flow through a calibrated orifice or capillary tube. The instruments used to measure the viscosity of a liquid are known as viscosimeters.


The resistance when moving one layer of liquid over another is the basis for the labo­ ratory method of measuring absolute viscosity. Poise viscosity is defined as the force (pounds) per unit of area, in square inches, required to move one parallel surface at a speed of one centimeter per second past another parallel surface when the two sur­ faces are separated by a fluid film 1 centimeter thick (Figure 4-3). In the metric sys­ tem, force is expressed in dynes and area in square centimeters. Poise is also the ratio between the shearing stress and the rate of shear of the fluid.

The concept of kinematic viscosity is the outgrowth of the use of a head of liquid to produce a flow through a capillary tube. The coefficient of absolute viscosity, when divided by the density of the liquid, is called the kinematic viscosity. In the metric system, the unit of viscosity is called the stoke and it has the units of centimeters squared per second. One one-hundredth of a stoke is a centistoke. 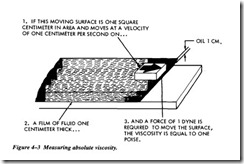 relationship between absolute and kinematic viscosity can be stated as: