Single acting cylinders are pressurized at one end only while the opposite end is vented to the atmosphere or tank. They are usually designed in such a way that a device such as an internal spring retracts them. Figure 5.2 is an illustration of the simplest form of a single acting hydraulic cylinder along with its symbolic representation.

A single acting hydraulic cylinder consists of a piston inside a cylindrical housing called a barrel. Attached to one end of the piston is a rod, which extends outside one end of the cylinder (rod end). At the other end (blank end) is a port for the entrance and exit of oil.

A single acting cylinder is pressurized at one end only i.e. it can exert a force in only the extending direction as the fluid from the pump enters the blank end of the cylinder. The opposite end is vented to the tank or atmosphere or in other words, these cylinders do not retract hydraulically. Retraction is accomplished by using gravity or by the inclusion of a compression spring at the rod end. 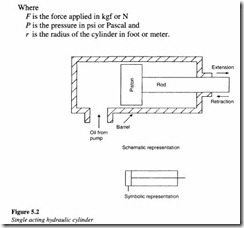 Double acting cylinders are the most commonly used cylinders in hydraulic applications. Here pressure can be applied to either port giving power in both directions. Due to the fact that these cylinders have unequal exposed areas during extend and retract operations, they are also known as differential cylinders. This difference in effective area is in turn caused by the area of the rod that reduces the piston area during retraction. Since more fluid is required to fill the piston side of the cylinder during extension, the operation is understandably slower. However because of the greater effective area, more force is generated on extension. During the retraction operation, the same amount of pump flow will retract the cylinder faster because of the reduced fluid volume displaced by the rod. However, the reduced effective area during this operation results in the generation of less force.

Figure 5.3 shows the typical construction of a double acting cylinder.

The cylinder consists of five basic parts: two end caps (a base cap and a bearing cap) with port connections, a cylinder barrel, a piston and the rod itself. This basic construction provides for simple manufacture as the end caps and pistons remain the same for different lengths of the same diameter cylinder. The end caps can be secured to the barrel by welding, through tie rods or by threaded connections.

An enlarged view of the bearing cap welded to the barrel has been illustrated in Figure 5.4.

The inner surface of the barrel needs to be very smooth to prevent wear and leakage.

Generally, a seamless drawn steel tube machined to an accurate finish is used. In applications where the cylinder is used infrequently or involves possible contact with corrosive materials, stainless steel, aluminum or brass may be used as the cylinder material. 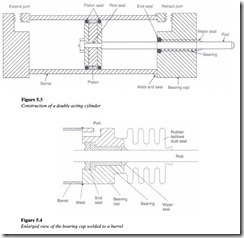 Pistons are usually made of cast iron or steel. The piston not only transmits force to the rod, but must also act as a sliding bearing in the barrel and provide a seal between the high- and low-pressure sides. Piston seals are generally used between the piston and barrel. Occasionally when small leakages can be tolerated, piston seals are not used. The usual practice is to deposit a bearing surface such as bronze onto the piston surface which is then honed to a finish, similar to that of the barrel.

The surface of the cylinder rod is exposed to the atmosphere when extended and hence is liable to suffer from the effects of dirt, moisture and corrosion. When the cylinder is retracted, contaminants of the likes of dirt, moisture and corrosive materials may be drawn back into the barrel, causing problems inside the cylinder. Heat-treated chromium alloy steel is generally used for added strength. It also doubles up as a counter against the harmful effects of corrosion.

In order to remove dust particles, these cylinders are fitted with a wiper or scraper seal fitted to the end cap. In dusty atmospheres, external rubber bellows may also be used to prevent the entry of dust. This mounting arrangement of the rubber bellow seal is shown in the Figure 5.3 above.

In order to prevent the leakage of fluid on the high-pressure side along the rod, an internal sealing ring is fitted behind the bearing. In some designs, the wiper seal and the bearing and sealing rings are combined to form a cartridge assembly in order to simplify maintenance. The rod is normally attached to the piston via a threaded end. In order to prevent leakage along the rod, cap seals are provided. These combine the roles of piston and rod seals or act as a static 0-ring around the rod as shown in the Figures 5.5(a) and (b). 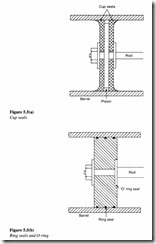 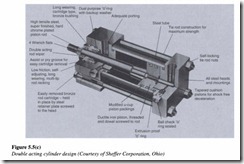 Ideally, the stroke of a simple cylinder should be less than the barrel length, giving at best an extended/retracted ratio of 2: 1. Where there is restriction in space, a telescopic cylinder can be used. The following Figure 5.6 shows a typical double acting cylinder with two pistons.

To extend the rod, fluid pressure is applied to port A. It is applied on both sides of the piston 1 via ports X and Y, but the difference in areas between the sides of piston 1, causes the piston to move to the right.

To retract the rod, fluid is applied to port B. When piston 2 is fully driven to the left, the port Y gets connected to port B, applying pressure to the right side of the piston 1, which then retracts.