There is an almost universal lack of standardisation of units used for measurement in industry, and every engineer will tell tales of gauges indicating, say, velocity in furlongs per fortnight. Hydraulics and pneumatic systems suffer particularly from this characteristic, and it is by no means unusual to find pressure indicated at different loca­ tions in the same system in bar, kpascal and psi.

There is, however, a welcome (and overdue) movement to standardisation on the International System (SI) of units, but it will be some time before this is complete. The engineer will therefore encounter many odd-ball systems in the years to come. 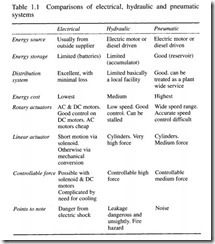 Any measurement system requires definition of the six units used to measure:

The old British Imperial system used units of foot, pound and second (and was consequently known as the fps system). Early metric systems used centimetre, gramme and second (known as the cgs system), and metre, kilogramme and second (the mks system). The mks system evolved into the Sf system which introduces a more logical method of defining force and pressure (discussed in later sections). Table 1.2 gives conversions between basic simple units. 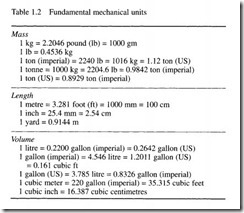 Pneumatic and hydraulic systems generally rely on pressure in a fluid. Before we can discuss definitions of pressure, though, we must first be clear what is meant by everyday terms such as weight, mass and force.

We all are used to the idea of weight, which is a force arising from gravitational attraction between the mass of an object and the earth. The author weighs 75 kg on the bathroom scales; this is equivalent to saying there is 75 kg force between his feet and the ground.

The British Imperial fps system and the early metric systems link mass and weight (force) by defining the unit of force to be the grav­ itational attraction of unit mass at the surface of the earth. We thus have a mass defined in pounds and force defined in pounds force (lbs f) in the fps system, and mass in kilogrammes and force in kg f in the mks system.

Strictly speaking, therefore, bathroom scales which read 75 kg are measuring 75 kg f, not the author’s mass. On the moon they would read 12.5 kg f, and in free fall they would read zero.

If a force is applied to a mass, acceleration (or deceleration) will result as given by the well known formula:

The SI unit of force, the newton (N), is defined not from earth’s gravity, but directly from expression 1.1. A newton is defined as the force which produces an acceleration of 1 m s-2 when applied to a mass of 1 kg.

but as most instruments on industrial systems are at best 2% accu­ rate it is reasonable (and much simpler) to use:

Pressure occurs in a fluid when it is subjected to a force. In Figure

1.4 a force F is applied to an enclosed fluid via a piston of area A.

This results in a pressure P in the fluid. Obviously increasing the force increases the pressure in direct proportion. Less obviously, though, decreasing piston area also increases pressure. Pressure in the fluid can therefore be defined as the force acting per unit area, or:

Although expression 1.2 is very simple, there are many different units of pressure in common use. In the Imperial fps system. for example, F is given in lbs f and A is given in square inches to give pressure measured in pound force per square inch (psi).

In metric systems, F is usually given in kgf and A in square centi­ metres to give pressure in kilogram/force per square centimetre (kg f cm-2).

Pressure can also arise in a fluid from the weight of a fluid. This is usually known as the head pressure and depends on the height of fluid. In Figure 1.5 the pressure at the bottom of the fluid is direct­ ly proportional to height h.

In the Imperial and metric systems head pressure is given by:

where p is the density and h the height (both in the correct units) to give Pin psi or kg cm-2.

In the SI system expression 1.3. is re-arranged as:

where g is the acceleration due to gravity (9.81 ms-2) to give the pressure in pascal.

We live at the bottom of an ocean of air, and are consequently subject to a substantial pressure head from the weight of air above us. This pressure, some 15 psi, 1.05 kg f cm-2, or 101 kPa, is called an atmosphere, and is sometimes used as a unit of pressure.

It will be noted that 100 kPa is, for practical purposes, one atmos­ phere As this is a convenient unit for many applications 100 kPa (105 Pa or 0.1 MPa) has been given the name bar. Within the accuracy of instrumentation generally found in industry 1 bar = 1 atmosphere.

In Figure 1.6b the low pressure input port is open to atmosphere, so the pressure transmitter indicates pressure above atmospheric pressure. This is known as gauge pressure, and is usually denoted by a g suffix (e.g. psig). Gauge pressure measurement is almost universally used in hydraulic and pneumatic systems (and has been implicitly assumed in all previous discussions in this chapter). 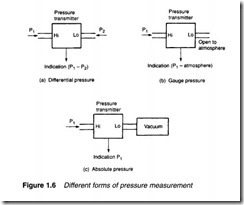 Figure 1.6c shows the pressure transmitter measuring pressure with respect to a vacuum. This is known as absolute pressure and is of importance when the compression of gases is considered. The relationship between absolute and gauge pressure is illustrated in Figure 1.7. Pressure measurement and gas compression are dis­ cussed in later sections. Table 1.4 compares units of pressure. A typical hydraulic system operates at 150 bar, while typical pneumatic systems operate at 10 bar.

Work is done (or energy is transferred) when an object is moved against a force, and is defined as:

Power is the rate at which work is performed:

The SI unit of power is the watt, defined as 1 J s-1. This is by far the most common unit of power, as it is almost universally used for the measurement of electrical power. 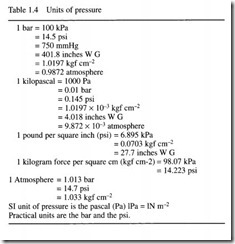 Work can be considered as the time integral of power (often described loosely as total power used). As electrical power is measured in watts or kilowatts (1 kW= 103W), the kilowatt hour (kW h) is another representation of work or energy.

The term torque is used to define a rotary force. and is simply the product of the force and the effective radius as shown in Figure 1.8. We thus have: 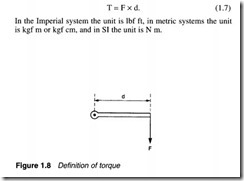