Liquids are almost incompressible. For example, if a pressure of 100 pounds per square inch, psi, is applied to a given volume of water that is at atmospheric pressure, the volume will decrease by only 0.03 percent. It would take a force of approximately 32 tons to reduce its volume by 10 percent; however, when this force is removed, the water immediately returns to its original volume. Other liquids behave in about the same manner as water.

Another characteristic of a liquid is the tendency to keep its free surface level. If the sur­face is not level, liquids will flow in the direction that will tend to make the surface level.

In the study of fluids at rest, we are concerned with the transmission of force and the factors that affect the forces in liquids. Additionally, pressure in and on liquids and factors affecting pressure are of great importance.

Pressure is the amount of force applied to each unit area of a surface and is expressed in pounds per square inch, lb/in2 (psi) or grams per square centimeter, grn/cm2• Pres­ sure may be exerted in one direction, in several directions, or in all directions.

A formula is used in computing force, pressure, and area in fluid power systems. In this formula, P refers to pressure, F indicates force, and A represents area. Force equals pressure times area. Thus, the formula is written

Atmospheric pressure decreases by approximately 1.0 psi for every 2,343 feet of ele­vation. At elevations below sea level, such as in excavations and depressions, atmo­spheric pressure increases. Pressures under water differ from those under air only because the weight of the water must be added to the pressure of the air.

Atmospheric pressure does not vary uniformly with altitude. It changes more rapidly at lower altitudes because of the compressibility of air, which causes the air layers close to the earth’s surface to be compressed by the air masses above them. This effect, however, is partially counteracted by the contraction of the upper layers due to cooling. The cooling tends to increase the density of the air.

The foundation of modern hydraulics was established when Pascal discovered that pressure in a fluid acts equally in all directions. This pressure acts at right angles to the containing surfaces. If some type of pressure gauge, with an exposed face, is placed beneath the surface of a liquid (Figure 2-2) at a specific depth and pointed in different directions, the pressure will read the same. Thus, we can say that pressure in a liquid is independent of direction. 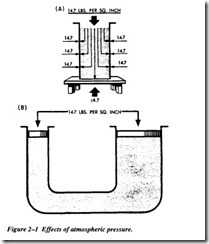 Pressure due to weight of a liquid, at any level, depends on the depth of the fluid from the surface. If the exposed face of the pressure gauge in Figure 2-2 is moved closer to the surface of the liquid, the indicated pressure will be less.

When the depth is doubled, the indicated pressure is also doubled. Thus, the pressure in a liquid is directly proportional to the depth. Consider a container with vertical sides (Figure 2-3) that are 1 foot high and 1 foot wide. 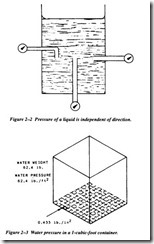 this information and the equation for pressure we can calculate the pressure on the bottom of the container.

If we let A equal any cross-sectional area of a liquid column and h equal the depth of the column, the volume becomes Ah. Using the equation D = w;v, the weight of the liquid above area A is equal to AhD, or

Since pressure is equal to the force per unit area, set A equal to 1. Then the formula for pressure becomes

Pascal was also the first to prove by experiment that the shape and volume of a con­tainer in no way alters pressure. Thus, in Figure 2-4, if the pressure due to the weight of the liquid at a point on horizontal line H is 8 psi, the pressure is 8 psi everywhere at level H in the system.