Check valves only allow flow in one direction and, as such, are similar in operation to electronic diodes. The simplest construction is the ball and seat arrangement of the valve in Figure 4.19a, com­monly used in pneumatic systems. The right angle construction in Figure 4.19b is better suited to the higher pressures of a hydraulic 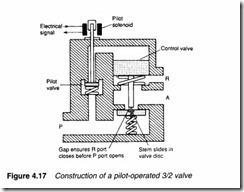 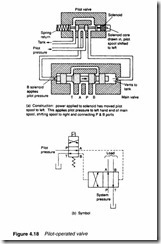 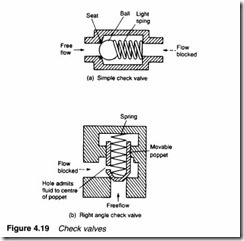 system. Free flow direction is normally marked with an arrow on the valve casing.

Figure 4.21b shows a hydraulic circuit with a pressure storage device called an accumulator (described in a later chapter). Here a check valve allows the pump to unload via the pressure regulating valve, while still maintaining system pressure from the accumu­lator.

A spring-operated check valve requires a small pressure to open (called the cracking pressure) and acts to some extent like a low pressure relief valve. This characteristic can be used to advantage. In Figure 4.21c pilot pressure is derived before a check valve, and in Figure 4.21d a check valve is used to protect a blocked filter by diverting flow around the filter when pressure rises. A check valve is also included in the tank return to prevent fluid being sucked out of the tank when the pump is turned off.

Check valves have excellent sealage in the closed position, but a simple check valve cannot be used in the system in Figure 4.22 because flow is required in both directions. A pilot-operated check is similar to a basic check valve but can be held open permanently by application of an external pilot pressure signal. 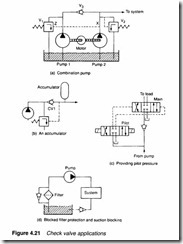 symbol of a pilot-operated check valve is shown in Figure 4.23c.

The speed of a hydraulic or pneumatic actuator can be controlled by adjusting the rate at which a fluid is admitted to, or allowed out from, a device. This topic is discussed in more detail in Chapter 5 but a speed control is often required to be direction-sensitive and this requires the inclusion of a check valve.

Figure 4.24d shows a typical application in which the cylinder extends at full speed until a limit switch makes, then extend further at low speed. Retraction is at full speed. 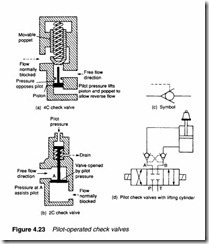