Multiple flow splitting is not a common requirement and so there are few devices avail- able. They are often required on boiler plant, where coal dust might need to be sent to the four corners of a boiler, and on blast furnaces, where coal or limestone powder might need injecting at a dozen or more different points around its circumference.

The main requirement here is generally that all of the outlets should be supplied with material, and at a uniform rate to each, despite the fact that the distance to each point will be different. The splitting is best achieved in the vertical plane, with the line sizes very carefully evaluated to provide a uniform balance for each.

Rubber hose is widely used in conveying systems for both pipeline and bends, and in systems where a degree of natural flexibility is required. Its particular properties also make it ideal for use in systems where the material being conveyed may be friable, abrasive or cohesive. Its natural flexibility makes it ideal for use in vacuum off-loading applications, mobile conveying systems and for joining pipeline sections in situations where standard pipeline bends will not match the geometry required [5].

Rubber hose has the capability of withstanding erosive wear better than steel pipeline in certain situations. Although the hardness of the surface material is generally much lower than that of alternative metal surfaces, and of the particles impacting against the surface, it derives its erosive wear resistance from the fact that it is able to absorb much of the energy of impact by virtue of its resilience. By the same mechanism, the energy of impact of friable materials is also absorbed and so particle degradation can also be reduced appreciably.

Problems of erosive wear and particle degradation are particularly severe in high velocity dilute phase conveying. Unfortunately the pressure drop for gas–solid flows through rubber hose also increases with increase in velocity, and more so than for steel pipeline. In a programme of tests with cement the author tested both steel and rubber hose and found that for low velocity, dense phase conveying, there was little difference 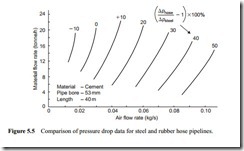 in pressure drop between the steel and rubber hose. As the air flow rate, and hence velocity was increased, however, the pressure drop through the hose increased significantly. A summary of the results is presented in Figure 5.5 [5].

The programme was repeated with barytes and a similar set of results was obtained. It is suspected that the coefficient of restitution between the particles and the pipeline wall plays an important part. Rubber, being resilient, will have a lower coefficient of restitution for impacting particles than steel. If the rubber absorbs more of the energy of impact of the particles than steel, a greater pressure drop, due to having to re-accelerate the particles from a lower velocity, will result for the rubber pipeline. This is why the pressure drop for flow through the rubber hose is greater than that through the steel pipeline; and since pressure drop increases with the square of velocity, this is why it increases with increase in conveying air velocity.

In steel pipelines, cohesive and sticky materials have a tendency to adhere to the pipeline wall and form a coating. This coating can gradually increase in thickness until it builds up to such an extent that it results in the pipeline being blocked. This is particularly the case with ultra-fine powders and materials that have a fat content, or some other substance that makes the material sticky.

If such materials are conveyed through a thin walled rubber hose, the natural movement and flexing of the hose, resulting from the pulsations of the air under pressure and the material transfer, is generally sufficient to dislodge any material that has a tendency to adhere to the pipeline wall. The pipeline needs to be supported so that it is free to move, but having sufficient support so that it is maintained reasonably straight. With the requirement for a thin walled hose capable of flexing it is limited to low pressure dilute phase conveying, but it does provide a simple and effective means of conveying this type of material.