In recent years, with increasing emphasis on power consumption, more consideration is being given to ways of reducing power. A European Union study has shown that 15 per cent of the world-wide energy consumption is used to produce compressed air. One proposal, with regard to reducing the power requirement for compressed air, is that the air should be cooled to -60°C before being compressed.

It was mentioned earlier, in relation to refrigeration drying of air, that units were available that were capable of cooling air to a temperature of -60°C. Such units form the basis of commercially available pre-cooling systems for compressors.

The idea is that all of the air to be compressed should be physically cooled to -60°C first. By this means the air will be extremely dry, so that there will be no need for a further dryer on the pressure side, and there will be no possibility of condensation occurring anywhere in the subsequent system. This will also eliminate the presence of water–oil emulsions that can occur in lubricated compressors.

For air at standard atmospheric pressure the density is 1.225 kg/m3 at a temperature of 15°C but at -60°C it is 1.657 kg/m3, which represents a 35 per cent increase. In terms of the volumetric flow rate it means that this is reduced to 74 per cent of the free air flow rate that would have to be compressed, and so a much smaller compressor can be used. Manufacturers of this type of system claim that up to a 30 per cent reduction in power consumption of compressors can be made by this means, and that plant maintenance is significantly reduced.

If atmospheric air at a temperature of 15°C is compressed to 2 bar gauge, the delivery temperature, assuming adiabatic compression and an isentropic efficiency of 70 per cent, will be about 165°C. For air at -60°C, similarly compressed, the delivery temperature will be about 50°C. In the first case the air would, for most applications, have to be cooled, and if it was not dried, condensation could well occur. With the pre- cooling system the air would probably not need to be cooled after being compressed, and being dry, there would be no possibility of condensation occurring. 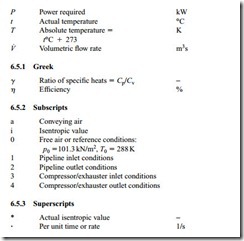