Plunger pump A plunger pump is differentiated from a piston pump in that the plunger moves past a stationary packing, whereas the piston carries the packing with it. With a modern, well designed, plunger pump there is negligible leakage past the seals and valves affording a very high volumetric efficiency, and a total efficiency (volumetric x mechanical) that can exceed 90%, on a triplex pump.

Piston pump Piston pumps have similar efficiencies to plunger pumps, but are limited to a maximum pressure of 100 bar. This is because of the problems associated with supporting the moving seal.

Effect of speed variation for plunger and piston pumps

These pumps move a discrete volume of liquid on each stroke. They are flow generators. Double the speed and the flow is doubled. The pressure function comes as a secondary result of the restriction to flow that occurs downstream of the pump. The pump has to force this positive flow against the restriction.

A pump has a maximum flow rate (hence r/min). This may be limited by any one of a number of factors: the size of the valves, the limiting speed for bearing life or the inertial loads on other components. The pump will deliver this flow rate against a backpressure. The maximum pressure is determined by the strength of the components.

In older designs where there was slip flow to lubricate the packing, the maximum efficiency could be at a lower pressure.

When the pump is run slowly and at less pressure, the mechanical energy lost can be a higher proportion of the total energy absorbed. When speed is reduced, the fall off in pump efficiency is very small until the pump is down to 1/10 of maximum speed after which the efficiency falls more rapidly. 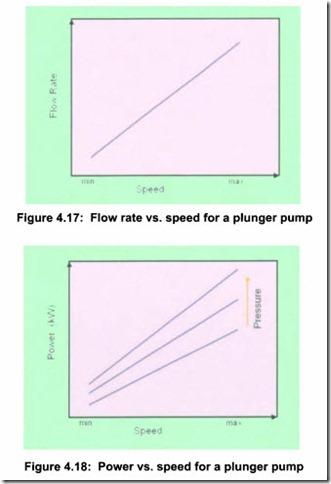 Typical performance graphs for plunger pumps, without compressibility, are shown in Figures 4.17 and 4.18.

Figure 4.19 shows typical efficiency for a plunger pump and should be used in conjunction with the Figure A6.4 in Appendix A6 to calculate the overall efficiency of pumps plus motor, at different speeds.

Performance curves for diaphragm pumps are similar to those for rotary PO pumps. Due to hydraulic slip flow or mechanical diaphragm distortion, the flow rate is also a function of pressure, losing the proportionality with r/min. The efficiency then drops with increasing pressure. 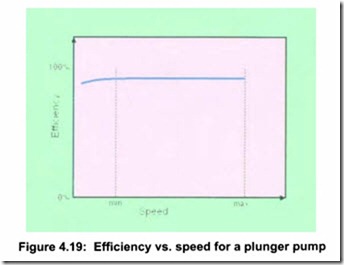 Throttling the output from a positive displacement pump does not achieve a reduction in pump flow rate, only an increase in pressure. This is a dangerous practice.

To control flow rate, the pump speed needs to change or some of the flow has to be diverted. To effect a one-off permanent change, a modified drive train can be used, (e.g. different pulley sizes) . For many applications some small flow rate changes need to be made, whilst holding pressure constant and this is best achieved with a pressure-regulating valve .

maintain a constant system pressure . This can compensate for small amounts of wear in any restricting device .

The use of such a valve to spill large volumes of liquid will be very inefficient, the loss of energy manifesting as heat and noise.

For an application where the flow rate needs to vary on a regular basis, a variable speed drive is the preferred option. This is the most efficient method of flow control and it does not waste any of the shaft input energy. The motor will be slightly less efficient at the lower speeds, the 100% T/Tn curve in Figure A6.4 .

In a rotodynamic pump, usually only small changes in speed, typically no more than 2:1, are necessary, to make significant energy savings and to move the duty point to much smaller flow rates . This results from the affinity laws, Section 4 .2.1.1, where head falls as speed squared and power as speed cubed, and also from the interaction of the pump and system curves, see Section 4.2.2.2.

For a PD pump, the flow rate is proportional to speed, but the pressure can be independent of speed. When the pump is supplying a fixed size of restriction, lowering the flow reduces the pressure in a squared relation-ship, 50% flow rate resulting in 25% of the pressure. When the pump is supplying at a fixed pressure, e.g. injecting into a high pressure main, then the pressure is constant. Consequently power and energy saving fall linearly when speed reduces. It can become a requirement to operate PD pumps over a wider speed range than rotodynamic pumps, typically up to 10:1.

This large speed range and the characteristics of PD pumps have impli­cations for both the pump and the drive train:

• There may be insufficient lubrication in the crankcase at low speeds.

• Lower or higher operating speeds may require special consideration with respect to the method or type of lubrication and/or cooling.

• The motor may not be adequately cooled at the lowest speed. A separately driven fan may need to be considered.

• The flow rate may be so low that the valve opening is too small to be sustainable under the different forces and the valve could flutter.

• The energy from the drive train inertia becomes too small to smooth the torque ripple and the motor starts to hunt. A motor running at a higher speed with a bigger drive train reduction ratio or a compen­ sating flywheel can be optional solutions.

• When pumping liquids containing solids, where the solids have a high settling rate, there may be excessive accumulation of solids in the pump and resulting wear. It is paramount when reducing speed with such liquids, that the velocity be maintained high enough, in the pump and in the pumping system, to avoid settling out of the solids.

• A change to liquid properties such as temperature and viscosity could lead to cavitation.

• Viscosity will not affect pump performance until it is sufficiently high to prevent the liquid from entering the cylinder quickly enough. If the cylinder fills, the pump will discharge the volume with no extra power consumption. Power is a function of flow rate and pressure only.

• Liquid compressibility and expansion of the pumping chamber reduces the volumetric efficiency at high pressures.

• The piping system should be designed to avoid resonance at the pump excitation frequencies, over the speed range selected.

In most pump systems there is a maximum and minimum speed at which the pump can be run satisfactorily. The pump manufacturer’s advice should be sought on this and on the best application of VSDs.