In some bulk solids handling processes intentional breakdown of the material is required, as in crushing, grinding and comminution. In many handling and storage situations, however, unintentional breakage occurs. This is usually termed degradation or attrition, depending on the mechanism of particle breakage. Bulk materials, when pneumatically conveyed, will impact against bends in the pipeline, and there may be a significant amount of particle to particle interaction. There may also be frequent impacts against the pipeline walls, and particles sliding along the pipeline walls in low velocity dense phase flows. These collisions and interactions will produce forces on the particles that may lead to their breakage.

If particle breakdown occurs easily the bulk solid is said to be friable. Tendency to par- ticle breakdown covers three main situations. The first is a tendency to shatter or degrade when the bulk solid is subject to impact or compressive loading. The second is the tendency for fines and small pieces to be worn away by attrition when bulk solids either rub against each other or against some surface, such as a pipeline wall or bend. The third is the tendency for materials such as nylons and polymers to form angel hairs when conveyed, as a result of micro-melting occurring, due to the frictional heat of particles sliding against pipeline walls.

Figure 24.1 shows the influence on the cumulative particle size distribution for the material before and after conveying. The mean particle size, based on the 50 per cent value, has changed from about 177–152 µm. The really significant effect, however, is shown in the fractional size distribution plot in Figure 24.2. In this magnified plot the effect of degradation on the material can be clearly seen. A considerable number of+ 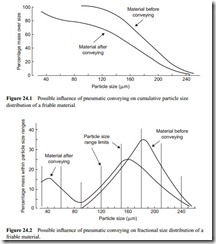 fines are produced and even on a percentage mass basis these cause a significant sec- ondary peak in the particle size distribution.