Piston motors are also similar in construction to that of piston pumps. Piston motors can be either fixed or variable displacement units. They generate torque through pressure acting at the ends of pistons, reciprocating inside a cylinder block. To put it rather simply, piston-type hydraulic motors use single-acting pistons that extend by virtue of fluid pressure acting on them and discharge the fluid as they retract. The piston motion is translated into circular shaft motion by different means such as an eccentric ring, bent axis or with the help of a swash plate.

The piston motor design usually involves incorporation of an odd number of pistons.

Piston motors are further categorized as:

Let us discuss them one by one in detail. 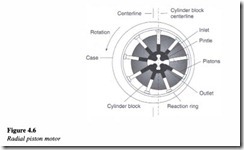 By directing the fluid to half of the cylinder bores, the pintle functions like a stationary hydraulic valve and forces the pistons outward radially. The other side of the pintle allows the fluid to be discharged from the retracting pistons. Pistons under pressure move by revolving towards the point where the track ring is farthest from the cylinder block axis.

The cylinder block and the shaft are carried by the pistons as they rotate, all the while ensuring that the pintle is lined up with the proper bores. The pistons that are not exposed to the pressure of the inlet fluid, move towards the cylinder block axis and in the process expel return oil.

The displacement in a radial hydraulic motor is a function of the total piston area as well as the eccentricity of the track ring. Radial motor applications are generally limited to higher horsepower units.

Figure 4.7 illustrates an in-line design in which the motor drive shaft and cylinder block are centered on the same axis. Here hydraulic pressure acting at the ends of the pistons generates a reaction against an angled stationary swash plate. This causes the cylinder block to rotate with a torque that is proportional to the area of the pistons. The torque is also a function of the swash plate angle. The in-line piston is designed either as a fixed or variable displacement unit. The swash plate angle generally determines the volumetric displacement. 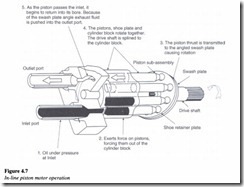 Figure 4.9 shows the schematic of a bent-axis piston motor.

In the bent-axis type piston motor too, the torque is generated by the pressure acting on the reciprocating pistons. However in this design, the cylinder block and drive shaft are mounted at an angle to each other so that the force is exerted on the drive shaft flange. 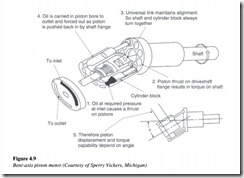 Oil entering the motor initially passes through the valve plate and then enters at the piston end exposed to the inlet port. These pistons under pressure, push against the shaft flange and as they move to the point farthest away from the valve plate, rotate the drive shaft. The function of the valve plate is to direct the oil to the proper pistons in order to keep the motor turning. Therefore in this motor type, the piston axial travel is responsible for rotation of the cylinder block.

Motor displacement is proportional to the total piston area and varies as the sine of the angle between the cylinder block axis and the output shaft axis. The speed and torque therefore depend on this angle which varies from a minimum of 7° to a maximum of 30°.

The bent-axis piston motor is a highly efficient motor and is found to have very low leakage levels compared with other motors. It has been used extensively in aircraft servo systems, although the latest design in-line motors have largely replaced them in recent times.

From a study of both the in-line and bent-axis motors, it is found that the characteristics of the in-line motor are very similar to those of the bent-axis type with the swash plate angle replacing the axis angle. The displacement in either motor can be varied by changing this angle. This notwithstanding, one major difference between the two is the reduced torsional efficiency of the in-line unit caused by the frictional drag of its shoe plate against the swash plate. Although this leads to a decrease in output horsepower along with a temperature rise, the added friction increases damping to the servo loop. The loss in torsional gain can be overcome by the inherently high-pressure gain of a normal servo valve.

The frictional losses in a hydraulic motor result in the motor delivering less torque than it should theoretically. The theoretical torque therefore is that value of torque that is delivered by a frictionless motor and can be determined by the equation for limited rotation hydraulic actuators discussed earlier, which is

P is the pressure in Pascal and

V0 is the volumetric displacement measured in m3/rev.

Thus theoretical torque is not only proportional to the pressure but also to the volumetric displacement. The theoretical power output, i.e. the power developed by a frictionless motor can be mathematically expressed as