Most pipelines are supplied having a satisfactory surface finish with regard to frictional resistance to flow. For some conveyed materials, such as polyethylene, however, a particular surface finish is required for the specific purpose of reducing the problem of ‘angel hairs’, or particle melting, with these materials. An artificially roughened surface is usually required.

Bends provide a pneumatic conveying pipeline with considerable flexibility in routing, but are the cause of many problems. Each bend will add to the overall resistance 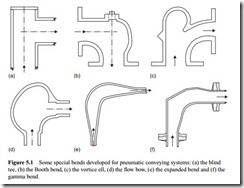 of the pipeline, and hence to the conveying air pressure required. If the conveyed material is abrasive an ordinary steel bend could fail within 2 h. An abrupt change in direction will add to the problem of fines generation with friable materials, and angel hairs will be generated in long radius bends with many synthetic materials.

Numerous different bends are available, to minimize each of the above problems. Many of these are made of, or lined with, basalt, cast iron, rubber, etc, and some have a constant bore and a constant radius, as with conventional bends. Another group of bends that have been developed, specifically for pneumatic conveying system pipe- lines, have neither constant bore nor constant radius. Some of these bends are shown in Figure 5.1. Care must be taken in selecting such bends, for account must be taken of their suitability for the material being conveyed and the pressure drop across the bend with that material.

With an abrasive material, the simple blind tee bend shown in Figure 5.1a will probably last 100 times longer than an equivalent radiused bend. It will ultimately fail around the inside corner due to turbulence. For abrasive materials, therefore, it is extremely effective, and can even be made out of scrap material. The blind end of the bend traps the conveyed material and so the oncoming material impacts against other material, instead of the bend, and thereby protects it. This is similar to the ‘dirt box’ used in many areas of bulk solids handling where surfaces have to be protected from sliding and impacting abrasive materials.

Another problem with this type of bend is that the material that is trapped in the dead end of the bend may take a long time to be purged from the bend at the end of a conveying run. It could not, therefore, be used in pipelines required for the conveying of perishable and other time limited materials.

Figure 5.1b shows a more sophisticated version of the blind tee bend that was developed in the early 1970s and is known as the Booth bend after its originator. This is a very short radius cast bend that incorporates a shallow depression. This allows material to collect in the bend and so subsequent material flowing through the pipeline will impact against itself. At the end of a conveying cycle the trapped material will be readily purged from the shallow depression in this bend. A pipe plug is provided in the back of the bend as it was well recognized that it is usually at bends that pipelines become blocked.

Another, more recent version, shown in Figure 5.1c, is the short radius bend with a large recessed chamber in the area of the primary wear point. It is claimed that this acts as a vortice and that material is constantly on the move in this pocket, thereby pro- viding a cushioning effect to oncoming material that should reduce problems of erosive wear and material degradation.

It is suggested that the expanded bend, shown in Figure 5.1e, will also help to reduce erosive wear and particle degradation [1]. Both of these operational problems are very significantly influenced by velocity. With the expansion to a larger section at the bend the air velocity is significantly reduced, with a consequent reduction in impact velocity of the particles against the bend wall. The turbulence in the bend is so great that even if the velocity falls well below the minimum value for the material, the pipeline is unlikely to block, but material may be deposited in the bend and this will be difficult to purge clear.

The gamma bend in Figure 5.1f was specifically developed to minimize the problems of angel hair formation that can occur with materials such as nylons and polymers when they slide around the wall of a conventional radiused bend.

Due to the change in direction, impact of particles against bend walls, and general turbulence, there will be a pressure drop across every bend in any pipeline. The major element of the pressure drop, however, is that due to the re-acceleration of the particles back to their terminal velocity after exiting the bend. The situation can best be explained by means of a pressure profile in the region of a bend, such as that in Figure 5.2 [2].

The pressure drop that might be recorded across the bend is quite small, and although this technique might be appropriate for single phase flows around bends, it is inappropriate for gas–solids flows. The particles leaving the bend will be at a lower velocity than that at entry and so they will have to be re-accelerated. The bend was the cause of the problem but the re-acceleration occurs in the straight length of pipeline following the bend, and so it is here that the associated pressure drop occurs, and not in the bend itself.