Pressure regulators, often referred to as unloading valves, are used in fluid power sys­tems to regulate pressure. In hydraulic systems the pressure regulator is used to unload the pump and to maintain, or regulate, system pressure at the desired values.

Not all hydraulic systems require pressure regulators. The open-center system does not require such a regulator. Many systems are equipped with variable-displacement pumps, which contain a pressure-regulating device.

Pressure regulators are made in a variety of types. However, the basic operating principles of all regulators are similar to those of the one illustrated in Figure 7-11.

A regulator is open when it is directing fluid under pressure into the system (Figure 7-11, view A). In the closed position (Figure 7-11, view B), the fluid in the part of the system beyond the regulator is trapped at the desired pressure and the fluid from the pump is bypassed into the return line and back to the reservoir. To prevent con­ stant opening and closing (chatter), the regulator is designed to open at pressure somewhat lower than the closing pressure. This difference is known as differential or operating range. For example, assume that a pressure regulator is set to open when the system pressure drops below 600 psi and close when the pressure rises above 800 psi. The differential or operating range is 200 psi.

Referring to Figure 7-11, assume that the piston has an area of I square inch, the pilot valve has a cross-sectional area of one-fourth (1/4) square inch, and the piston spring provides 600 pounds of force that pushes the piston against its seat. When the system pressure is less than 600 psi, fluid from the pump will enter the inlet port and flow to the top of the regulator, then to the pilot valve. When the system pressure at the valve inlet increases to the point where the force it creates against the front of the check valve exceeds the force created against the back of the check valve, the check valve opens. This allows fluid to flow into the system and to the bottom of the regulator against the piston. When the system force exceeds the force exerted by the spring, the piston moves up, causing the pilot valve to unseat. Since the fluid will take the path of least resistance, it will pass through the regulator and back to the reservoir through the bypass line.

When the fluid from the pump is suddenly allowed a free path to return, the pressure on the input side of the check valve drops and the check valve closes. The fluid in the system is then pressurized until a power unit is actuated or until pressure is slowly lost through normal internal leakage within the system.

When the system pressure decreases to a point slightly below 600 psi, the spring forces the piston down and closes the pilot valve. When the pilot valve is closed, the fluid cannot flow directly to the return line. This causes the pressure to increase in the

line between the pump and the regulator. This pressure opens the check valve, causing fluid to enter the system.

Sequence valves control the sequence of operation between two branches in a hydrau­lic circuit. In other words, they enable one component within the system to automati­cally set another component into motion. An example of the use of a sequence valve is in an aircraft landing gear actuating system.

A sequence valve is somewhat similar to a relief valve except that, after the set pres­ sure has been reached, the sequence valve diverts the fluid to a second actuator or motor to do work in another part of the system. Figure 7-12 shows an installation of two sequence valves that control the sequence of operation of three actuating cylin­ders. Fluid is free to flow into cylinder A. The first sequence valve (1) blocks the pas­ sage of fluid until the piston in cylinder A moves to the end of its stroke. At this time, sequence valve 1 opens, allowing fluid to enter cylinder B. This action continues until all three pistons complete their strokes. 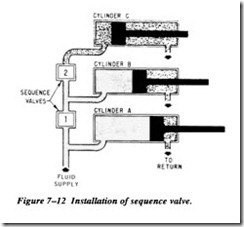 The operation of a typical pressure-controlled sequence valve is illustrated in Figure 7-13. The opening pressure is obtained by adjusting the tension of the spring that nor­ mally holds the piston in the closed position. Fluid enters the valve through the inlet port, flows around the lower part of the piston, then exits through the outlet port and flows to the primary unit. This fluid pressure also acts against the lower surface of the piston. Since the top of the piston has a larger cross-sectional area than the bottom, this flow does not cause the piston to lift.

When the primary actuating unit completes its operation, pressure in the line to the actuating unit increases sufficiently to overcome the force of the sequence valve spring and the piston rises. The valve is then in the open position. The fluid entering the valve takes the path of least resistance and flows to the secondary units.

A drain passage is provided to allow any fluid leaking past the piston to flow from the top of the valve. In hydraulic systems, this drain line is usually connected to the main return line.

The mechanically operated sequence valve (Figure 7-14) is operated by a plunger that extends through the valve body. The valve is mounted so that the primary unit will operate the plunger.

A check valve, either a ball or poppet, is installed between the fluid ports in the body. Either the plunger or fluid pressure can unseat it. Port A and the actuator of the primary unit are connected to a common line. Port B is connected by a line to the actuator of the secondary unit. When fluid under pressure flows to the primary unit, it also flows into the sequence valve. In order to operate the secondary unit, the fluid must flow through 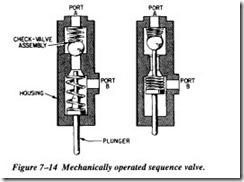 the sequence valve. The valve is located so that the primary unit depresses the plunger as it completes its operation. The plunger unseats the check valve and allows the fluid to flow through the valve, out port B, and to the secondary unit.

This type of sequence valve permits flow in the opposite direction. Fluid enters port B and flows to the check valve. Although this is return flow from the actuating unit, the fluid overcomes spring tension, unseats the check valve, and flows through port A.

Pressure-reducing valves provide a steady pressure into a part of the system that oper­ates at a pressure lower that normal system pressure. A reducing valve can normally be set for any desired downstream pressure within its design limits. Once the valve is set, the reduced pressure will be maintained regardless of changes in the supply pres­ sure and system load variations.

There are various designs and types of pressure-regulating valves. The spring-loaded reducer and the pilot-controlled valve are the most common. 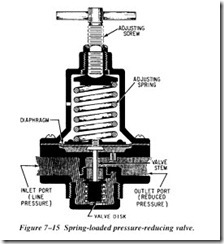 adjusting screw, which varies the spring pressure against the diaphragm. This particu­lar spring-loaded valve will fail in the open position if a diaphragm rupture occurs.