Globe valves are probably the most common valves in existence. The globe valve gets its name from the globular shape of the valve body. Other types of valves may also have globular bodies. Thus, it is the internal structure of the valve that defines the type of valve.

The inlet and outlet openings for globe valves are arranged in a way to satisfy the flow requirements. Figure 7-4 shows straight-, angle-, and cross-flow valves.

The part of the globe valve that controls flow is the disc, which is attached to the valve stem. Turning the valve stem in until the disc is seated into the valve seat closes the valve. This prevents fluid from flowing through the valve (Figure 7-5, view A). The edge of the disc and the seat are very accurately machined so that they form a tight seal when the valve is closed. When the valve is open (Figure 7-5, view B), the fluid flows through the space between the edge of the disc and the seat. Since the fluid flow is equal on all sides of the center of support when the valve is open, there is no unbal­ anced pressure on the disc that would cause uneven wear. The rate at which fluid flows through the valve is regulated by the position of the disc in relation to the valve seat. This type of valve is commonly used as a fully open or fully closed valve, but it may be used as a throttling valve. However, since the seating surface is a relatively large area, it is not suitable for a throttling valve where fine adjustment is required.

The globe valve should never be jammed in the open position. After a valve is fully opened, the handwheel or actuating handle should be turned toward the closed posi- 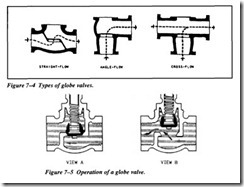 It is important that globe valves be installed with the pressure against the face of the disc to keep the system pressure away from the stem packing when the valve is shut.

Needle valves are similar in design and operation to globe valves. Instead of a disc, a needle valve has a long tapered point at the end of the valve stem. Figure 7-6 shows a cross-sectional view of a needle valve.

The long taper of the valve element permits a much smaller seating surface area than that of the globe valve. Therefore, the needle valve is more suitable as a throttling valve. Needle valves are used to control flow into delicate gauges, which might be damaged by sudden surges of fluid flow under pressure.

Needle valves are also used to control the end of a work cycle, where it is desirable for motion to be brought slowly to a halt, and at other points where precise adjust­ ments of flow rate are necessary and where a small rate of flow is desired. 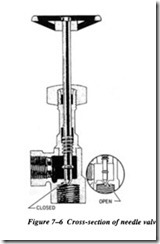 Although many of the needle valves used in fluid power systems are the manually operated types (Figure 7-6), modifications of this type of valve are often used as vari­ able restrictors. This valve is constructed without a hand wheel and is adjusted to pro­ vide a specific rate of flow. This rate of flow will provide a desired time of operation for a particular subsystem. Since this type of valve can be adjusted to conform to the requirements of a particular system, it can be used in a variety of systems. Figure 7-7 illustrates a needle valve that was modified as a variable restrictor.

The safe and efficient operation of fluid power systems, system components, and related equipment requires a means to control pressure within the system. There are many types of automatic pressure control valves. Some of them merely provide an escape for excess pressures; some only reduce the pressure; and some keep the pres­ sure within a preset range.

Some fluid power systems, even when operated normally, may temporarily develop excessive pressure. For example, when an unusually strong work resistance is encoun­ tered, system pressure may exceed design limits. Relief valves are used to control this excess pressure.

Relief valves are automatic valves used on system lines and equipment to prevent overpressurization. Most relief valves simply open at a preset pressure and shut when the pressure returns to normal. They do not maintain flow or pressure at a given level; they simply prevent pressure from rising above a specified limit. 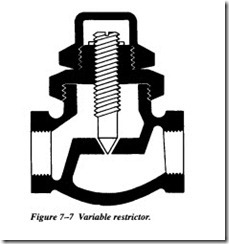 Main system relief valves are generally installed between the pump or pressure source and the first system isolation valve. The valve must be large enough to allow the full output of the hydraulic pump to be delivered back to the reservoir. This design fea­ ture, called a full-flow bypass, is essential for all hydraulic systems. The location of the valve is also critical. If the valve were installed downstream from the system isola­ tor valve, the pump could be deadheaded when the system was shut down.

Some type of locking device, such as a lock nut, is usually provided to prevent the adjustment from changing through vibration. Other types of relief valves are equipped 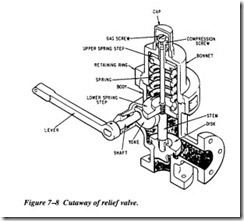 with a handwheel for making adjustments of the valve. Either the adjusting screw or the handwheel is turned clockwise to increase the pressure at which the valve will open. In addition, most relief valves are also provided with an operating lever or some type of device to allow manual cycling or opening of the valve for certain tasks, such as testing and inspection.

Various modifications of the relief valve shown in Figure 7-8 are used to efficiently serve the requirements of some fluid power applications. This relief valve is unsatis­ factory for some applications. To provide a better understanding of the operation of relief valves, we will discuss some of the undesirable characteristics of this valve.

A simple relief valve, such as the one illustrated in Figure 7-8, with a suitable spring adjustment can be set so that it will open when the system pressure reaches a certain level, 500 psi, for example. When the valve opens, the volume of flow to be handled may be greater than the capacity of the valve. If this happens, the system pressure may be increased by several hundred psi above the set pressure.

A simple relief valve will only be effective when it is sized to permit full flow of fluid at its point of installation. In undersized valves, the valve element will chatter back and forth and create turbulent flow through the valve.

Let us assume that a relief valve of this type is set to open at 500 psi. When the valve is closed, the pressure acts on area A. If this area A is 0.5 square inch, an upward force of 250 pounds (500 x 0.5) will be exerted on the valve at the moment of opening.

It follows that simple relief valves have a tendency to open and close rapidly as they “hunt” above and below the set pressure. This causes pressure pulsations and undesir­ able vibration. Because of the unsatisfactory performance of the simple relief valve in some applications, compound relief valves were developed.

Compound relief valves use the principles of operation of simple relief valves for one stage of their action-that of a pilot valve. Provision is made to limit the amount of fluid that the pilot valve must handle, which avoids the weakness of the simple valve. 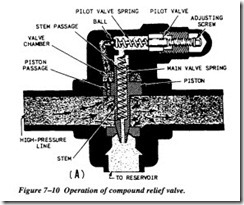 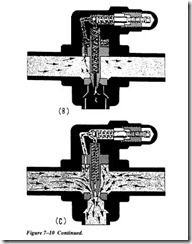 There is also a narrow passage (piston passage) through the main valve piston. This passage connects the high-pressure line to the valve chamber.

Fluid at line pressure flows through the narrow piston passage to fill the chamber. Because the line and the chamber are connected, the pressures in both are equal. The top and bottom of the main piston have equal areas. Therefore, the hydraulic forces acting upward and downward are equal and there is no tendency for the piston to

When the pressure in the high-pressure line increases to the point at which the pilot valve is set, the ball unseats (Figure 7-10, view B). This opens the valve chamber through the valve stem passage to the low-pressure return line. Fluid immediately begins to flow out of the chamber much faster than it can flow through the narrow pis­ ton passage. As a result, the chamber pressure immediately drops, and the pilot valve begins to close again, restricting the outward flow of fluid. Chamber pressure there­ fore increases, the valve opens, and the cycle repeats.

So far, the only part of the valve that has moved appreciably is the pilot, which functions just like any other simple spring-loaded relief valve. Because of the small size of the piston passage, there is a severe limit on the amount of overpressure protection the pilot can provide to the sys­ tem. All the pilot valve can do is limit fluid pressure in the valve chamber above the main piston to a preset maximum pressure, by allowing excess fluid to flow through the piston passage, through the stem passage, and into the return line. When pressure in the system increases to a value that is above the flow capacity of the pilot valve, the main valve opens, permitting excess fluid to flow directly to the return line. This is accomplished in the following manner.

As you can see, the compound valve overcomes the greatest limitation of a simple relief valve by limiting the flow through the pilot valve to the quantity it can satisfactorily han­ dle. This limits the pressure above the main valve and enables the main-line pressure to open the main valve. In this way, the system is relieved when an overload exists.